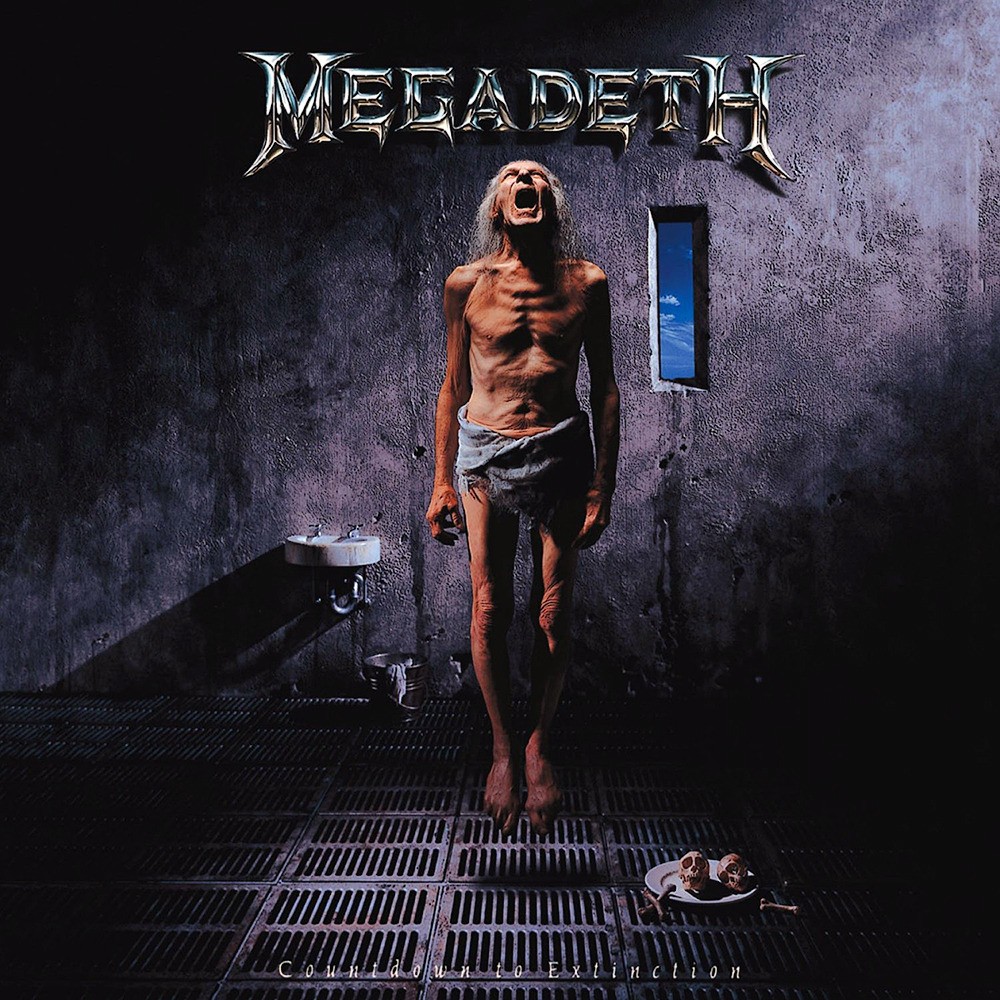 Hot off the heels of one of thrash metals most revered albums, 1990's 'Rust in Peace', Megadeth slowly started to inch away from the subgenre that they helped to establish, and adapted a more stripped-down radio-friendly approach to their sound. Whether it was a step to ensure their survival amidst shifting musical trends, the next logical progression in the bands own evolution, or a shameless parallel to Dave Mustaine's former bandmates in Metallica, it was a change that ensured that Megadeth would remain one of the prominent names in heavy metal.

Changes aside, this is still instantly recognisable Megadeth, with Dave Mustaine's familiarly distinctive vocals, Marty Friedman's sleek and exotic guitar solos and the solid rhythm work of bassist David Ellefson and drummer Nick Menza. The compositions may have slowed down a notch in favour of more coherent songwriting and more traditional arrangements, but it still sounds like Megadeth through and through.

The only problem is that the songs themselves are not overly memorable.

Sure, there's some absolute Megadeth classics here, such as 'Skin o' My Teeth', 'Symphony of Destruction', 'Sweating Bullets' and 'Foreclosure of a Dream', and there's some underrated hidden gems such as 'Psychotron' and the title track, but there's also some fairly blatant filler material. Songs like 'High Speed Dirt', 'This Was My Life' and a few others do absolutely nothing for me.

'Countdown to Extinction' is regarded as a classic, and in fairness, despite my opinion of it, I won't argue the case. But for me, it's nothing more than a good album. It's got some Megadeth highlights, but its abundance of lacklustre material makes it tough for me to choose this over some of the bands other releases.

Seeing this fall under the Guardians clan on the MA site is an interesting take most certainly.  I think it retains enough thrash metal credentials to still please the regular Megadeth fan but I accept at the same time that there's a lot of straight up metal in here as well.  It most certainly is one of the clearest attempts by the group to be more accessible and commercially successful, with an overall sense that the aggression had been paired back and the edges of things polished more than we were used to.  This polish was clearly evident on Rust In Peace but it was more around being showy and technically proficient, not that these elements disappeared altogether on Countdown to Extinction but it is a marked step down in those stakes.

Retaining the services of both Menza on drums and Friedman on guitars was a positive step at least and offered some stability but I think we were all waiting for the next level of wizardry and complexity that we were shown on Rust In Peace (an album I will openly state to be overrated in my book) but instead we got a pretty plain old catalogue of riffs strung together through solid if not equally as plain structures, dusted with hooks galore though to hold the interest.

One of my favourite tracks on here is one of the least obvious ones in all honesty.  Foreclosure of a Dream isn't Mustaine and co. at their best but it is by far the most memorable beyond the usual suspects of Skin o' My Teeth, Symphony of Destruction and the title track.  It is also an album full of filler though unfortunately, with the final three tracks not really being necessary at all and are instantly forgettable.  I would also call out Sweating Bullets as being perhaps the worst track on the whole album.  It's off-kilter structure and almost "metal cabaret" delivery style are just a tad too bonkers even by Mustaine's standards.

I lost track of Megadeth after this record, not coming back around to them until 2009's Endgame which was a sort of combination of the bits of Rust In Peace that I liked coupled with the accessibility of Countdown to Extinction but also the overlong track listing to unfortunately.  What this album marks for me was the point in time I moved more towards Metallica and Slayer as my go to thrash bands, dropping this lighter Megadeth option.  I found Metallica's black album to be more thrashy than this and Slayer's Seasons in the Abyss to hold more menace despite both of these albums being the start of the more accessible eras of those bands.  Megadeth by comparison just went a tad too far, whether this was to out do Mustaine's old band I don't know but it didn't work for me.

Megadeth once again follows in Metallica's slipstream with an album that's probably more entertaining, if nowhere near as successful.

This period was an extremely busy time for Megadeth and in particular frontman Dave Mustaine. Not only did their 1990 Rust in Peace album send their popularity soaring, with plaudits all through the metal scene, Mustaine also got married to Pamela Anne Casselberry in 1991, which was followed by the birth of his son Justis in February the next year. When you consider all of this additional responsibility was swiftly dumped upon Mustaine’s shoulders, it’s probably not surprising that dollar signs were starting to flash before his eyes. Metallica had just done the impossible and cracked the mainstream in a huge way, selling over twenty two million copies of their self titled album worldwide. It’s hard to blame Mustaine for wanting a piece of that very rich pie, and given the negative history between the two bands, there was added incentive to try to beat them at their own game. Victory was unlikely of course, but the only way for Megadeth to attempt it was to follow a similar pattern to Metallica, rid their sound of any remaining extremity, and produce an album of radio friendly tunes. If they could do so without alienating their existing fans altogether then even better. Could lightning really strike twice or would Megadeth’s commercial accessibility experiment end in disaster?

Countdown to Extinction took four months in Enterprise Studios to create. The main driving force behind the new direction was co-producer Max Norman, who pressed the band to generate shorter, less complicated and more easily digestible tracks than what had appeared on previous albums. The thrash heroics that made classics like Peace Sells... But Who's Buying? and Rust in Peace so exhilarating were removed and replaced with much more traditional verse/chorus/verse/chorus structures. The earliest hint for fans that a significant change had taken place was that Countdown to Extinction didn’t feature mascot Vic Rattlehead on the cover (he’d been the focus of all four albums to this point) when it was released on July the 6th 1992. It certainly didn’t deter them from rushing out to purchase it, with the album debuting at number 2 on the charts in the United States, but typically that was one place behind the number 1 position Metallica achieved a year earlier. It would eventually sell over two million copies and is still today the most successful Megadeth album from a sales point of view. There’s no doubt that the band achieved their financial and popularity goals, and the album would even be nominated for a Best Metal Performance Grammy in 1993.

Strangely enough, that’s not the only nomination Countdown to Extinction would receive, as the title track would pick up an unexpected honour when awarded the Doris Day Music Award by the Humane Society of the United States, for “spotlighting species destruction and the horrific sport of canned hunts”. This probably amused Mustaine greatly as it is rumoured he wrote the song as an attack on his old rival James Hetfield, who has a passion for hunting. Otherwise the lyrical content of Countdown to Extinction doesn’t stray too far from the political and military themes that were present on Rust in Peace. Symphony of Destruction, Architecture of Aggression and Ashes in Your Mouth all put a negative spin on war, while Captive Honour is about the prison system and Foreclosure of a Dream concerned with economic ideologies. All this serious content matter is juxtaposed by Sweating Bullets’ apparent piss-take on schizophrenia and Psychotron’s rampaging cyborg killing machine (apparently based on the Marvel comic character Deathlok) makes sure there’s still an element of fun to be had. Probably the only thing I haven’t actually talked about yet is whether Countdown to Extinction is any good. The answer to that question is yes, but Megadeth’s fifth album is certainly not a flawless affair.

Despite making drastic changes to their overall sound, the band didn’t manage to rid themselves of the inconsistency that mars pretty much all of their albums. There are without question some highly entertaining tracks to be found, with Symphony of Destruction, the title track and Psychotron in particular showing that Megadeth don’t need to play at high speed to produce the goods. Unfortunately, for every one of those high points there’s a low one that threatens to undo all the work. Mustaine is in reality a pretty ordinary singer, but he somehow found a workable style over the years that negated his significant inadequacies. The fact that Countdown to Extinction is more of a traditional heavy metal album than a thrash one, and consequently has additional reliance on vocal melodies, makes for some rather awkward sections, with the unfortunate Sweating Bullets and Captive Honour suffering the most. At the same time, it’s actually this willingness to break from the norm and have some fun that results in Megadeth’s mainstream-seeker being a more compelling listen than the comparatively clinical and sobering Metallica release it coat-tailed. Countdown to Extinction can’t compete with Megadeth’s best works, but it gave them the massive hit they were after without staining their legacy. Mission accomplished I guess.