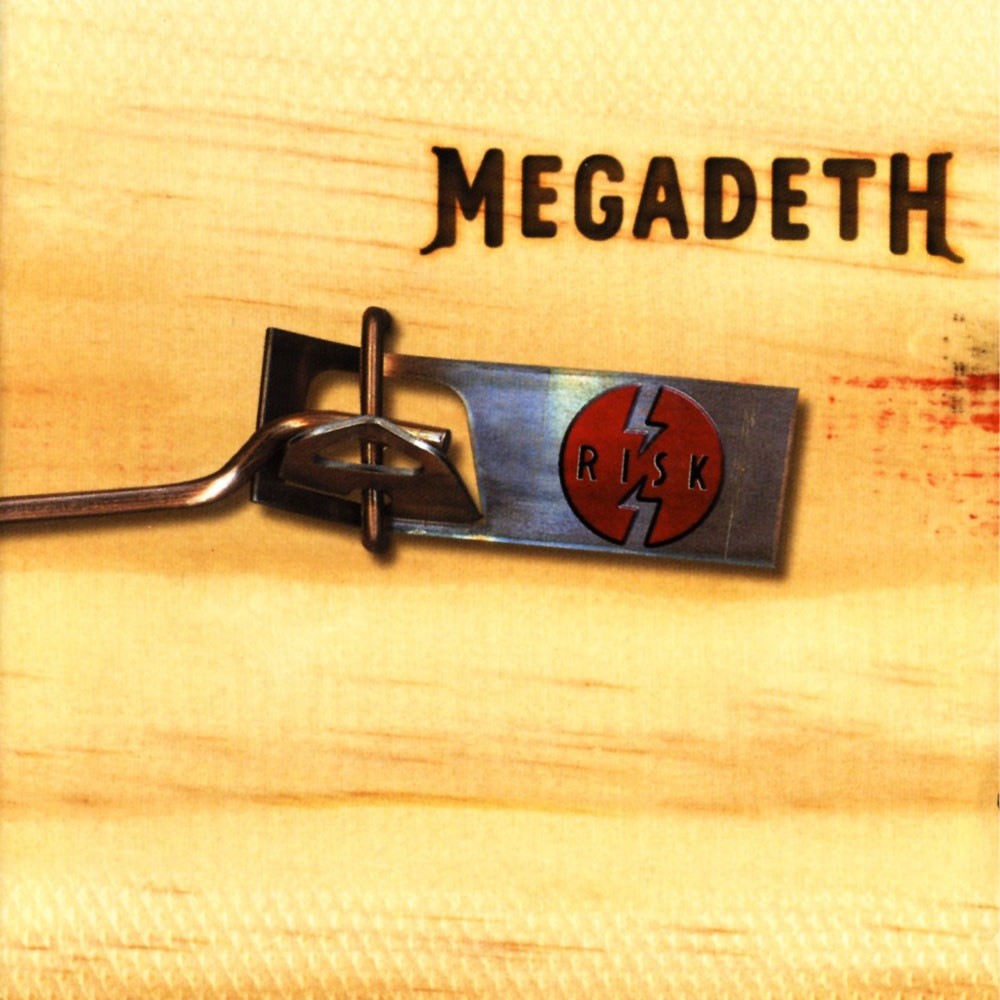 A blatant attempt to make loads of money, Risk was an inevitable kick in the pants for all involved.

Megadeth’s previous full-length studio album, Cryptic Writings, was really the first time that I thought the band had started to seriously slide. While many of their original fans had jumped ship about five years earlier, I persevered through the likes of Countdown to Extinction and Youthanasia, finding numerous catchy and enjoyable tunes on the way. Those diamonds in the rough were far harder to find on Cryptic Writings however, with a lot of the album pushing the simplistic commercial rock elements a bit too far, so I feared that Megadeth’s run of solidity had finally come to an end. Further cause for concern arose with the news that the highly successful line-up of Mustaine, Friedman, Ellefson and Menza had finally been broken. As is often the case with anything involving Mustaine, drummer Menza’s departure was anything but amicable. On tour in 1998, Menza discovered he had a tumour on his knee and was forced to undergo surgery. Jimmy DeGrasso, formerly of Suicidal Tendencies and Mustaine’s punk side project MD.45, temporarily replaced him, but somewhere along the line that replacement became more permanent. Menza has since stated that he received a phone call out of the blue while in hospital, informing him that he no longer had a place in the band, whereas Mustaine has suggested that Menza was let go because he lied about having cancer (his tumour was benign). Whatever the case, Menza was out, DeGrasso was in.

My fears after Cryptic Writings were that Mustaine, on his eternal quest for worldwide fame and riches beyond imagining, would take Megadeth further into a commercially successful instant gratification zone, leaving the complex and exhilarating likes of Peace Sells...But Who’s Buying and Rust in Peace so far behind that comparison would become next to impossible. In the end this only half turned out to be true. Risk did indeed attempt to tap into the masses, detaching itself from anything resembling metal while ramping up the sugary pop sensibilities, and yet it failed to produce anything particularly catchy or memorable. The result is an album that finally pissed off any remaining faithful fans, while simultaneously failing to grab the attention of a new wider audience. After the inevitable critical and commercial bashing that followed its release, Mustaine was very quick to point the finger at others, suggesting that it was the granting of more control to producer Dan Huff and guitarist Marty Friedman’s desire to create pop music that led to disaster. Personally, I think one statement made by Lars Ulrich went a long way to influencing the outcome after he suggested in an interview that Mustaine needed to take more risks if he was ever going to reach the level of success he desired. Well, here was that risk, with the album apparently titled as such in an attempted middle finger to Lars that backfired in the most comprehensive fashion.

So why is Risk so bad? For starters, it’s so blatant in its objective that you can’t help but be completely turned off. Rather than concentrating on writing excellent, memorable music and allowing their fans to choose favourites and concert sing-along moments, Megadeth produced the Enter the Arena and Crush ‘Em combo, which is so obviously trying to manufacture a response (annoyingly it succeeded with the song being played at sport stadiums around America). More disappointingly, for a band called Megadeth, Risk has absolutely no conviction or aggression whatsoever. Even ignoring the overly sappy, tambourine tapping shockers like I’ll be There, Ecstasy and Seven, tracks like Prince of Darkness, which despite having lyrics that are full of venom and negativity, come across as some sort of uncomfortable parody of all things metal. There are only a few sections on the album where Megadeth come close to producing the accessible catchiness they were obviously going for, with opener Insomnia, head-filler The Doctor is Calling and the southern tinged Wanderlust all being at least mildly successful, but there are way too many grimace-inducing tunes to grit your teeth through to experience them. I must wonder what would have happened to Megadeth had Risk been the global sensation they were hoping for. Just how long would the talented Mustaine and Friedman be able to nonchalantly strum their guitars and tap their feet to simplistic beats? I for one am grateful we never had to find out.

1997’s “Cryptic Writings” was a disappointing album for Megadeth. I’d happily followed them out of their thrash metal days & into their more poppy metal sound of the 90’s feeling safe in the knowledge that Dave & the boys would always dish up something of a consistently high quality but “Cryptic Writings” was the first album where I struggled to find much enjoyment. It wasn’t enough to indicate that the band’s glory days were completely over but it was definitely a concern. You got the feeling that the next record would be a very important one for Megadeth.

“Risk” was everything that I’d feared. The band had all but discarded their metal roots & taken on an even more commercial approach. I like to keep an open mind & judge an album for what it is rather than what it’s not but this proved quite a challenge for me here. "Risk" was such an obviously conscious attempt at commercial success that I was almost completely turned off before I’d even given the songs a chance to show me what they’ve got to offer. And I’m glad I managed to give “Risk” a few listens before making my judgement because some of it did improve on multiple listens. Certainly not enough to warrant return visits though.

Things get off to a horrible start as there is very little quality in the first five tracks but repeat listens showed some of the later material to possess a bit of the catchiness that appealed to me on albums like “Youthanasia”. “The Doctor Is Calling”, the very Bon Jovi-like “Wanderlust” & closer “Time : The End” are all pretty decent songs with plenty of hooks & memorable choruses. If the rest of the album was of this sort of quality then it’d be worth listening to. Unfortunately there are some complete shockers amongst the rest. “Ecstasy” (with Dave doing his best James Hetfield impression during the outro) & “Seven” are the worst offenders while “Insomnia”, “Breadline”, “Crush ‘Em” & “I’ll Be There” are all very ordinary too. There are so many poor attempts at writing a hit & the production schmaltz is in overdrive.

“Risk” has a few good moments but it’s also chock full of cringes & disappointment. I find it genuinely amazing that Dave agreed to let Megadeth stoop to the levels they’ve gone to here. After reading his thoughts on the whole process recently I find it hard to know what to think. “Risk” is certainly another step down from “Cryptic Writings” & it may be the low point of Megadeth’s career.