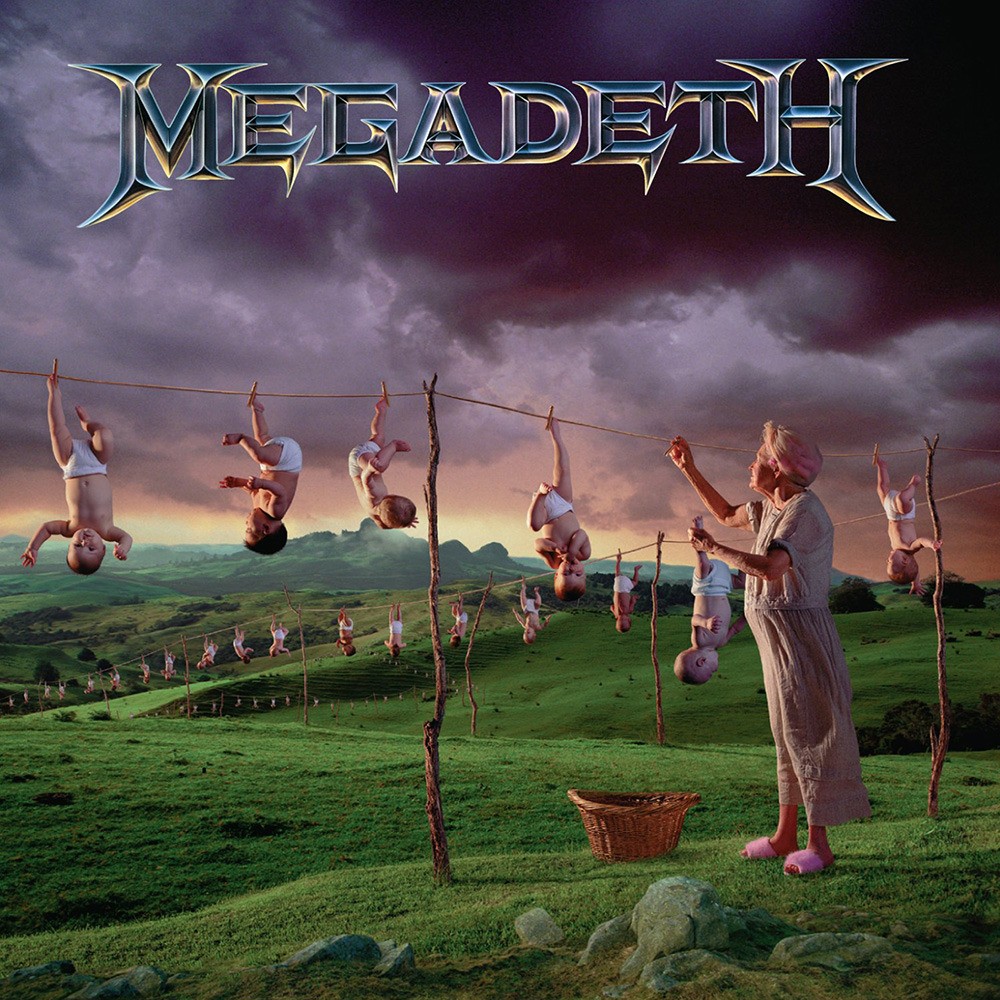 1992’s “Countdown To Extinction” is a record that I have mixed feelings about. On the one hand it signifies the end of Megadeth’s days as a thrash metal band. I’d been a fan of the band for around six years by that stage & the idea of Megadeth moving to a more song-writing focused traditional heavy metal sound was not an idea that I was terribly thrilled about. On the other hand it ended up being a pretty decent heavy metal album & it was hard to deny that I enjoyed it. Having said that I couldn’t say that I liked it as much as their previous three albums so there was still that hint of disappointment in the back of my mind. Subsequently when it came time for the release of their follow-up album two years later my interest had waned somewhat. I gave the record a couple of listens regardless & soon discovered that the band had progressed even further away from their thrash metal roots. This didn’t sit well with me so I didn’t really give it the time that it needed to open up.

Revisiting “Youthanasia” now has been a very different experience. I’ve matured a lot & have a much more diverse taste in music these days so I wanted to give it a proper chance to show me what it had to offer this time. To be fair it seems like a logical progression from “Countdown To Extinction”. The band shows a little more restraint & presents a clear focus on song-writing over energy & technicality. There’s a lot more space than Megadeth have ever shown before. The drumming is very basic & stripped back which was initially a struggle for me while I became acquainted with the songs. Dave Ellefson’s bass lines aren’t as prominent as they were in the past either. The song structures are much more traditional than their more progressive & adventurous thrash material & the riffs tend to take a back seat while the vocal hooks carry the spotlight. This is aided by a clean production job that presents the songs in a very accessible & palatable form. Marty Friedman seems to relish the new-found space & his solos are a definite highlight for me. The guy has such beautiful & exotic style that’s as memorable as it is technically flawless. I don’t think Dave Mustaine’s vocals suit this less intense metal sound as much as they did the thrashier stuff. He does sound a bit whiney at times but I can certainly deal with it when the song-writing is of this high a quality.

The album doesn’t really hit you the first time around but the hooks definitely start to sink in on repeat listens. There are some really anthemic choruses on there & I struggled to get them out of my head for days afterwards. The highlights aren’t as huge as those on Megadeth’s classic albums but there’s a consistency that they’ve struggled to achieve at times. There aren’t any real clangers here. In fact two thirds of the album is really very good. The other third is not horrible but it doesn’t quite get to where I’d like it to. “Blood Of Heroes” & “Black Curtains” are probably the weakest links but I’m not a huge fan of “Train Of Consquences” or “The Killing Road” either. Everything else is pretty entertaining really. Each song has an addictive singalong chorus without overdoing the cheese factor at any point. Strangely enough my favourite track ended up being the most commercial one which was quite a shock to me. “A tout le monde” is pretty much a power ballad but the chorus has an amazing hook that I struggled to shake. The gimmicky closing track “Victory” with its lyrics that include the song titles of loads of Megadeth’s old material was also a standout.

“Youthanasia” ended up being a very simple but surprisingly entertaining listen that deserves a lot more respect than I gave it back in the day. It’s not the most challenging or impressive Megadeth album but it makes up for that with some quality song-writing. I can see myself revisiting it on occasion.

Megadeth continue their quest for mass popularity at the expense of creativity, but the result is at least enjoyable and consistent.

There’s no doubt that Megadeth found the success they were looking for with 1992’s Countdown to Extinction release. Dropping the thrash metal and technicality and instead focusing on catchy, radio friendly tracks had increased the band’s popularity to new heights. The question was: just how far would these highly proficient metalheads be willing to simplify their sound before it completely alienated their original fans? You also had to wonder at what point any of the band members would feel that the sacrifice of creativity and experimentation just wasn’t worth the monetary gain. A quick listen to Megadeth’s sixth album Youthanasia would suggest that the guys had not yet reached these thresholds, but a look into the recording circumstances and the conflicts that occurred during it proves otherwise. Deciding to stick with producer Max Norman, the band entered Phase Four Studios in Phoenix in early 1994. This was short-lived however after problems with the studios equipment forced the band to relocate during the pre-production stage. Mustaine was determined to record the album in his home state and yet there were no other suitable alternatives available. Norman suggested they build their own in a rented warehouse, which is exactly what they did, later dubbing this makeshift studio Fat Planet in Hangar 18.

It was here that numerous conflicts occurred, with Mustaine’s controlling nature seemingly the cause of the majority over a challenging eight month period. His demands for a consistent and accessible record were simply at odds with other member’s urges for creativity, with the result being, as he puts it, “outrageous emotional interventions”. Mustaine even went as far as hiring noted fashion photographer Richard Avedon in an attempt to improve the band’s image, never hiding his fervour for mainstream popularity and financial success. As much as I generally disapprove of this creative restraint and money making focus, I have to admit that Youthanasia is indeed an accessibly pleasant album, and close to the bands most consistent effort overall. It’s not far from the approach found on Countdown to Extinction, but it’s even more streamlined, with far more focus on vocal melodies and catchy compositions. All twelve tracks range between three and five and a half minutes, and all adhere strictly to a verse and chorus focussed format, making them prime radio material. There are virtually none of the silly moments that tarnish a lot of Megadeth’s previous works, with a very serious and professional quality to the entire fifty minute running time. Probably the closest the album comes to letting its hair down is closer Victory, that cleverly mashes multitudes of well known Megadeth track titles together in a fun celebration of the band’s history.

Despite the consistently enjoyable nature of Youthanasia, there’s no doubt that this more efficient and controlled Megadeth lacks the punch of their earlier material. The first couple of listens in particular are very underwhelming, and even when the hooks dig under your skin (which they inevitably will), there’s something just a bit safe and methodical about the whole experience. The musicianship always takes a backseat to the overall “songs”, meaning you’ll be inadvertently humming along to the tunes throughout the day without really being able to recall the individual instrumentation. Even the album highlights such as Reckoning Day, Addicted to Chaos and I Thought I Knew it All rarely leave third gear and have almost irrelevant verses leading to their admittedly high quality choruses. The title track’s lead is really the only section I can recall on the album that demands attention from a musicianship point of view, but it merely reminds me of how exhilarating these guys can be when uninhibited. In the end I consider Youthanasia to be a solid and entertaining album that just doesn’t do enough to rate even close to the bands thrashier, more adventurous outings. Then again, if you’re a fan of the less extreme side of metal, there’s some very nice songwriting here that could very well be to your liking.