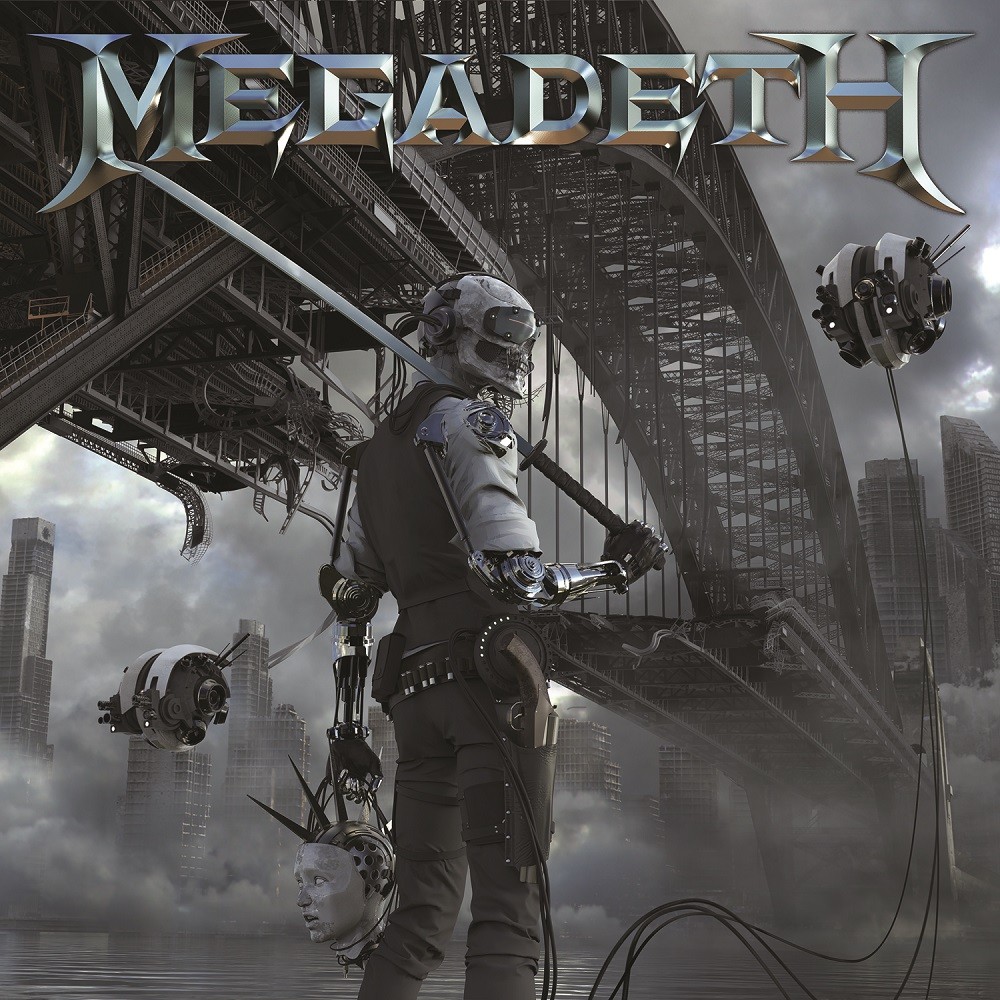 In three decades of line up changes, drug abuse, fallouts and increasing political awareness Megadeth have always still remained for me on the fringes of my thrash metal tastes. After the first 3 albums which I enjoyed immensely, I was totally bemused then (and still am now) by the worship for "Rust In Peace" in 1990. "Countdown To Extinction" fared better in these ears but still that was my last Megadeth album purchase. Nothing happened release wise for me until I stumbled across "Endgame" in 2009 which I actually thoroughly enjoyed, with its showy guitar antics and solid song structures it kept me entertained.

It's fair to say that Megadeth are a different band to the duo that first came together back in 83, however "Dystopia" instantly captures something that was lacking in the bands two previous releases. Energy. Four tracks in and the racing plod of "Death From Within" will have you thinking that you are listening to a Testament record because this album has a dark energy in it, a heaviness not always present with Megadeth releases of old. Mustaine's vocals are definitive and identifiable still but somehow are different (whether this is entirely down to the production or his age is a point for debate however). The comparison to latter Chuck Billy performances isn't a million miles away as a reference point at least.

Prevalent throughout are the excellent lead exchanges (the work on "Bullet to the Brain" being of particular note) which are tempered superbly by that familiar solid riff work, rigid in structure and firm in delivery. You can't help but listen to "Post American World" without thinking it is 1985 and Mustaine and co are just chopping away like the young thrash maniacs they were back then, it is moments like this that Anthrax should sit up and take note of. Far from the predictable and at times dull "For All Kings", Megadeth have released a very solid thrash metal album here.

There's a life to each track on "Dystopia". Taken as a whole the album has a clear influence of old school thrash yet has a spectrum of melody and variety coupled with clever orchestration and superb musicianship. Loureiro is superb and sounds like he's been duelling with Mustaine for all 33 years of the bands existence and Adler supports the whole structure perfectly with Ellefson dispatching his bass duties with assured calmness throughout.

"Dystopia" is charged. It is explosive, searing and heavy to boot. There is a real sense of a return to form most definitely. Listen to instrumental "Conquer or Die" and hear that choppy riff rumbling along to the bass perfectly whilst Mustaine and Loureiro scorch blistering leads everywhere effortlessly. Even the cover of hardcore heroes Fear's "Foreign Policy" is carried off with enough aplomb to work a treat!

I started listening to "Dystopia" very much of the opinion that I wasn't going to like it. Maybe influenced by peer pressure or the poor effort from Anthrax from earlier the same year, I had pretty much decided that Megadeth's best days were well and truly behind them. It is nice to be proved wrong sometimes though and also nice to see veterans of the metal genre be able to pop up and drop an amazing record in today's market that pound for pound matches almost anything else I have heard from bands a lot younger and fresher than Megadeth.

I can't sign off without mentioning the artwork. It is not my cup of tea at all, CGI concocted nonsense for nonsense's sake to me but thank Satan that what lies beneath is light years better than the packaging suggests.