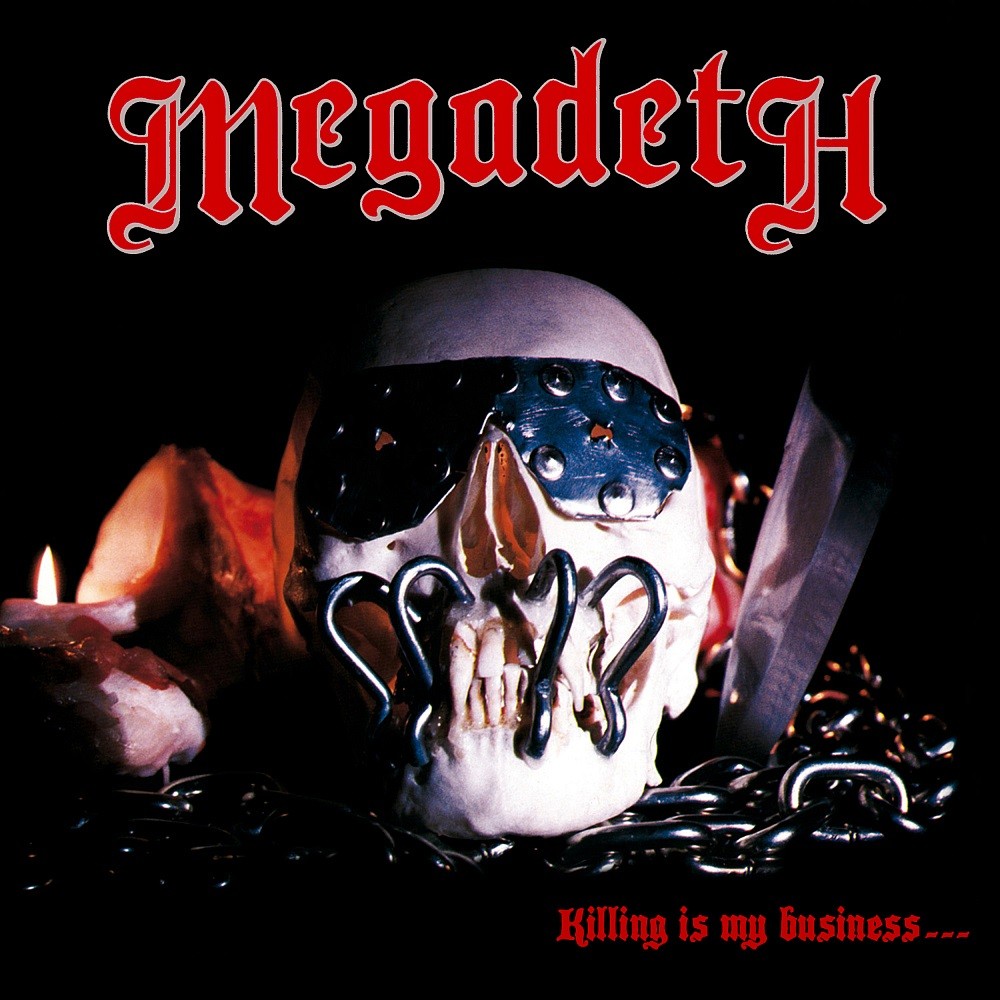 Surely every heavy metal fan knows the story of Dave Mustaine being kicked out of Metallica and forming Megadeth? Right? No? Ok, I'll wait here while you quickly look it up.

With Megadeth, Mustaine had one goal, and that was to create something faster, heavier and more extreme than his former band. It's arguable, but I'd say he succeeded. 'Killing is My Business' certainly has a raw, ruthless energy to it, and whilst it oozes bloodthirsty hatred towards Hetfield and Ulrich, it sadly comes at the expense of the actual compositions.

Sure, the riffs are fast, the vocals are full of spite and bitterness, and the songs rage with angst and rebellion, but to be honest, it quickly becomes very repetitive. The horribly tacky and rushed production makes most of the riffs indistinguishable, and the guitar solos sound like nothing more than an annoying, high-pitched flail of notes. And I'm fairly sure a five-year-old could come up with more interesting vocal melodies than this.

There's only really one or two memorable moments on this album. 'Last Rites – Loved To Deth' is probably the only song I'd consider passable, whilst all the others have the odd riff here or there, but there really is nothing that can truly save this debut. Then there’s ‘Mechanix’, the infamous song that Mustaine introduces as; “There’s their version, and there’s OUR version”. Sentimentality aside, Metallica's version (titled 'The Four Horsemen') is simply better in every way.

Megadeth are a fantastic band, and this is really the only record of theirs I don’t like. I've got to believe that if this was the debut from any generic thrash metal band in the 80's, they probably never would have made it to the 90's. Thankfully for Mustaine, he was a member of the genres biggest band and had garnered himself a cult following that gave him the opportunity to progress past this album. And to be fair, most metalheads in the 80's loved it regardless. 'Cause they'd buy anything anyway.

I originally got into Megadeth in my early teens back in 1988. "Peace Sells... But Who's Buying?" & "So Far, So Good... So What!" were my entry points & I quickly became a big fan. I ventured back to the debut album a short time later & although I liked what I heard I never gave it as much time as I did the next 3 or 4 albums. Listening back now it's immediately obvious that the band had enormous talent. The technical proficiency of the band was exceptional when compared with most thrash metal debuts of the time. David Ellefson's bass performance is excellent, Gar Samuelson's jazzy drumming is quite interesting & Chris Poland's guitar solos are both flashy & memorable. Dave Mustaine's riffing features a more distinct NWOBHM influence than on subsequent releases but there's also a raw thrash metal intensity that is quite exciting. Dave's vocals were a little more untamed than the ones we would later become used to as well & I quite like them.

Where "Killing Is My Business.. & Business Is Good!" falls down is certainly in the production department. The band blew half of their production budget on booze & drugs & the end result reflects that pretty obviously. The guitar sound is particularly thin & quite a bit softer than I would like. This really does minimize the impact that the album is capable of having & some of these songs really deserve better.

The quality of the song-writing is good but a little inconsistent. The band's signature tune "Rattlehead" is the clear highlight & is probably the only track that manages to transcend the production problems to be regarded as a truly great thrash metal song. "Skull Beneath The Skin" is pretty close to the mark as well while "Last Rites/Loved to Death", "Killing Is My Business... And Business Is Good!" & "Looking Down the Cross" are all solid & effective. The inconsistencies I mentioned come in the form of Nancy Sinatra cover version "These Boots", the rockier NWOBHM-influenced "Chosen Ones" & the fairly pointless rehash of "Mechanix". "Chosen Ones" is probably the weakest link in my opinion as it doesn't maintain the intensity of the rest of the album. To be honest "These Boots" is kinda fun but I would much rather have enjoyed some more serious Megadeth original material. "Mechanix" is an obvious attempt to out-Metallica Metallica & although the track is not horrible it fails to match "The Four Horsemen" in terms of weight & class.

"Killing Is My Business... And Business Is Good!" is an essential album for all Megadeth fans although it isn't the classic release that some would have you believe. It marks a solid start for the band & shows signs of greatness but is let down by poor production & inconsistencies in quality.