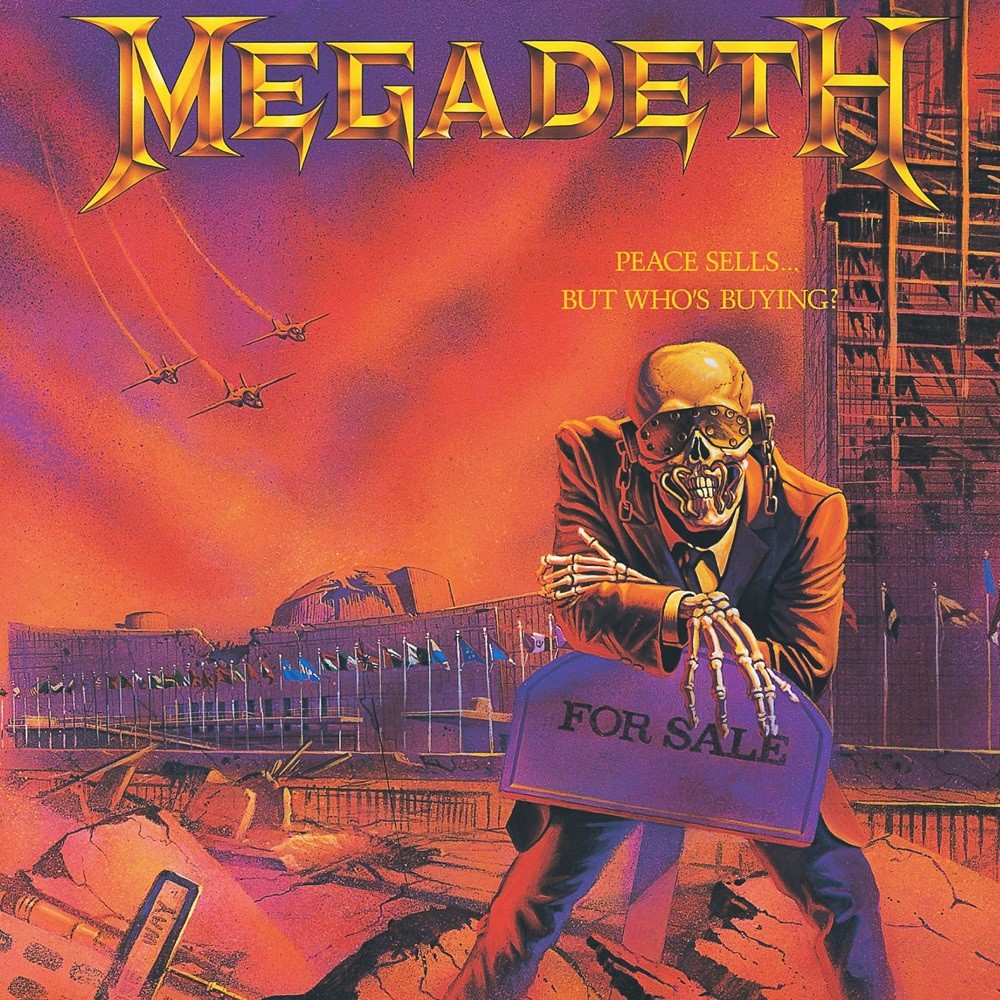 I've got a lot of time for Dave Mustaine. He is a seriously cynical bastard and I see him as a bit of a kindred spirit in that respect. Forming Megadeth after inevitably getting kicked out of Metallica (can you seriously see Dave taking shit from Lars for long, because I can't), he went on to release three or four of my all-time favourite thrash albums. Although almost everyone cites Rust in Peace as the classic Megadeth album (and a damn fine one it is too), this and it's follow-up, So Far, So Good... have a lot more meaning for me, coming out as it did while I was navigating a divorce at the tender age of 24 and, feeding into my somewhat jaded view of life, Dave's sneering cynicism really chimed with me, particularly on Wake Up Dead and Peace Sells - "If there's a new way, I'll be the first in line, but it better work this time" - too fuckin' right, Dave!

Most of the rest of the tracks' lyrics are based around the prevalent pulp-horror themes of 1980s straight-to-video movies, although the lyrics are of secondary consideration to how neck-wrenching the thrashing is. It's not all-out war like Slayer and it's not as compositionally accomplished as Metallica at around the same time (Master of Puppets), but almost every track is a classic to my ears (except the inevitable cover and even that's one of their better ones) and I will never, ever tire of this record.

A huge step up from the debut, Peace Sells is a defining album for one of thrash metal's legends.

I wasn’t particularly impressed with Killing is My Business…and Business is Good! Megadeth’s debut had some nice thrashing moments, but was too inconsistent and immature to be labelled an essential album. Band leader Dave Mustaine seemed too intent on bettering Metallica to succeed in forming an identity for his own band and fell short in that original pursuit anyway. Despite having numerous line-up changes prior to their first album being recorded, and guitarist Chris Poland’s temporary exodus on tour with Exciter, Megadeth managed to hold the same arrangement in place long enough to enter the studio to record a follow-up in late 1985. Unfortunately, things wouldn’t go completely to plan, as the small recording budget offered by Combat Records resulted in a less than satisfactory end result. Frustrated with the lack of funds, Megadeth jumped ship and signed on to Capitol records who subsequently bought the rights to the new album off Combat and set about remixing the recordings. In November 1986, Peace Sells...But Who’s Buying? was finally released over a year after the band first started recording it. All the extra effort was no doubt worth it as Peace Sells is a classic thrash metal album that really kick-started the band’s commercial and critical success.

From the very first minutes of Wake Up Dead, it’s apparent that this is a very different beast to the debut. In what has to be one the best starts to a thrash metal album in history, Megadeth combined humour, several superb mosh-worthy riffs and numerous kickass leads before the listener has had time to pick their jaw off the floor. Any production issues and awkwardness that blemished Killing is My Business are forgotten immediately and Megadeth have successfully left their poor man’s Metallica phase well and truly behind them. This is the most fun you can have listening to music and while I don’t have an issue with metal bands taking themselves too seriously (I take metal seriously too!), it’s refreshing to hear a band clearly having fun and making sure the listener does too, without sacrificing quality. Surprisingly given that the line-up is unchanged and the small amount of time between albums, the musicianship on show here is far superior to their previous effort. While Gar Samuelson (drums) and David Ellefson (bass) get the job done more than adequately, Chris and Dave’s guitar work is absolutely stellar throughout. Solos seem to be a dying art these days and its hard to understand why when you listen to Megadeth’s best work. Dave’s vocals also improved dramatically as he found a style that compliments his unique and limited range.

Along with the apparent huge step up in musicianship and production, the band really nailed their audience thematically. As much as the metal youth had lapped up all the pro Satanic imagery (Slayer) and philosophy of death / suicide (Metallica) related lyrics, they found it far easier to relate to a guy trying to sneak into his own house after cheating on his wife so he doesn’t Wake Up Dead. For the rest of the album the subject matter swings between a tongue in cheek social commentary and B grade horror / science fiction elements. Both would become customary ingredients of the Megadeth blueprint and even be seamlessly combined on Rust in Peace with government cover-ups of alien visitations. Interestingly, the Satan in Megadeth’s work appears to be the villain as opposed to an entity worthy of praise, as is the cliché of extreme metal. The Conjuring seems to be describing some sort of ritual with the end result being Satan claiming the soul of some poor bastard that’s made a deal with the devil. Bad Omen seems to portray a group of people worshipping Satan in the hope he will give them his blessing, only for demons to rape and destroy them before Satan takes their souls. The modern Dave Mustaine claims to be a born again Christian but it seems to me that his fear of God could be detected right from this early stage.

The majority of Peace Sells...But Who’s Buying? is damn entertaining thrash metal, although I have to say that Devil’s Island isn’t quite as impressive and I Ain’t Superstitious continues the dubious selection of covers that Megadeth marred all of their first three albums with. Wake Up Dead, The Conjuring, Good Mourning/Black Friday, Bad Omen and My Last Words are all Megadeth classics that put this album high on any all time thrash metal list. Even the overly accessible title track with its chugging riffs and playful leads is undeniably enjoyable, not to mention how much it helped the band reach a whole new audience with the video getting airtime on MTV. Of course I can’t finish without mentioning that cover. After the last minute botch together (after the real artwork was lost) that adorned Killing is My Business, the band needed someone to not only produce a great cover, but also give character to Megadeth’s chosen mascot Rattlehead. Edward J. Repka was the man who came up with the goods, not only forming the basis of so much of the bands future identity, but also completely encompassing the tone and theme of the album by suggesting that peace itself had become a commodity. It’s just the cherry on the cake for one of the many great albums to come out of the golden era of thrash metal.

Surely I'm not the only one who disliked Megadeth's debut 'Killing is My Business', right? I mean, I didn't just dislike it, I hated it. I thought it was awful. It was boring, uninspiring, repetitive, grating, and just all-out rubbish.

That's why I'm happy that with 'Peace Sells... But Who's Buying?', Dave Mustaine and his band of merry musicians become the Megadeth we all truly know and love today. And that includes me!

Everything I hated about 'Killing...' has been rectified here. The songs are catchier and the guitar work has matured a great deal, the vocals have improved massively, in both lyrics and melodies, and the production finally gives the music some clarity, as opposed to their debut album where I felt the shoddy production made it hard to truly distinguish any of the guitar riffs.

Now, let's not get ahead of ourselves. This album is far from perfect, and for all the improvements it's made over its predecessor, there are still some fairly average songs that I don't find myself ever coming back to. However, there are also some early Megadeth classics in there that still hold up well today, such as 'Wake Up Dead' and 'Peace Sells'. And tracks like 'Devil's Island', 'Good Morning/Black Friday' and 'My Last Words' show a band who, despite the vast amounts of drugs and alcohol they were consuming, still had the wherewithal to produce something that would be considered one of thrash metals finest works.

Oh, and it happens to have one of the most recognizable album covers in metal! Not bad. Not bad at all.

As a huge fan of Thrash Metal, Megadeth strangely never hit the marks I love in this kind of music. To their – mostly Dave’s – credit, the songwriting and solos are great, and the riffs are not far behind. However, where the band always lost me is in their delivery and atmosphere. Dave’s not a good vocalist, but that’s not what bothers me, as raspy shouting is something I enjoy. The problem is that not only does he struggle to create any sort of memorable hooks or verses, but he also writes some bad lyrics. The delivery on most songs is sarcastic, sometimes angry but all too often it just sounds like he’s yelling for the sake of yelling without any conviction or thought behind the words.

The music actually matches this – while as I said, the musicianship is really good, there’s really no atmosphere or emotion being conveyed. There are great moments like the openings to Good Mourning and Bad Omen, both having a more ominous and serious atmosphere. However, most of the time it just sounds like the band is jamming out to earn their dollar, which is not something I want in Thrash. It’s not dark, and the anger present is only very surface-level “I hate paying my taxes” kind of anger.

To be clear - It is a great album. The music is well-written and expertly played, the production is about as good as 80’s metal gets, and there aren’t any actually bad songs, but I find it massively overrated, and rather empty compared to most contemporary releases in the genre.