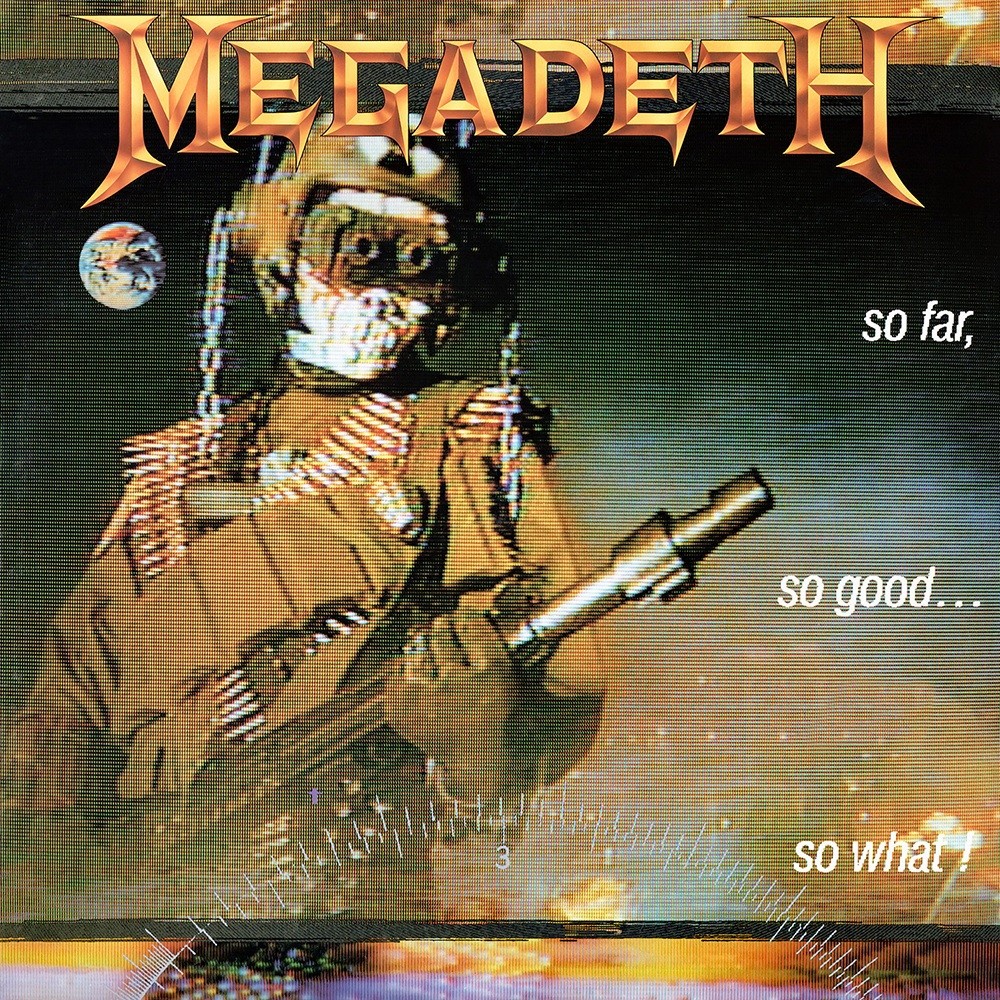 Young, brash, and pumped full of drugs, 1988's 'So Far, So Good... So What!' saw Megadeth continue along the path they'd started upon with 1986's 'Peace Sells... But Who's Buying?". While it originally seemed like the band had cleaned up their act and become more driven and focused, the reality was that a bigger album budget just meant more money to spend on drugs and alcohol.

Unfortunately, 'So Far, So Good...' doesn't quite live up to the standards set by its predecessor. The production is arguably weaker and the writing has clearly taken a backseat to drug-taking, as, while there's a few hits here that belong on any Megadeth compilation release, the overall quality of the songs is definitely a step down than previously.

As before, the music is fast and intense, accompanying lyrics riddled with hatred and spite. Thrash metal was in full swing in 1988 and this album goes to show why Megadeth were one of the top bands of their time. Dave Mustaine's vocals are seething with bitterness and sincerity, though lack the polish that they had on 'Peace Sells'. But his signature "snarl" is in full effect, and gives the music the rawness it needs.

One notable significance of this release is that we see the first of many (and I mean many) major line-up changes. With guitarist Jeff Young and drummer Chuck Behler replacing Chris Poland and Gar Samuelson respectively. Both would be ejected from the band soon enough, with neither man having any particular impact.

While songs like 'In My Darkest Hour', 'Hook in Mouth', 'Set the World Afire' and a cover of the Sex Pistols classic 'Anarchy in the U.K.' prevent this album from being a complete loss, as a whole it just seems like a pretty passable release, especially when compared to the bulk of the bands later releases.

Album number three for Megadeth was always going to be a challenge after the success of their sophomore.  "Peace Sells..." was a solid (if not a tad overrated) affair that cemented Mustaine's band firmly in the genre.  To open up your next release with a racing instrumental piece is a big call but they do manage to pull it off as 'Into The Lungs of Hell' immediately peaks the interest.  The big build up to 'Set The World Afire' continues this big feel to the opening of the record, however once the track starts proper it soon falters and feels like it is getting weaker, barely making midway through before the dip occurs to my ears.

Quite why 'Anarchy In The U.K.' made it onto the track listing remains one of my long standing strokey beard moments.  I actually saw it on the rear of the album for the first time and thought it would suit Mustaine's style of vocals perfectly and it kind of does but although I acknowledge they are essentially key to Megadeth's sound, I don't actually rate Dave's vocals all that highly.  The relevance of them on this cover is that they are the strongest part of the track.  To say I prefer the original version tells you how much I rate the rest of the band's contribution here (I hate the Sex Pistols).  Dave attests to listening to a lot of punk rock at the time of making this record so it does all make some sense.

'Mary Jane' again offers a strong build and injects a variety into the structure stakes along the way.  Thankfully, the strong start continues into the full length of the track as it rages and rants its way through four minutes plus of prime Megadeth.  '502' doesn't start well, I find it confusing and bashy, but it does settle down soon enough into a sufficiently angry little number to start the second half of the album.

Although I get the sentiment behind 'In My Darkest Hour' it just feels like it could have been so much more.  Structurally it is all there, I just can't get over my dislike for Mustaine's vocal delivery.  The rabid and meandering lead work fits the subject matter perfectly but somehow the whole song still falls short.  'Liar' is another classic, mocking and sneering Megadeth track with its sonics, chopping riffs and rumbling bass line.  This is the stuff that Dave's vocals were made for, give me 8 tracks of this and I am a happy fucker.

If not obvious from my review thus far, I find "So Far, So Good...So What!" frustrating because it is just so inconsistent.  'Hook in Mouth' just about sees to it that the record finishes on much higher a note than it started with (proper).  The reason it gets 3 stars is because although it fumbles it a bit, the record never drops the ball and still makes the end zone with it's head held high.

The version of the CD that I have includes unreleased bonus tracks because the band wanted to try and share the power that was present on this record so Paul Lani's mixes of 'Into the Lungs of Hell', 'Set the World Afire', 'Mary Jane' and 'In My Darkest Hour' make this version of the release up to 12 tracks.  They do sound fuller and less restrained than their final cut incarnations but they only really would have impact if they had made the final cut in this mix.  I just end up with a real sense of "look at what you could have won!" with these bonus tracks.

I’ve often seen people refer to “So Far, So Good… So What!” as the weakest of the four albums from Megadeth’s classic thrash metal period but I disagree with that statement. Perhaps I have some sentimental attachment to it as it was both my introduction to the band as well as an important album in awakening me to the joys of extreme metal. Regardless it’s been many years since my last revisit so I feel I have a fresh perspective & am in a better position to make judgements on it now.

Let’s get it straight out in the open that (much like Megadeth’s debut album “Killing Is My Business… & Business Is Good!”) the production leaves a bit to be desired. The rhythm guitar sound is quite thin, messy & often washed out by effects while the overall layering of the instrumentation generally sounds like the producer had little idea of how a thrash band should be presented. It certainly doesn’t ruin the record for me but there’s not much doubt that this album would have benefited from a more suitable production job.

Musically “So Far, So Good… So What!” saw Megadeth continue down the path that they’d been so successful with on “Peace Sells… But Who’s Buying?” two years earlier but there’s some further experimentation with more progressive sounds & structures. This was definitely not a band that sounded like everyone else in the scene at the time & it was clear that Dave Mustaine had plenty of ambition with regard to experimentation (especially in the way of song structures). The band had recently replaced their lead guitarist & drummer due to drug problems & to be fair Jeff Young & Chuck Behler did a reasonable job here although I can’t say they are on the same level as the talented Chris Poland & Gar Samuelson. Even though Dave has copped a fair bit of flack for his vocal performances over the years I can honestly say that I really enjoy his efforts on the 80’s records & this one is no different. He sounds genuinely spiteful & aggressive & it really suits both the music & lyrics. As usual the guitar solos are a highlight & show off the bands talent for producing memorable leads that find a nice compromise between melody & technique.

There’s always been something that’s bugged me about Megadeth. Even during their classic period I’ve always found that each album included a couple of tracks that were noticeably weaker than the rest. It’s for that reason that I’ve never awarded a Megadeth album the full five out of five rating & “So Far, So Good… So What!” is a prime example of what I’m talking about. None of the material is awful but a few of the tracks contribute to a lack of consistency. To be fair the cover version of the Sex Pistols’ “Anarchy In The UK” is not a terrible interpretation but it certainly disrupts the flow of the album & sounds very basic in comparison to the far more ambitious original material around it. “Liar” & “502” are also a little flat & lack the sophistication of the bands better songs in my opinion. Luckily those three tracks are all fairly short & the rest of the material included is seriously top notch thrash metal which more than compensates for those inadequacies. Instrumental opener “Into The Lungs Of Hell”, the adventurous “Mary Jane” & epic live favourite “In My Darkest Hour” really show off the class that Megadeth possessed at that time but my personal favourites are “Set The World Afire” & “Hook In Mouth” which best showcase Dave’s aggressive riff mastery & hateful vocal delivery. It says a lot that this stuff still gets me going 26 years later.

All flaws considered I still really get into this record. My feelings are very similar to how I feel about “Killing Is My Business… & Business Is Good!” however there are more highlights on this one. The weaker moments aren’t quite as poor & the production is not as bad either so I definitely favour it over the debut. Having said that it doesn’t come close to matching Megadeth’s best efforts as “Peace Sells… But Who’s Buying?” & “Rust In Peace” are another step up from here.