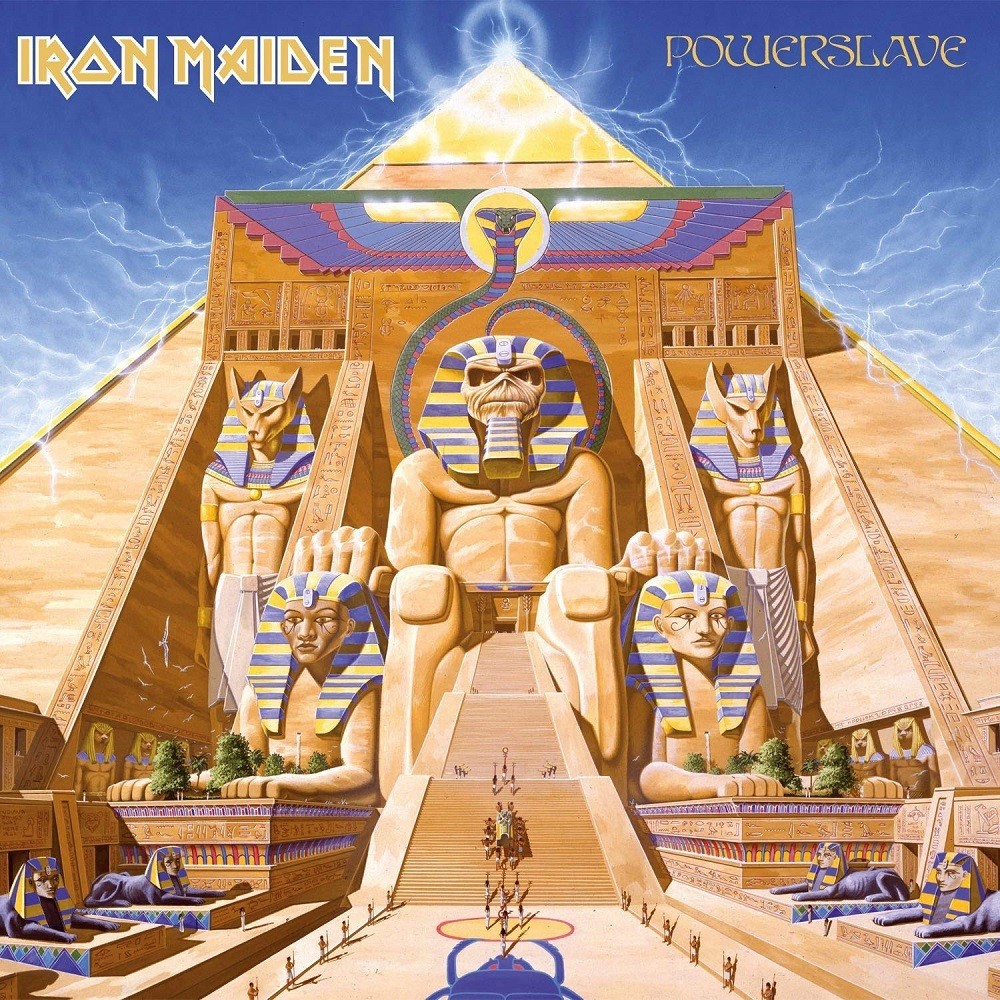 The only band whose first six albums I have listened to more than Iron Maiden is Black Sabbath and then only just, so that probably tells you exactly how much I enjoy this album already. Although Maiden had dabbled in the epic previously, Hallowed Be Thy Name for example, this is the album where Maiden became E.P.I.C.

Kicking off with the tribute to the few in number but ridiculously brave RAF pilots of The Battle of Britain, Aces High, Powerslave shifts immediately into top gear and fair hurtles along, the track's pace encapsulating the velocity and dynamism of the dogfighting Spitfires in their dance of death with the Luftwaffe aces as they join in battle above England's south coast. Following this with the album's first big single release, 2 Minutes to Midnight, Maiden are truly revealed as a heavy metal band operating at the height of their powers, from the scintillating twin leads of Smith and Murray to the soaring vocals of the "Air Raid Siren" sounding better than he ever did either before or since. Following the galloping instrumental Losfer Words (Big 'Orra) come a couple of my favourite less-lauded Maiden tracks, Flash of the Blade and The Duellists, both of which are terrific, but Flash of the Blade especially is an awesome slice of hi-octane heavy metal. Back in the Village is another speed-driven number which is very much in the vein of the opener Aces High and in truth tends to get a bit ovelooked due to it's proximity to the album's towering epics.

And so to the main event: Powerslave and the thirteen-minute Rime of the Ancient Mariner pretty much defined epic heavy metal in the early eighties and perfectly illustrate just how supremely confident Maiden had become at this point. Powerslave's tale of a death bed Egyptian pharoah finally having to face his own mortality is as suitably bombastic and towering as the subject matter would dictate. Fittingly for a track about an all-powerful monarch, Powerslave sound absolutely imperious. The main riff has a glorious Middle Eastern vibe and Steve Harris' bass sounds better than ever before, particularly during the solos of the second half of the track. Now this would be epic enough for most metal bands at this point in the genre's development but Maiden then up the ante even higher. Rime of the Ancient Mariner takes heavy metal and marries it with prog rock sensibilities in a way pretty much unheard of in 1984. Harris and co at this point were riding on such a wave I think they believed that now was the time to do exactly what they really wanted to do as they had accumulated enough kudos to take the fans along with them and a thirteen minute progressive track based on classical literature, although on paper a tough sell (we were only half a decade on from the punks burning prog rock to the ground remember) launched them even further into the stratospere. What can you really say about Rime of the Ancient Mariner? This is an incredible track and one of metal's great narrative experiences. If you want to point at one particular song and say when were Maiden at their peak then this track would be my answer and it may even be the single most awesome heavy metal track ever committed to wax.

I have a fair number of albums that I have rated as five-star releases, but this is mainly based on my enjoyment of them rather than the fact I consider them perfect. Powerslave is one of only a fistful of albums I would give that accolade to (Paranoid, Reign in Blood and Watching FromA Distance being the others). Despite this it still isn't my favourite Maiden album as I have a deeper and more personal connection to the Paul Di'Anno-fronted Killers, but that's just me and Powerslave deserves all the plaudits it has ever received several times over.

The greatest pure Heavy Metal record of it's time. While Thrash, Speed, Doom and Black Metal were taking the genre into more extreme - and dare I say interesting - directions, Iron Maiden were sticking with the tried and true and perfecting it. Here, Maiden mix the fantastic guitar work and hooks they’ve always had with a slightly speedier and more progressive sound, and it works magically. Every song on here is great, but the bookends and title track are truly special. Bruce’s voice has always been fantastic, but he sounds better than ever here, and that’s not just his range – the notes he hits to harmonize with the music are really unique here, and he’s pulling off magnificent vocal lines while still changing things up every so often to keep your brain entertained. It really is a Heavy Metal masterpiece.

Despite Iron Maiden's (absolutely earned) legendary status, I find their albums can actually be a bit mixed. Not really in style, which is always wonderfully consistent, and rarely do they produce outright stinkers, but for every absolute banger of a track there's another that's just "okay". Some songs that are decent pieces of Maiden's craft, but will get skipped over more often than not. All this is why Powerslave has always stood tall among Maiden's early albums for me, because it suffers from this problem the least.

When it comes to quality Maiden, there's plenty to choose from here. "Aces High" opens the album up with the sort of mind-melting guitar work that hauls you off into whatever world the band choose to explore. It magnificently keeps up the energy while still allowing for some variety as it goes, aided by some of Dickenson's most passionate delivery (and that's saying something). This, "Back in the Village" and "Flash of the Blade" are all just so full of energy, using furious riff assaults with bass and percussion driven gallops to make it feel like a heavy metal Irish jig in how they pull you into the wild ride.

"2 Minutes to Midnight" isn't quite so rapid-fire, but its infectious rhythm and lyrical acrobatics make it insanely catchy. "Two! Minutes! To miiidniiiiight!" is an irresistible battle cry. The title track perfectly conveys the desperate hunger for immortality, even the riffs carrying across that feeling of dark need and ultimate failure. "I'm a god, why can't I live on?"

In "Rime of the Ancient Mariner", Maiden took their formula to a new level entirely with this truly epic 13 minute beast of a song, almost twice as long as anything they'd put out up to then. And it even forgoes a prolonged intro, just diving right in! Harris' bass is succulent here, a real driving force. Part way in we cut into the quiet, gently strumming yet ominous section. You can feel the tension with the sounds of the creaking ship and the whispered narration. There's the ship, now ghostly and empty, adrift with only the mariner himself and his curse. Much like they did on the equally awesome "Hallowed be Thy Name", Maiden really tell a story here, their music acting as a perfect frame for it. It really gets across the conviction of the band, how they really care about telling these tales.

The only weak points on here really are "The Duellists" and "Losfer Words (Big 'Orra)". "Duellits" is okay, but just sort of pushes forward for 6 minutes without particularly interesting hooks, lyrics or techniques. "Losfer Words" is a serviceable instrumental, but doesn't stand out as such: you can hear the space where Dickinson's vocals would be, so it comes across as just another track but minus vocals, rather than it sounding like a distinct beast of its own. It doesn't help that these two songs sound so similar right off the bat either.

Maiden truly capture the spirit of heavy metal itself, shedding the remains of the hard rock side to the genre in its early days, and helping define what it was really all about, the vibrancy and energy in contrast to the darker side of Black Sabbath. The genuine skill and enthusiasm of everyone present allows them to take the listener off to new worlds or time periods with ease, and Powerslave encapsulates that deftly. Number of the Beast had a bunch of their all-time hits, and Seventh Son would go on to show more development in their writing, but when I think of classic Iron Maiden, I think Powerslave.

Maiden finally hit their true pace from ‘Piece Of Mind’ onwards.  At the point of me first hearing ‘Powerslave’ it struck me just how it sounded like a band who were five albums into their career should sound.  All the structures that had been improving since the debut continued to evolve on ‘Powerslave’ culminating in the epic ‘Rime of the Ancient Mariner’ of course.  For the most part though the majority of the songs are concise and memorable with only the aforementioned album closer taking on any grand length.

The sense of epic really came to the fore on ‘Powerslave’, the artwork coupled with the lyrical content added a real sense of poise to the Maiden offerings of the mid-eighties.  Not to say that the immediacy of their sound was gone.  Far from it. The way the opening the track drills into your brain, convincing the listener that they are sat in the cockpit of one of the very fighter planes being described.  The grit of ‘2 Minutes to Midnight’ and the dashing riffage of ‘Flash of the Blade’ and ‘Back in the Village’ bring a real sense of consistency and cohesion to the album.

It still isn’t perfect of course.  ‘Losfer Words’ and ‘The Duellists’ are the odd ones out here, with neither track bringing anything to the album.   But overall ‘Powerslave’ is probably the first time since the debut into the sophomore of there being some actual consistency from album to album.