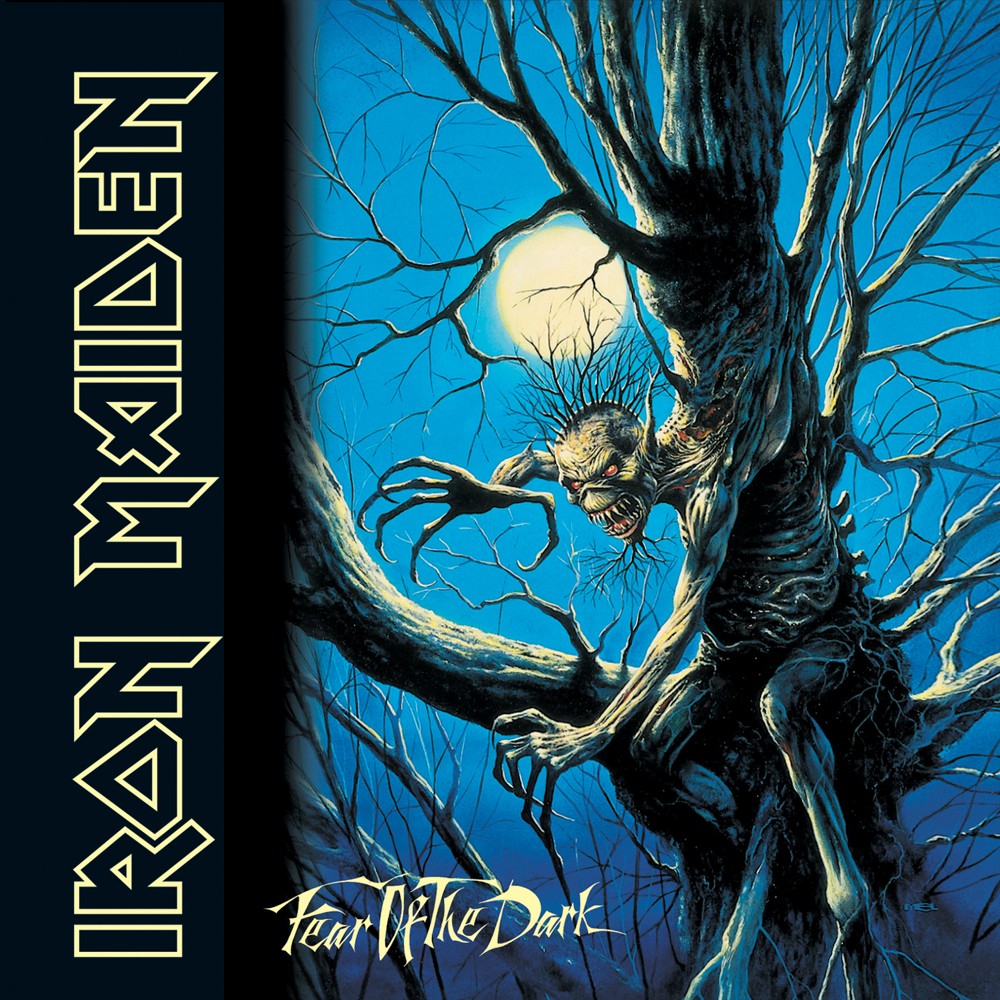 After an incredibly unblemished run throughout the entirety of the 1980’s Iron Maiden opened the 90’s with their underrated “No Prayer For The Dying” album. While it certainly had its moments it didn’t compare favourably with the bands triumphant back catalogue. It was an inconsistent effort that featured almost as many disappointments as it did highlights but luckily it was saved by the high quality of the first half of the album. I have to admit that even though I recognized its obvious faults I also found a fair bit of enjoyment in it so 1992’s “Fear Of The Dark” release interested me quite a bit. I was hoping for an album that was free of the sort of simple commercially driven pop metal songs that popped up in the second half of its predecessor & concentrated on the more serious & epic material with which Iron Maiden had made their name.

The album opens with the a pretty decent triple play in “Be Quick Or Be Dead”, “From Here To Eternity” & “Afraid To Shoot Stranger” but things really start to get going in the middle section with “Childhood’s End” & “Wasting Love” being the album highlights in my opinion. These songs possess all of the epic atmosphere that you expect from classic Maiden without being short-changed in the heaviness department. Strangely there’s a drastic dip in quality from that point with only the brilliant title track offering any real meat. As on “No Prayer For The Dying” the weaker songs tend to be the more simple & rocky sounding tracks that are focused in a more commercial direction than I would like to hear on an Iron Maiden record. The four track sequence from “Chains Of Misery” to “Weekend Warrior” is a prime example of this. Even though the choruses undoubtedly possess some decent hooks these songs simply lack a bit of integrity & it makes for a disjointed listening experience where my pleasure factor is jumping from opposite ends of the scale. There are also some moments that sound a bit rushed & pieced together (see “The Fugitive”). They don’t quite flow as well as I’d like. Luckily the best material is good enough to carry the weaker stuff & at the conclusion of the epic title track I’m left with a mildly positive feeling even though I’m not quite convinced.

Unfortunately “Fear Of The Dark” is a very similar story to “No Prayer For The Dying”. There are some genuinely great tracks but as a whole it’s far from essential. I don’t think the production does the songs too many favours with the relatively thin guitar sound being overpowered by Steve Harris’ bass much of the time but that’s not really the issue here. It’s more a question of quality control. It seems to me like a missed opportunity as Iron Maiden clearly still had the talent to write the sort of classic material that their fanbase craved but they seemed to lack the direction & focus necessary to produce it consistently. Contrary to popular opinion I probably prefer the previous album slightly over this one but there’s not much in it. If you combined the best tracks from both albums you’d have a brilliant record. As they stand they’re both enjoyable but inessential parts of the Iron Maiden back catalogue.