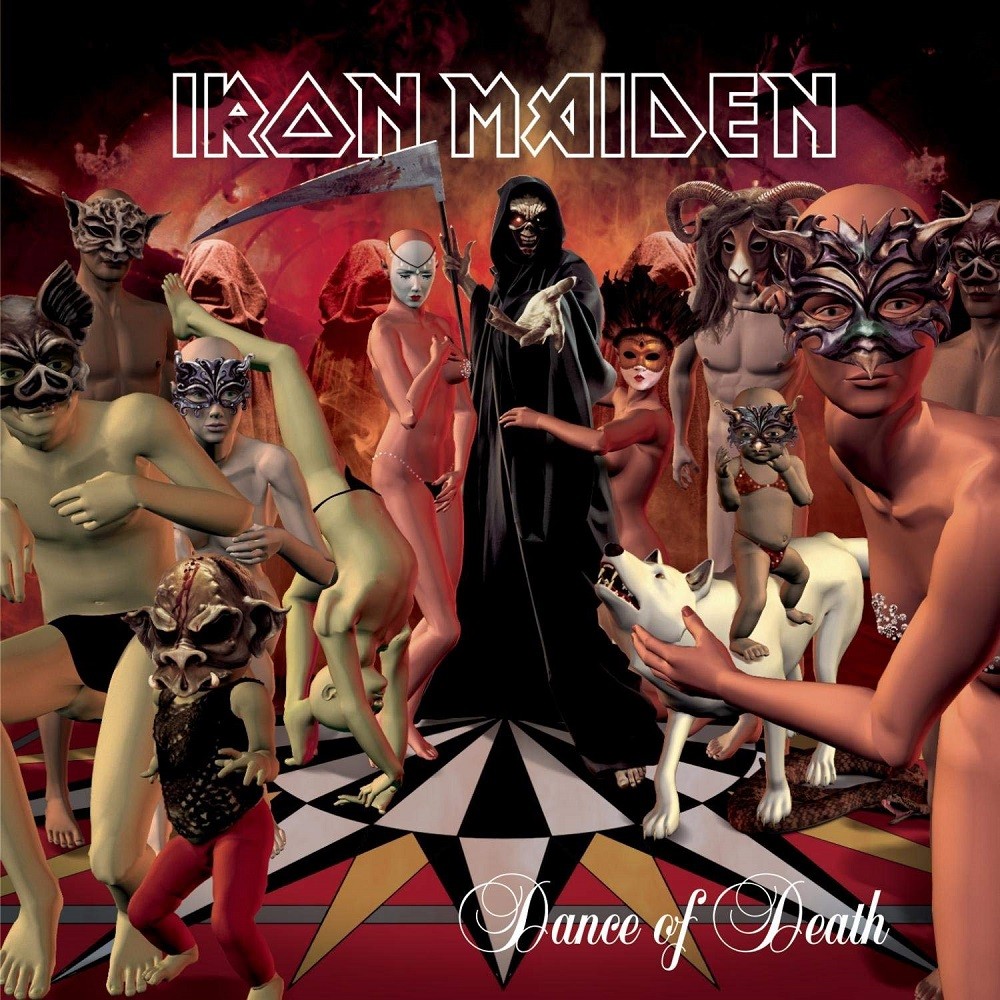 Bruce Dickinson & Adrian Smith’s return to the fold spurred Iron Maiden on to a comeback album of surprisingly high quality in 2000’s “Brave New World”. It certainly wasn’t a match for Maiden’s classic 80’s material (as some people would have you believe) but it was well above what could reasonably be expected after the Blaze-era had laid the band’s reputation to waste. It was a very consistent record that possessed all of elements of a great Maiden album but it didn’t quite have the highlights to put it up with the greats of their back catalogue. Regardless, I felt that it offered more than enough quality to indicate that Iron Maiden could still be a force to be reckoned with. Subsequently my hopes for the 2003’s followup album “Dance Of Death” were reasonably high. At the very least I was expecting to hear some epic anthems & some memorable singalong choruses.

When I first saw the album cover for “Dance Of Death” I was overcome by confusion. It looks extremely cheap to me & I was mystified as to how anyone could believe it was worthy of sitting alongside the great covers of Maiden’s past. But there it was & it wasn’t going to go away so I decided not to let it impact my listening experience. The other thing that was immediately obvious to me was the poor production. Maiden didn’t exactly have a great record with their recent production jobs but this one was particularly poor. The guitar sound was very muddy. It’s not enough to completely ruin my listening experience but it certainly doesn’t help. Stylistically things don’t seem far removed from your average Maiden album but I’m not sure the fans are after any sort of reinvention at this stage in their career anyway.

While there aren’t any complete shockers on “Dance Of Death” the song-writing is still pretty patchy. Songs like “Wildest Dreams” & “Montsegur” are a long way from the standard I expect from Iron Maiden & others just come across as a bit flat. There are a few songs that show quite a bit of promise only to be let down by a poor chorus (see “Journeyman”) or some cheesy folk sections (see “Dance Of Death”). Bruce Dickinson’s vocal performance is also a bit up & down. You can definitely hear the strain when he tries to hit high notes on a few tracks but then you’ll hear a chorus like the one on album highlight “Gates Of Tomorrow” & it’s clear that he still has the ability to take things where not many others can. This is a truly great Iron Maiden track; the only one on the album in my opinion. “Rainmaker” & “Age Of Innocence” are very enjoyable tracks too but they don’t quite make it to the levels of the great Maiden tracks of old.

“Dance Of Death” is not a horrible album. It doesn’t scream of its inadequacies. But at the same time its faults can’t be easily ignored. The dodgy production doesn’t help things much but even with a great one I doubt I’d find much replay value in it. It doesn’t have the consistency or the quality of “Brave New World” & I’d hoped for much better.