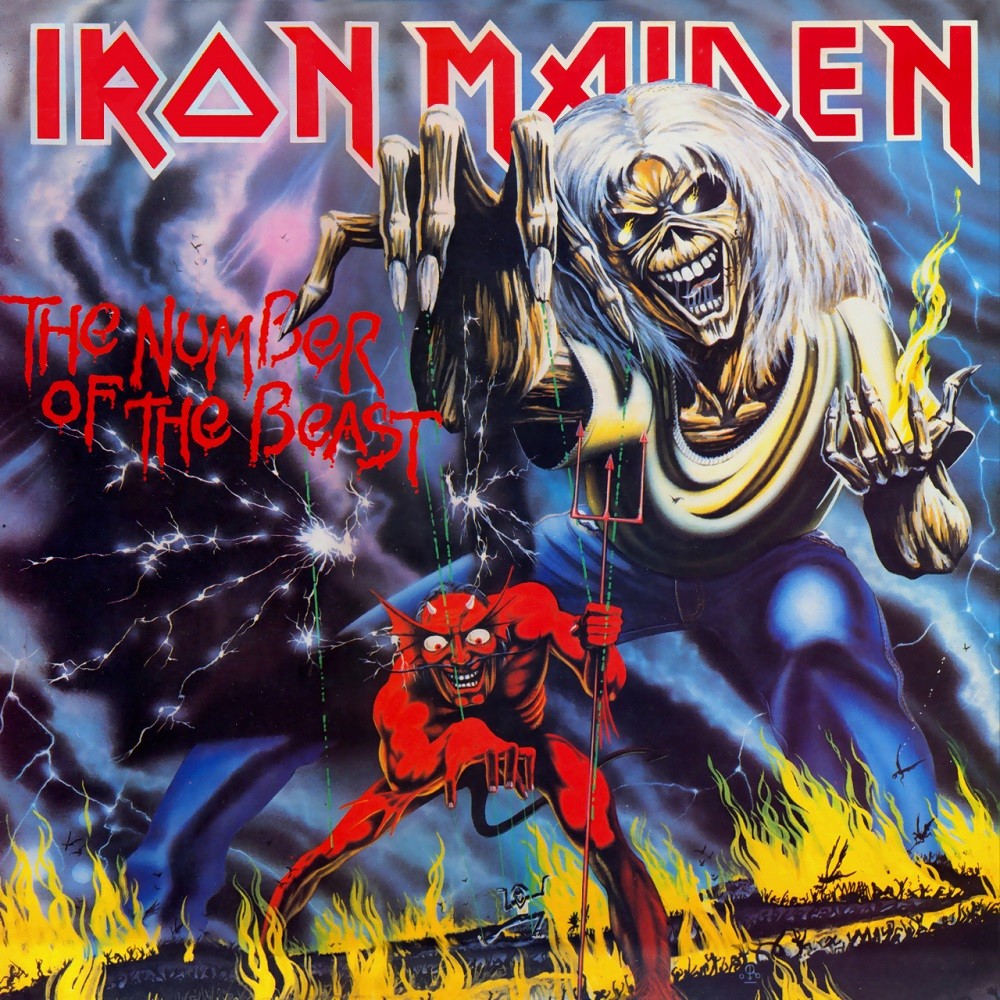 'The Number of the Beast' is the album that gave birth to the Iron Maiden we all know and love today. Besides a number of memorable hits that have remained a staple in live sets, it's most notable for featuring the debut of Bruce Dickinson, a man who would go on to become one of the most beloved and recognizable singers in metal.

Musically and sonically, this isn't much different than Iron Maiden's previous two albums. Rough and gritty 80's new wave of British heavy metal, the only remarkable differences, besides the addition of a superior vocalist, is the slightly stronger compositions. Most notable being two of their biggest hits (which still hold that title today), 'The Number of the Beast' and 'Run to the Hills'.

Of course, there's also other Maiden classics such as 'Hallowed Be Thy Name', 'The Prisoner' and 'Children of the Damned', which have all stood the test of time and are still as refreshing today as they were in 1982.

The playing is good for its time. Steve Harris is an absolute beast on the bass. Dave Murray and Adrian Smith are both competent guitarists, who've yet to utilize their full potential, especially when it comes to the duel harmonies they'd use on future releases, but they play more than enough to give all the songs the small embellishments required.

'The Number of the Beast' kicked off a long run of releases that would usher in the bands "golden era", and while it has its significance in Iron Maiden's history, I don't really consider it anything more than a decent album. It's good, but the best is most definitely yet to come.

Honest question before we start this review proper: besides the self titled debut record from Black Sabbath (or Paranoid, it's a toss up really), has their ever been a more influential heavy metal record than this one? I'm not talking about the best albums in the genre; the ones that have the largest audience and have reached the most ears. It's really difficult to imagine what heavy metal might sound like today if bands like Iron Maiden never existed, or at the very least, never created The Number of The Beast.

And it is absolutely deserving of all of the attention it has received throughout time, critical acclaim and now me gushing over it, even if I still think that at this point in their careers, Iron Maiden hadn't even begun to scratch the surface of their potential.

And how can I not start by talking about the production and the importance of bass. Steve Harris is one of heavy metal's most underrated and most important bass players. The amount of space that he is given throughout this album is remarkable. His sound is clear and pronounced throughout the album on tracks like "The Prisoner", "The Number of the Beast", and "Gangland". His foundations are superb and is rewarded with some amazing bass solos during the bridge on "The Number of the Beast" or just extended fills before the choruses on "Run to the Hills". When he isn't soloing, Harris is not confined to a basic root note pattern that is being duplicated by the rhythm guitar.

And those guitars sound crisp and precise on tracks like "The Prisoner" and "Hallowed Be Thy Name". Meanwhile, Bruce Dickinson is one of heavy metal's most iconic voices and the way that he howls the melodies to these tunes is fantastic. In time, Dickinson will learn how to sing with composure, but on this album, the loose nature of his timbre fit in surprisingly well in front of the very clean mix of the instrumentals.

As for the songwriting itself, I could go on for days talking about The Number of the Beast. "Run to the Hills" only rivals "Master of Puppets" as heavy metals most iconic choruses. The title track modulates from a quieter odd time signature introduction into a common time thrasher and the transitions between the two is pulled off to near perfection. Even the solos are mixed well. "The Prisoner" does this as well with just enough unique qualities to make it standout from the other. "Children of the Damned" is the album's first great banger, and the album ends with pure melodic bliss with "Hallowed Be Thy Name".

"Invaders" has some decent moments with its wonderfully crafted verse sections, but that chorus is... something. It's a jarring transition that stands out for sure, but not in the way that Iron Maiden was probably intending. It's also the opening track so it can leave a bad taste in your mouth if your not expecting it. I also didn't really mind "Gangland"; I don't see why most people almost universally consider this as the albums lowest point when "Invaders" is still here and the opening track no less.

In terms of criticism, there is very little. One of the greatest parts about the community surrounding heavy metal is that the very best of the best gets propped to the top while underwhelming music is nearly universally shunned. And The Number of the Beast is completely deserving of the title of "heavy metal's most influential album". I know people who don't necessarily listen to heavy metal, but they know Master of Puppets and they know The Number of the Beast. This community is alright in my book.

To start on a negative note, ‘Invaders’ just might be one of the worst album openers of all time.  Couple this track with ‘Gangland’ and you have two of my least favourite Maiden tracks all on one album.  Despite being a generally inconsistent affair and its poor start ‘The Number of the Beast’ manages 3 stars because when the tracks are on point they are crackers.

The obvious anthem on here is ‘Run to the Hills’, which although I have heard more times than I have my own name be called still has some positive impact after all these years.  But for me the real gems on here are the tracks that rarely get spoken about.  ‘Children of the Damned’ retains that threatening and menacing edge from the writing of the first two albums and is actually complimented really well by Dickinson’s vocals.  Similarly, album closer ‘Hallowed be Thy Name’ builds into a layered and solid structure, exploiting Dickinson’s range well.  The storytelling theme of previous records continues on the third effort to.  ‘22 Acacia Avenue’ expands on the tale of Charlotte the Harlot and continues that anthemic memorability to the structure.

Sadly, when the album dips, it dips badly.  This makes for an inconsistent and sporadic release, like the bad arrangement of the first album that I spoke of the in my review of it only this time the quality of the songwriting doesn’t rescue the likes of ‘The Prisoner’ and the aforementioned ‘Invaders’ and ‘Gangland”.

Given this album follows my all time favourite Maiden release there was always a risk of me feeling underwhelmed and that unfortunately is the case here.