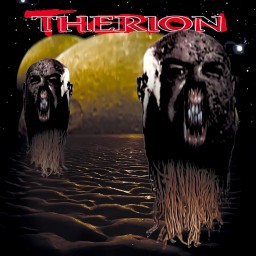 Oh, god, I didn't see that cover on first listening to this album. Most pictures of it online show the accursed thing considerably darker than it really is, so it doesn't look like...that. And by that I mean someone severed two people's heads while they were in the middle of just the most horrendous dump possible. Done in 20th century photoshop. I know its supposed to be Lovecraftian, but that is not an appealing cover.
A'arab Zaraq Lucid Dreaming is a sort of compilation album, consisting of a bunch of varied songs, some new, some rerecorded, and something unusual. The two new songs start the album off, and they are very nice. Sort of dark, quasi-symphonic, but mostly just some catchy metal. I like electric keyboard sound here, somewhere between one that accurately emulates the instrument and one that produces a very obviously midi sound.
Then we get a bunch of covers. Four of them. Of these, I can only make a fair comparison to the original in Under Jolly Roger, an excellent song as it was originally done. Here, boring, plodding. Which is basically what all four of the covers sound like. Because the original of Under Jolly Roger was exciting, FIRE THE CANNONS! HOIST THE SAILS! PAINT THEIR DECKS RED WITH BLOOD AND TAKE THEIR PRECIOUS TREASURE UN-DER JOLLY ROGER! Here, eh, fire the cannons, under Jolly Roger.
The album finishes with the soundtrack to some short film known for having music written by the guy from Therion. There are a few rerecorded tracks from Therion proper, but we get the entire soundtrack as just done by Johnsson. Apparently it might as well have been a Therion music video. Its very nice stuff, but leans more towards a fantasy RPG OST than what Therion is known for. And that makes me sad because there isn't a game with a soundtrack written by Therion.
Between the new original tracks and the soundtrack, its a nice album, but there's nothing much here for people who aren't Therion fans. 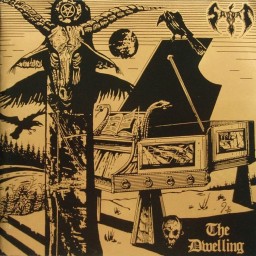 Sabbat is a weird band for me. I as a rule am generally a sucker for anything Japanese, give me two titles which seem relatively close in quality and I will gravitate more towards the Japanese one any time. Even if they're both crap I'll give the Japanese one a chance. Its not so much true these days, but its something I've generally done. So its all the more curious I never really gave Sabbat a chance. Its possible I never gave it a chance owing to my high fondness of the other Sabbat, whom I love the first two albums of very much, but I also enjoyed the American Gargoyle, even though the Japanese one is very near and dear to my heart. Well, its a feature release, let's give it a shot!
The Dwelling is an unusual release, since the very Venom-infused style Sabbat is known for and a hour long song are not exactly a match made in heaven. The Dwelling going to an extreme here, the song isn't even broken up into individual parts on the CD listing, even though it quite clearly has different sections to it. This sounds like a minor complaint, but even ye olde prog rock and classical albums separate the different sections, and often times those are very well hidden. This is not well-hidden, this is obviously shifting.
You can basically divide the album up into two different kinds of sections, the standard, presumably typical Sabbat sound. The vocalist screaming gibberish over an aggressive, but surprisingly atypical of the kind of music its inspired by. The harshness of the sound is less because it was mixed to be as evil as possible, and more because the high notes on the guitar are entering the shrill section. When the guitar isn't hitting that section it is quite pleasant. Curiously, during these sections there's someone singing in the background in a slightly high-pitched, but not quite King Diamond way.
What the lyrics are said to be and what the lyrics come out as seem to be two entirely different things.
Stated lyrics: "Infernal harmony of the Evilist is released..."
What the lyrics sound like: "Infernal harmony of the blehblehblehbleh!"
And basically quite a lot of "blebleblehbleh". Growling, singing fast in a foreign language I suspect the vocalist doesn't quite understand, I'm shocked anything is coherant.
The other section is a quite different kind of sound, a very melodic, more pleasant sort of prog interlude. Unfortunately, these guys are not quite talented enough musicians to pull that off. (I could play one particular section here on a guitar myself, without having much idea of how to play a guitar, because they're the sounds a guitar make when no strings are pressed) Its quite nice, but a bit repetitive. Shades of Gargoyle in some sections, I wonder if there was any inspiration there. To further the sense of inferiority, there's the sense at times that they don't even know where they want to go with the song, and while it does have a satisfactory conclusion, one wonders when we're going to get there.
Its a good album, but I'm not entirely certain who the album was intended to appeal to. The two different sections don't entirely work together and appeal to two different groups of people, who aren't going to like the other section very much. 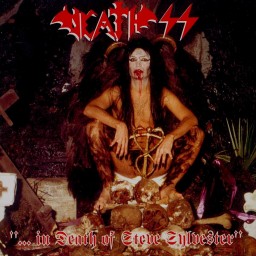 Once upon a time, I used to really like Death SS, or at least the Black Mass/Heavy Demons era. Its not even really something I consciously stopped liking, I just starting listening to other things. And even when I listened to the band I didn't listen to this, their debut, often. Now, if you don't know, Death SS is an Italian band who are at least in theory, named after the lead singer's stage name. Pictured on the album cover, naked, looking like the kind of dude who makes ten thousand black metal albums in his basement. (I may regret joining this website based on the high quality album art alone, see Type O Negative) They share the image, but are instead a very theatrical doom metal band.
The obvious sticking point for any would-be listener are the vocals. Sylvester has a sort of nasally style that sounds somewhere between a demon and an alien, its unique and not necessarily bad, but it is as unlistenable at first. Later on he would prove capable of singing normally, but here even his normal voice sounds off-putting. Good luck deciphering the lyrics without the use of the lyrical sheet. Not that you need to understand much, he's usually singing about how he's a horror monster and how much he's going to kill you. Less satanic and more Tales from the Crypt...or one of the numerous Italian horror comics that I assume exist.
The music itself is fairly generic. There's just nothing much to it beyond the very theatrical arrangements. There is a great deal of meandering, like they aren't quite sure where they want to go with the song. The theatrical flourishes switch between being nice and going on for a bit too long. Its not really something that sticks with you. Its a concept in dire need of refinement. You can even detect the evolution I mention in the demos included with some versions of the album, which remove the theatrical pomp and just feel boring.
My favorite parts of the album are on those bonus tracks too. There are two covers from British prog rock band Black Widow, In Ancient Days and Come to the Sabbat. The difference is night and day. Sylvester actually knows how to sing here and the theatrical touches are on songs that are already well-made. The gradually building up chorus on Come to the Sabbat was practically made for the band. Its the sort of thing that makes one wish that was the direction Death SS went in.
All in all, entertaining, but more memorable as a feeling than anything concrete.