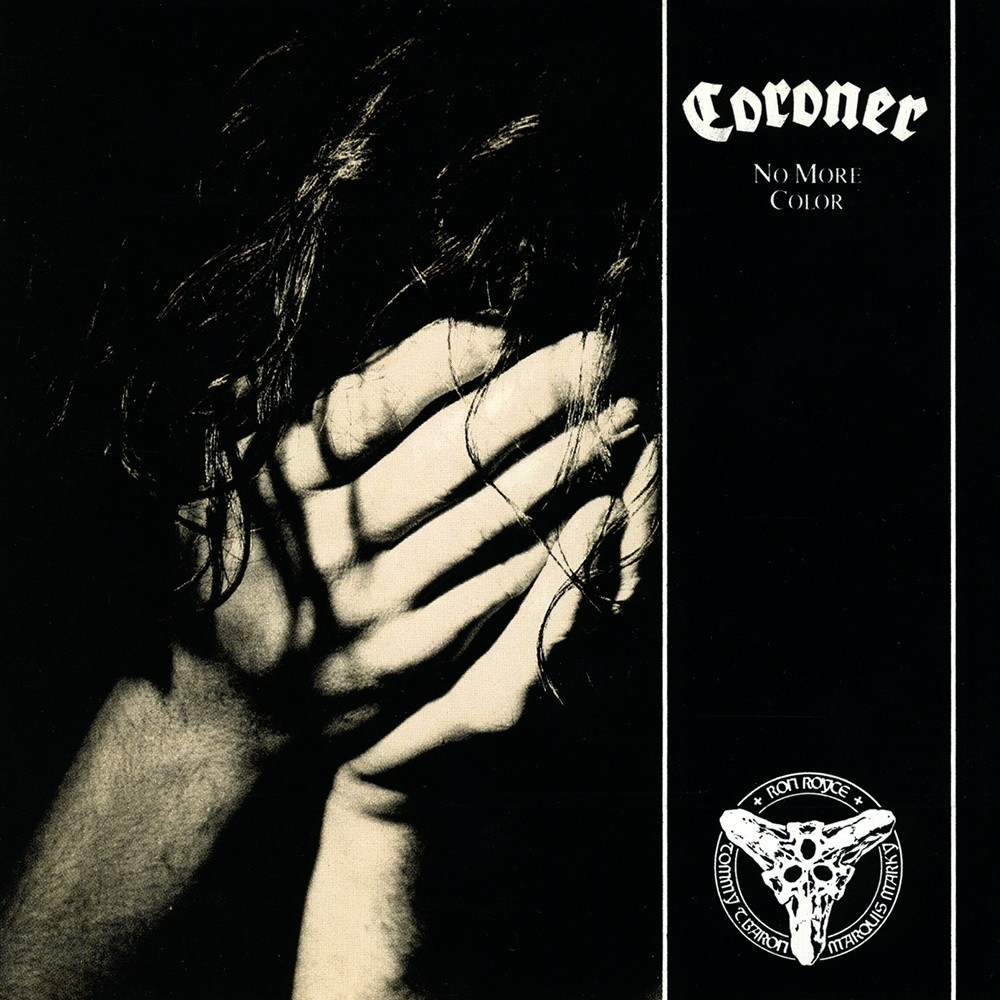 More solid thrashing goodness from these Swiss legends. There's a step up in quality from their already great previous albums on No More Color. I've always enjoyed the formula these guys have. While this formula is simple at times, the musicianship certainly isn't. Ron's Tom Warrior like croon fits perfectly over these catchy, yet technically awesome tracks. Once again, it's Tommy Baron's guitar that stands out for me. His rhythm and lead work on here are stunning, while never crossing over into wanky showmanship.

Die By My Hand, Read My Scars and Last Entertainment are some of the finest tracks on this release, but the whole album is consistently enjoyable. Coroner always have been an extremely underrated band and No More Color is one of the highlights of their career. I'm not sure it's my favourite, but it's right up there!

Oh. My. Greatness! This is close to the top of the Coroner mountain for me. Oh all these d*mn monstrous riffs! I personally think this is almost as great as the now perfect Mental Vortex, and possibly Punishment for Decadence which I haven't listened to yet. So why do I think No More Color is so f***ing great!? One word: diversity! That's what makes this album a better part of the band, when they begin to mix speed/thrash metal with elements of avant-garde/progressive metal, without having too much of those two kinds. The mid-transition albums are the ones that works best for me. Riffs and screams equalized with experimentation!

The opener "Die By My Hand" has buff riffs in the verses that scream pure progressive thrash. However, the main riff in "No Need to Be Human" is more technical and also slower. In fact, that song itself is slow, before having faster rage worth killer moshing inspired by Slayer and Exodus. That's definitely a psychotically great song that would make you fear the following song to be filler. Fortunately, "Read My Scars" is more killer than filler. It starts with a war-march-like beginning before having an excellent verse filled with incredible riffing, especially when the bass and guitar mix. Then it breaks into speedy thrash metal with a scaling solo bridge, while still sneaking some progressive ideas. Once again, that's how progressive thrash should be done!

"D.O.A." starts with f***ing creepily incarnated guitar thrusts carrying on into the verse. It makes you feel the fear of an awake surgery patient lying on the table staring at the sharp hooks on the wall hanging sharper knives and the surgeon examining you with his bloodshot eyes. My favorite song in this album is "Mistress of Deception", which after the first minute, the frantic fills make you feel the pain (in a good way) of the patient when the surgeon slides his scalpel into one of the patient's eye sockets over the eye to remove a cancerous part of the cranium. The rhythms and leads are highly notable, especially in the bridge. That might wet your pants more than a wet dream...

The more strategic "Tunnel of Pain" has a hammering bass intro before a neoclassical spiral that would make Beethoven look down from heaven in awe. I love the bridge where the bass shines in tranquility before an incredible breakdown, followed by arching leads. "Why It Hurts" is the climax where the aforesaid surgery is at the most painfully hurting stage (I don't know what that would be, but best not to know). It's more superior, compared to "Last Entertainment" which seems too stretched out.

No More Color is another killer Coroner album in my opinion. It is one of the greatest achievements in technical thrash, though fans of Celtic Frost and Megadeth might not agree. With this album and Mental Vortex at the top, I'm proud of this band for what they've accomplished. A h*ll of a technical thrash surprise!

Favorites: No Need To Be Human, Read My Scars, Mistress of Deception, Why It Hurts

Some bands that profess to be "technical" thrash hang their hat on their technicality and forget about what makes for great thrash metal. This often results in albums that, although being technically admirable, are somewhat sterile sounding and lacking in punch. Fortunately, this is far from true of Coroner and particularly this, their third full-length album. First of all this album thrashes like a motherfucker with Tommy T. Baron firing off red-hot riffs and rhythms that will set your head a-bangin' and your heart pumping. Those riffs are precise yet are still fired with a passion and aggression that is vital to decent thrash metal and the solos are incendiary with never a note sounding out of place. Ron Royce's rasping vocals are in the vein of "classic" thrash and his basswork is driving and busy, while Marquis Marky's drumming is exemplary throughout (although I would have liked to have heard it a bit higher in the mix).
Interestingly Baron and Marky were once roadies for Celtic Frost, presumably picking up a hint or two from Tom G. Warrior about making interesting yet exhilarating thrash metal records. Weighing in at only 34 minutes this is quite a short album, but I have no problem with that at all, this is a lean, mean thrashing machine and needs no padding. With superb tracks like Die by My Hand, Read My Scars and Tunnel of Pain there is more than enough packed into it's runtime to satisfy even the most demanding metalhead.