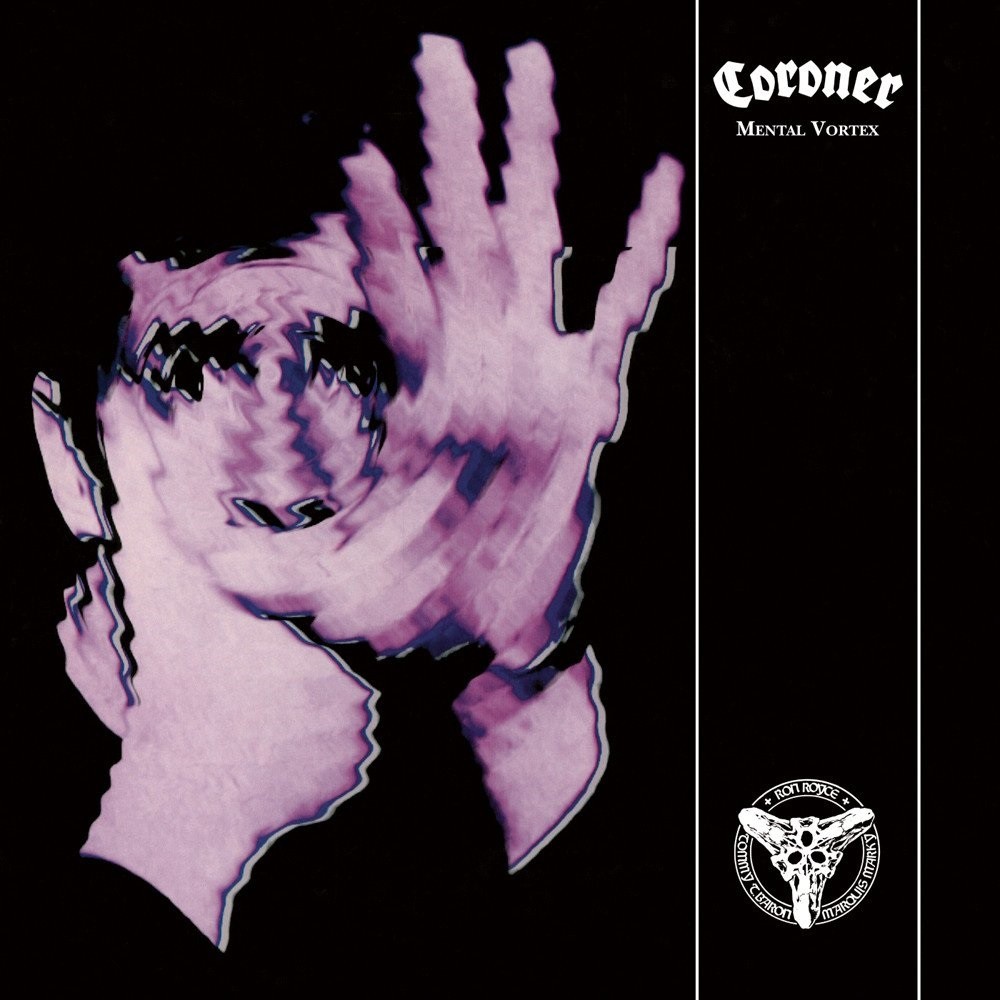 Coroner are one the most underrated bands in metal. Every album they released was gold and Mental Vortex is one the many highlights of their too short career. This album fine-tuned what was already a great technical thrash metal sound and upped the song writing to near perfection. At first listen, it would be easy to write these tracks off as being simplistic as they are generally mid paced, easy listening style thrash metal. But there are a whole bunch of jaw dropping riffs and Tommy's lead work is second to none (and I mean that!). The solos on this album are some of the very finest I've ever heard, managing to be technically genius while completely memorable and unobtrusive to the solid tracks beneath. I can't praise him enough, so I'll stop trying.

Opener Divine Step is the fastest track on the album and gets the blood pumping immediately. A multitude of cracking riffs get things underway and the album never really drops the ball until I Want You, which is incredibly a Beatles song. It's not that this track is bad either, as Coroner manage to give it a total overhaul in darkness and heaviness. It just stands out like a sore thumb as being a completely different mood to the rest of the album, which is why I generally hate covers. Other highlights are Son of Lilith, Semtex Revolution, Metamorphosis and About Life. Not to be missed if you enjoy technical thrash metal that's not afraid to explore the slower, less chaotic realms of the genre.

After pleasing the metal community with their earlier albums, Coroner decided to pack in more progressive supplies and stun the audience into an oblivion of astonishment, pushing them out the window into a brave new inescapable reality of precise craft. A new creation was made by a touring power trio who want to fly through a world beyond just a cult following. That offering is their 4th album, Mental Vortex! Any fan of Coroner would recognize a different aspect in this album; more controlled zen. There's still the climatic escalating touch in the guitars performed by Tommy Vetterli, alongside their earlier heavy wonders being nicely surpassed by experimentation.

It's a little bumpy ride through the overall heavy quality, but it all works out. It would take one last album (Grin) to mess up that direction and make the band take a downward spiral to splitting up. Mental Vortex is absolutely stone-solid, proving that the band just might be the Swiss progressive thrash metal legends people wish they would return with many songs blowing their minds.

The opening track "Divine Step (Conspectu Mortis)", I now recognize as the enormous starter progressive/thrash metalheads really love. It frantically yet decently punches through the discordant verses and riffs, powerful enough to blow my mind harder than a head-shot through the temple. I also enjoy the mellow bridge that contrasts against the typical heaviness and metallic guitar strength. What I thought was too out of place is now in place again! "Son of Lilith" is also a progressive thrash favorite of mine that I finally recognize to have killer riffs that build tension. More superb content comes after those first two works of art...

"Semtex Revolution" flows in simplistic speed, alternating with arching melody and nice vocals in a steady beat. "Sirens" continues that same speed flow with amazing vocals in the verses and a quick killer groove breakdown just near the two-minute mark to lift the steady thrash that appears in other sections. "Metamorphosis" starts with strange whale noises over smooth bass before the melodic guitars play an incredible riff march that you would be surprised no one else has tried it before.

Another great song of the bunch, "Pale Sister" cycles through great guitar frenzy faster than a speeding BMX bike, a sweet chorus, great leads, and a catchy breakdown in the end. "About Life" sounds closer to the band's earlier heavier material with a superb note pattern charging through the verse. The album ends with a cover of The Beatles' "I Want You (She's So Heavy)", probably the most notable element of the album. They did an effortlessly great job performing the song, even bringing our old friend, darkness to a new height of light. If there's one thing wrong about this song and the album now, it's that f***ing abrupt cut that was kept in!!

With all these advantages throughout this album, the band has gone through a labyrinth of progressive genius or boiling down their writing to the musical themes that have been important. There's another more visible thrash band take a different route in 1991, Metallica, but unlike Metallica, Coroner were standing by their origins. Because of that, I can now see that Mental Vortex has as much to offer as the band's earlier albums. They still had the dark superior riffing of thrash at the time when thrash metal was halted by impersonation genres, alongside half of their frantic displays of passion that put them in line with other promising European metal bands, all in creative curiosity. Sadly, this direction would swiftly descend into the mechanical groove of their last album Grin, and there would be no turning back.... My love for Coroner is fully on!

I can't quite think of any other band in the thrash metal genre that has the flow of Coroner?  Certainly without any elements of groove metal being incorporated at least?  The technical yet scathing delivery of Mental Vortex is both entertaining and innovative in equal measure.  Progressive structures, catchy riffs, grim and gnarly vocals and deft musicianship all tick boxes on this release.  Whist not my favourite Coroner release, Mental Vortex gets fair amount of air time on Radio Macabre over the course of a year.

I think its popularity with me is largely around the accessibility and energy of it.  The riffs feel like they have real meaning and feel behind them, the leads exude passion and emotion and yet at the same time the whole thing just comes across as so sensible.  There's an order to proceedings here that allows all individual elements to breathe without ever becoming showy or flashy.  They even do a decent job of covering The Beatles  I Want You (She's So Heavy).  The restraint shown is down to the professionalism of the artists involved.  That knowledge of when to let rip and when to hold back and nurture a track is rare and the maturity really shines through on this their fourth full length offering.

Prior to this the band had built a solid discography, developing their technical and memorable sound since the early eighties.  By the time 1991 came around Mental Vortex realised all the experience and maturity you would expect in a band that has been releasing material for nearly a decade.

My only quirks with it are that it feels like a bit of slog to start, with both the first two tracks touching the seven minute mark I do drift a bit initially.  Overall though it is a fine example of a band hitting their stride and the music showing this.