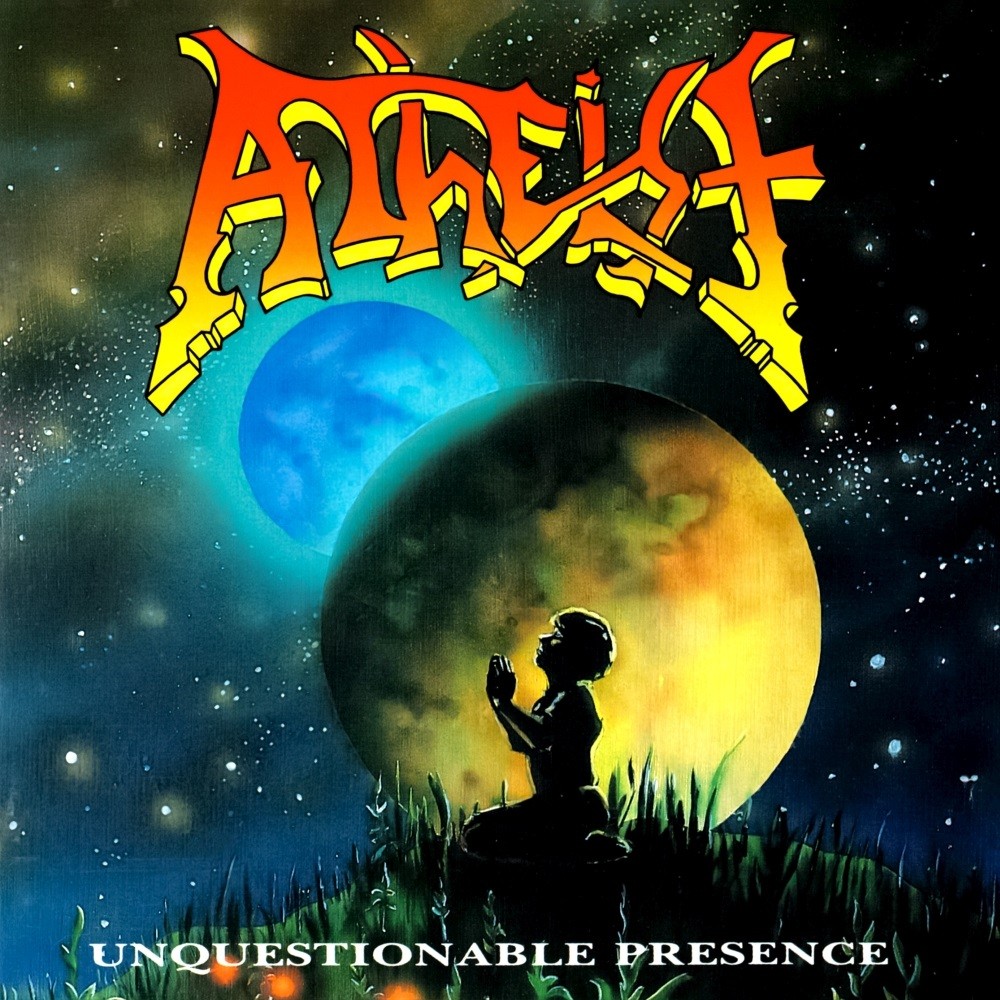 Atheist's Unquestionable Presence is a perfect example of what a death metal band made up of insanely talented musicians can achieve if they let their creativity and open mindedness reign supreme. This album has almost not constraints and it's for this reason that it manages to be so incredibly captivating for its admittedly short running time. One of the most impressive things about the album is that it somehow avoids coming across as pretentious. With all the variation in style and masterful musicianship throughout, Atheist were in real danger of pushing the boundaries of decency. But these guys obviously knew exactly what they were doing, placing awesome heavy death riffs between all the fretboard wankery, bizarre time changes and jazz fusion.

Steve Flynn's drumming is out of this world! Tony Choy is one of the very best bass players I've ever heard and considering he also played on Cynic's Focus and Pestilence's Testimony of the Ancients, is a total legend of the scene. But it's Rand Burkey and Kelly Shaeffer that steal the show. The constant flow of jaw dropping riffs and leads is simply astounding. Atheist have recently reformed for a reunion tour, but I must wonder whether they can pull it off considering Burkey is unavailable and Schaeffer was forced to give up playing guitar live due to tendonitis and carpal tunnel. Whoever takes over has seriously big shoes to fill. Highlights for me are Mother Man, Unquestionable Presence, Your Life's Retribution and An Incarnation's Dream. This album deserves its place among the elite of extreme metal!

Occasionally, when I'm sitting at my desk at work (and wanting to do anything but work), I'll just zone out for a bit towards the end of a long day. My mind will drift beyond the office walls and debate itself back and forth on some of life's great questions:

What role should the state play in regulating the Wild West of ideas that is the internet? How did ancient celtic pagans coordinate the building of Stonehenge before writing even existed? Is my girlfriend the one I want to spend my life with? Is Piece of Time or Unquestionable Presence the better Atheist album? Hmmm.

It was the last of these eternal debates that occupied my mind this afternoon. You see, the debut was one of my favorite death metal albums in The Formative Years (wink wink) of my metal discovery. Even having had listened to a little Death and maybe Cynic by that time, I had never heard riffs like those. Songs like the title track still hit me with the ferocity they did when I was 14. But then there's this album. By the time I finally got around to Atheist's sophomore effort, several years later, it had a much harder task than its predecessor in terms of impressing me. I was much more of a seasoned (and perhaps jaded) metalhead. I was on insanely technical stuff like Necrophagist and Obscura by that point. Even still, I immediately realized that Unquestionable Presence was superior from a musical and technical performance perspective. These songs took a ridiculous amount of Brains (heh) to compose, let alone play. To this day, I would cite this as THE best example of Jazz Fusion being effectively woven into a metal template. I mean, already on the opening track, you have that jazzy bass transition out of nowhere. Dear Lucifer.

That said, this album took me much longer than the debut to actually love as a listening experience. It was clear that Atheist were trying to take the musical ingredients that gave Piece of Time a unique flavor amongst the death metal horde and amplify them to the nth degree. But ludicrous bass pops, sudden time changes, sophisticated jazz-influenced drumming, and wicked solos don't automatically make for better music. My initial opinion was that, in elevating their prog leanings and technicality, Atheist lost touch with what made great metal songs.

Fortunately... I was wrong! It's true that Unquestionable Presence lacks the youthful aggression of Piece of Time, with less of those thrash and tremolo riffs, but there are plenty of other death metal albums in that vein. There's only one Unquestionable Presence. What's the difference? Well, like many other Extreme Metal albums recognized as masterpieces, what makes this album special is the band's ability to fit genuinely memorable songwriting (dare I say catchiness) into their particular brand of brutality/technicality in a natural way. Atheist's particular brand, of course, revolves around being able to play with mind-bending musicality that most bands simply can't, and this complexity initially obfuscated the effectiveness of the songs to my ears. But when you pull it back, after multiple listens to digest, you start hearing that songs like "The Formative Years", "Unquestionable Presence", and "And the Psychic Saw" have the bones to be great, kickass metal songs even without the extra bells and whistles. I personally know the title track has gotten stuck in my head many times. "Enthralled In Essence", my favorite on the album, deserves extra-special recognition. It physically transports me to those planets on the album cover, accomplishing the rare feat of inducing a certain feeling in me as a listener that is completely unique, unable to be replicated by any other song. The first solo entrance is beautiful and that climax part that enters at 2:56 is downright alien and otherworldly. Enthralled in the essence, indeed! Not every single song manages to be quite as great as some of the ones I've mentioned, which is why this is a Strong 8 instead of a 9 or 10. But there certainly aren't any songs I would consider "weak" and the high points are true landmarks in the history of metal.

...So which do I like better, Piece of Time or Unquestionable Presence? The debut has such a deep place in my heart that I will never be able to proclaim otherwise for sure, but Unquestionable Presence is the album that I find myself coming back to much more often nowadays. All I know for certain is that I'm thankful that I gave it the time build an Unquestionable Presence (grooaaan) in my head. Because once you've digested all the twists and turns in these compositions, this album is so much fun to listen to.