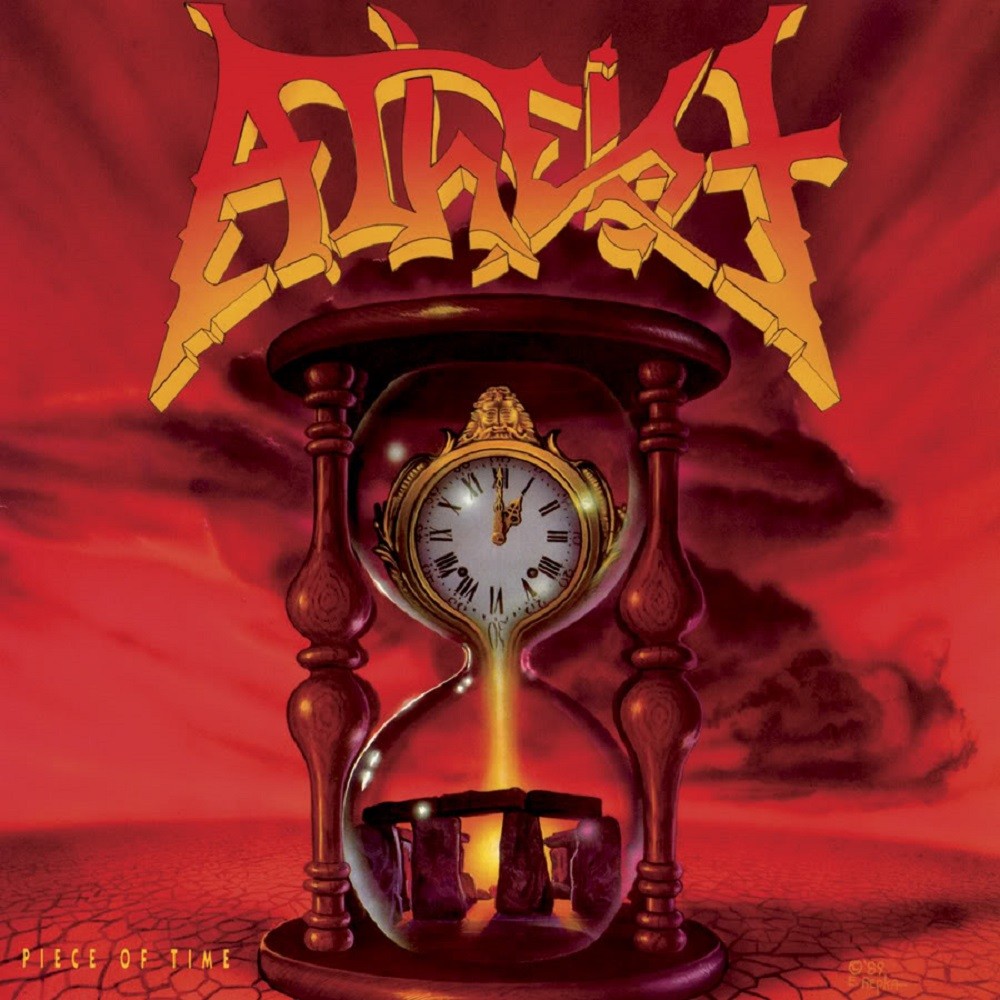 Atheist’s Piece of Time was such a ground-breaking album back in 1989. Whereas death metal in general had started to really get moving by this stage, with bands like Death, Sepultura and Morbid Angel releasing great albums, nothing this progressive and technical had been mixed into the genre. These guys were awesome musicians and knew exactly how to combine their jazzy experimentation with brutal death metal.

Randy Burkey and Kelly Shaefer created jaw dropping riffs and leads all over every track and Kelly’s vocals were unique also, managing to keep things completely intelligible while managing a hardcore, throat ripping growl. Steve Flynn’s drumming was first class, as it would have to be with all the time changes and guitar wizardry going on. It’s not often that I write about bassist’s in my reviews, mostly due to the fact I can hardly distinguish them on a fair amount of metal albums, but Roger Patterson’s work for Atheist led the way for bands such as Cynic, Pestilence and Death to utilize it as more than a sound filling instrument.

Favourite tracks for me are Piece of Time, Room with a View, I Deny and closer No Truth, but the whole 30 odd minutes are fascinating. I can only give it 4.5 due to how short it is, along with the fact that the next album would be even better. Atheist are not an underrated band, as most reviews are praising. But I do think that they don’t quite get as much credit as they should for kick starting what is a genius style of music, influencing thousands of long-haired metal lovers to raise their level of technical proficiency to a whole new level.

Florida tech death/thrash legends Atheist's 1990 debut album "Piece Of Time" made a significant impact on me & was high on my rotation list at the time but as soon as their follow-up "Unquestionable Presence" was released I kinda forgot about it as the band's sophomore effort was a clear step up from the debut & an undeniable classic. It's been interesting to rediscover the point that Atheist were at in their creative & artistic journey with "Piece Of Time" this week as it's generally regarded as somewhat of a classic too.

The opening title track is an absolute belter & sounds exactly like the material from "Unquestionable Presence" which is a sure-fire indication that it was the most recently composed track included on the album. The other material sees them varying the amount of traditional thrash metal & more progressive elements & I'm willing to bet that I could piece together the exact order that the tracks were written because you can easily hear the band developing their sound over the course of the nine songs. For that reason, I've never found "Piece Of Time" to be quite the finished product however it undeniably represents a huge step up in ambition for the extreme metal movement. No one had attempted anything like this before & the more atmospheric & progressive parts of the album were a particular revelation that would be expanded upon significantly on later releases. Death, Cynic & Pestilence can all be found to be trying very similar things in the years that followed too & I don't think that's a coincidence.

The level of musicianship on display here is absolutely outstanding, particularly the shredding lead guitar work & Roger Patterson's super-interesting bass lines which take an up-front position in the mix. Kelly Shaefer's vocal delivery has never really struck me as being particularly "death metal" though & sounds more like a raspier thrash front man like Sadus' front man Darren Travis than it does Chuck Schuldiner. I probably would have preferred a little more extremity there to be honest but then again... that may have changed the feel of the album completely so it may be for the best.

Overall, "Piece Of Time" is a ground-breaking & highly influential debut that offers consistent quality & strong hints at the potential that was to be fulfilled in the coming years.