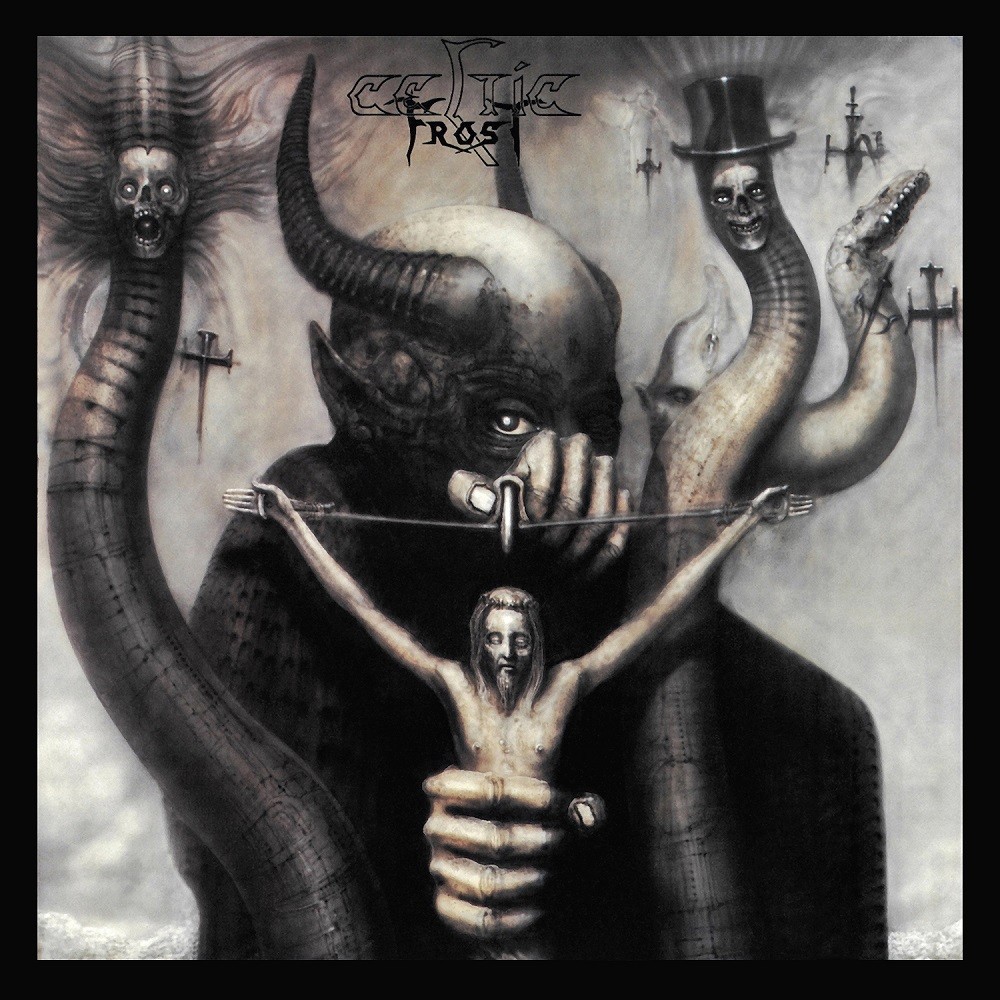 Celtic Frost was one of the most diversely stylistic metal bands to start in the 80s. First was their black/death-influencing thrasher To Mega Therion, then they released the avant-garde Into the Pandemonium, followed by the glam-infected Cold Lake. They released a gothic-influenced thrash album Vanity/Nemesis before splitting up, and later reformed for one more extreme doom album Monotheist. Since I'm listening to Mega Therion to settle a DIS vs DAT debate, let's get right into the review!

Heading right to the point, To Mega Therion (The Great Beast) is actually one of the best 80s metal albums I've heard. I'm still not very tolerant to albums that old nor that obscenely extreme, but I can see why people consider this the most fascinating Celtic Frost album. However, there are some things to argue about...

The pompous intro "Innocence and Wrath" starts the album with a doom-ish march with background brass, specifically french horns. Perhaps that part of the inspiration for Therion, the band who got their name from this album. Then kicks off the sinister fast pace of "The Usurper". That song and its aforementioned intro very well beat other openings of albums like Into the Pandemonium. Next track "Jewel Throne" has chord patterns to reflect the balance of primal composition against riffs of thrash energy and muscular drum groove intensity. I'm sure there are many other great thrash examples throughout the decades that followed, but a true thrashy metalhead would bang their head and swing their fists to those interestingly brutal riffs. I'm not even a fan old-school dark thrash metal and I'm already doing that!

With a song title like "Dawn of Megiddo", you know how well Celtic Frost would attack. The song itself once again has the strange french horns. "Eternal Summer" continues the chord balance between primal and despair. "Circle of the Tyrants" pumps you up with apocalyptic heaviness. "(Beyond the) North Winds" needs a little time for you to really see its full potential as mid-tempo-ish piece that's absolutely underrated compared to Metallica. The upbeat ghost-like guitar leads in the bridge give the song its special scent that would inspire later extreme metal bands.

"Fainted Eyes" is an aggressive piece of heavy shock that works as a black metal prototype song, once again having its apocalyptic heaviness. "Tears in a Prophet's Dream" is an extravagant yet incomprehensible sound collage that wouldn't blow any minds. Finally we come to the gigantic closer "Necromantical Screams" complete with horns, timpani, and female vocals without neglecting the morbid heavy black thrash. OK, that has to be what inspired Therion!

Was this review convincing enough for anyone who hasn't listened to this 1985 classic to do so? Either way, you definitely don't wanna miss out on its highlights (see below) for their best extreme delivery. This important album needs more attention! Sadly, Celtic Frost would never reach the brilliance of this album ever again.... AAAARRRGGH!!!!

I found it hard to enjoy the Hellhammer material. It was raw and messy and not particularly interesting to me, no matter how ground-breaking it was. The first Celtic Frost release Morbid Tales was a tighter, better produced version of a similar sound. Once again, I didn't find all that much that was memorable or fun to listen to on that release.

But this album is where I finally get what it is that attracts so many to this band and the one that proceeded it. It's a much tighter affair, the production has been beefed up once again, but this time the songs are finally excellent. The band started to inject some of the experimentation that they are known for, with some female vocals, symphonic backdrops etc, and the album has fantastic artwork from the warped mind of HR Giger which I really appreciate.

It's hard to pinpoint why I suddenly like Celtic Frost on this album as overall, it still relies heavily on the crawling riffage that was prevalent on the previous releases and Warrior's distinctive drawl. I think it's just that the band finally put their sound to good use, creating truly dark, gripping tracks such as Circle of the Tyrants, Jewel Throne etc. Still not one of my favourite bands but this album is highly entertaining!

I constantly vacillate between this and Reign in Blood as to which is my favourite thrash album of all time. I think it probably depends on my mood at the time. To Mega Therion holds a special place in the metal pantheon for me, however. I was a relatively new convert to thrash metal back in 1985 and picked this up mainly because of it's Alien-like H.R.Gieger cover, knowing nothing of the band itself, other than they were a Swiss thrash band (probably gleaned from a Kerrang! article, back when they still had decent taste).
After the bombastic intro of Innocence and Wrath, I was completely blown away by the downtuned riffs of The Usurper/Jewel Throne duo, as if Tony Iommi had been possessed by some Sumerian demon and let loose upon the earth. Tom G. Warrior's evil-sounding vocals and trademark "death grunts" only adding to the impression. To my unsuspecting ears, this album was like a metal version of The Exorcist - and I had let it into my house!
Dawn of Megiddo is virtually doom metal and an early indicator of where CF would ultimately end up. Then from Eternal Summer, via Circle of the Tyrants and (Beyond The) North Winds to Fainted Eyes is a solid thrash attack that is a lot faster than it appears, the downtuning of the riffs making it seem less aggressively paced than it actually is. Tears in a Prophet's Dream is a short, eerie ambient soundscape that sets up closing track Necromantical Screams with it's huge-sounding tympani drums and weird spirit-like backing vocals it sounds like it should be played in some ancient, decadent emperor's court.
This really was completely unlike any other metal release I had heard before and cemented Celtic Frost as one of my favourite metal bands, despite several subsequent attempts to piss me off! A unique band and a true 80's classic.