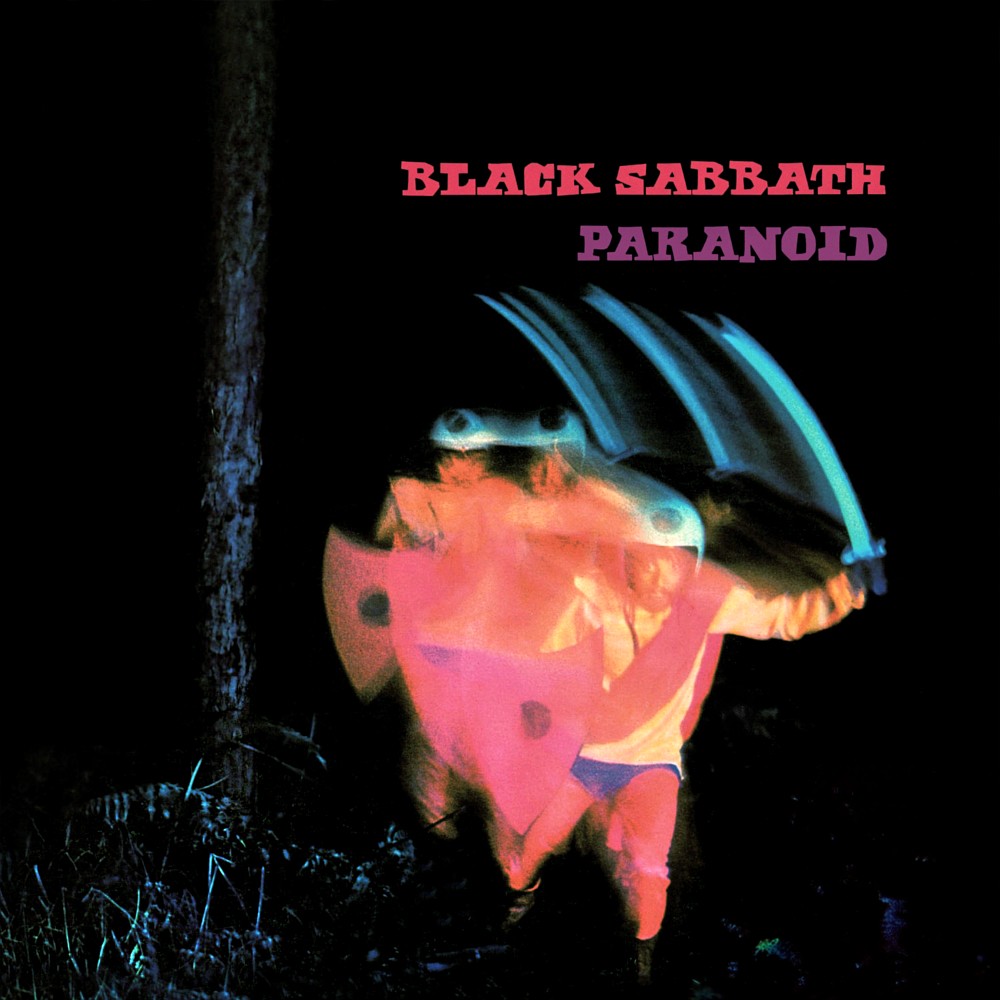 I’m not the biggest fan of Black Sabbath. Admittedly, I got into metal around the end of the 90’s, and by that time Sabbath seemed a bit dated to me. I was all about the rising nu metal scene, as well as the thrash metal bands which were still hanging in there (just about). Of course, I gave Sabbath a chance, and in fairness, I don’t dislike them, but ‘Paranoid’, supposedly THE greatest metal album of all time, just doesn’t quite work for me.

None of the guitar riffs, which are meant to be some of the greatest guitar riffs ever, or so I’ve heard, don’t really do anything for me. Maybe it’s the production of the time, but they just seem kind of dull and flat, lacking the audible punch that later bands would have. Ditto for the vocals.

Maybe it’s just a product of its era, but then, I listen to a lot of other music from different eras, so surely that can’t be it. Maybe it’s just been so overhyped over the decades that there was no way it could live up to my personal expectations. Maybe there’s something wrong with me. I don’t know. It’s got the likes of ‘Paranoid’, ‘Iron Man’ and ‘War Pigs’, which, again, are meant to be some of the most iconic metal songs ever, but I can’t really think anything more of them than “they’re okay”.

Heavy metal was still a fledgling and evolving genre at this point. How could it be possible to really create such a classic’s classic in such early days? An important and inspirational album? Yes. A pivotal moment in metal history? Sure. But being better than anything that’s come since? Really? Maybe bands joke about it, but perhaps the adage that “Black Sabbath created metal, [insert band name here] perfected it” isn’t too far off.

I don’t totally dislike Black Sabbath though, and I think over time they do go on to produce far better works than this. But I just can’t get into this. No matter how much I love my rock and metal, ‘Paranoid’, arguably one of the most highly revered and beloved metal albums of all time, just doesn’t quite do it for me.

If the debut established Sabbath as the most historically important act in metal, then follow-up Paranoid cemented their position as one of the Metal Gods. Every single metal album you have listened to owes a debt of gratitude to this classic, an album that defines exactly what metal means. The pacing is perfect, the songs are anthemic and the musicianship, though some may say it is neanderthal, is flawless as the albums eight tracks pretty much carve in stone the Metal Commandments.

Tony Iommi was always an absolute riff machine - he could no doubt write riffs in his sleep while lesser mortals are only able to dream of such an ability - and here on display are some of the most memorable riffs ever written. Coupled with those riffs is one of the most recognizable voices in metal, Ozzy commanding his space with a presence and confidence very few have ever matched. Geezer's busy and irreplaceable bass playing underpins the whole and Bill Ward's jazz-influenced kitwork is not mere piledriver pummelling but is loaded with fills and never misses a beat. This is the sound of a young band riding high, with their creativity and energy being chanelled in a unified direction and defining a sound for generations of as yet undreamed of metal hordes. War Pigs, Iron Man, Electric Funeral and Hand of Doom - which self-respecting metalhead doesn't know these tracks not as mere songs, but as if they were irreplaceably part of him- or herself?

On a personal note, this is the album that got me into metal in the first place. As a kid and young teenager I had graduated from The Beatles to Bowie, T-Rex and Queen then had become exposed to Pink Floyd's Dark Side of the Moon which was a real mind-fuck. But then along came Paranoid and something just clicked - I knew I had found a lifelong soulmate and metal seeped into my blood and has resided there ever since.

Well, here we are, the album that started it all. The album that began a new revolution in music. A revolution, which without, this website would never exist... at least if you believe the mainstream. Paranoid is actually Black Sabbath's second record, also released in the same year as the self titled debut.

Fifty years ladies and gentlemen. It has been half a century since Ozzy Osbourne formed Black Sabbath and changed the landscape of rock music forever. And I have very little to add to the discussion about this record that has not been said countless times across countless websites like Metal Academy, RateYourMusic, and other critic sources. So allow me to add some very short, but much needed dissent in relation to this album: it is not as good as the self titled debut.

Oh it starts excellent: the opening track "War Pigs/Luke's Wall" has a great opening riff and the siren before the opening is the perfect, ominous opening that an album of this magnitude needs. The album has songs that are sacred among the metal community: "Paranoid", "Iron Man", and "Electric Funeral", although "Hand of Doom" is my personal favourite and the one song that gets slept on by far too many.

The production on this record is quite solid even for its time. Lots of bass presence and the distortion of the guitars gives it the crunch without compromising the lower end. The vocals are iconic at this point and Ozzy's vocal timbre is still heard attempting to be replicated to this day.

But here is where my major gripe takes place. Paranoid is too commercialized. Now I will admit that accessibility is not always a bad thing, but it is quite clear to anyone who listens to the first record that this group doesn't want to be on the cover of Rolling Stone or some other music publication magazine; Long songs to go along with its doom like content. Paranoid meanwhile chooses shorter songs, more groovy tunes and clearly plays into a Led Zeppelin/Deep Purple vibe. For lack of a better term, this album falls by the wayside in comparison to the following bands that it influenced. S/T meanwhile was one of a kind.

I feel like Paranoid is remembered more fondly because of its singles rather than its influence. And I don't think that any of the singles on this record are bad; quite the contrary actually. But like with all styles of music, a root is not necessarily the prettiest thing to look at. It's not until you've watered it and let it grow that you witness your plants true beauty.

What better place to start the Metal Academy Heavy Metal - The First Era challenge than with (almost) the album that started it all?

Of course, Paranoid wasn't truly the first, that honour going to Black Sabbath's self-titled debut. But it was Paranoid, released a mere seven months after the debut, where Sabbath would really start to refine their craft. No covers this time, and while the blues influences are still there, this time it's a head-first dive into the origins of doom metal. And what an end result.

Paranoid is an album all about death, ruination and endings. It is grim, obsessed with the darkness of the world and humankind. It is doom metal, truly and utterly. "Iron Man", opening with the infamous, apocalyptic pound, is a tale of a scorned, vengeful man of iron, with the faster beat of the drums towards the end like the onrushing doom of his victims. "War Pigs" rightfully lambastes the powerful people of the world who enable the horrors of war, with Ozzy's vocals often isolated and solitary to hit all the harder: there's no ignoring their message, delivered almost like beat poetry.

"Paranoid", despite its higher tempo, is all about mental turmoil and chaos. It has a driving beat, but one driving straight off the edge of a cliff into oblivion. "Hand of Doom" gives us a stark look at drug addiction - that quiet opening is menacing enough the first time, but when it rears up again nearer the end it takes on a whole new meaning, painting the image of someone withered and broken, nothing left to give, drained of all energy. "Electric Funeral" is a deliciously dark dirge, a constant, mournful funeral march for the whole human race in the wake of nuclear war.

"Planet Caravan" is sometimes considered a bit of an outlier track here, and I can certainly see that, but I think it fits in in its own way. It's a hypnotic, otherworldly piece that typically conjures images of a transcendent hallucinogenic trip, though could also be taken more as something about ascending beyond life itself. I find it an enjoyable break if nothing else.

Where I -do- find a starker shift in tone is in the last two tracks. "Rat Salad" is another short one, but where "Planet Caravan" takes us on an ethereal trip, this one is more a couple of minutes of jamming out. Nothing bad, but it doesn't really add anything. "Fairies Wear Boots" is the only "full" track that really sticks out from the general theme of the album. It just kind of exists, never really going anywhere or fitting in with the other tracks all about doomsday or personal turmoil. Especially with it's somewhat more upbeat, almost jazzy instrumentation, it feels more like a leftover from the debut.

Neither of these final tracks are outright bad, but they leave the album closing on a much weaker note than the rest.

As on the debut, there's a darkness here that's so fresh. Sure, there's plenty of rocking groove and still some traces of their early blues influence, but it's all so ominous and heavy. That dark atmosphere is what made the opening track on Black Sabbath itself so good, and here they take that and make it work over (almost) an entire album, capitalising on their strength perfectly. Paranoid isn't just a historically important album, it remains a benchmark and measuring stick for dark, heavy music.