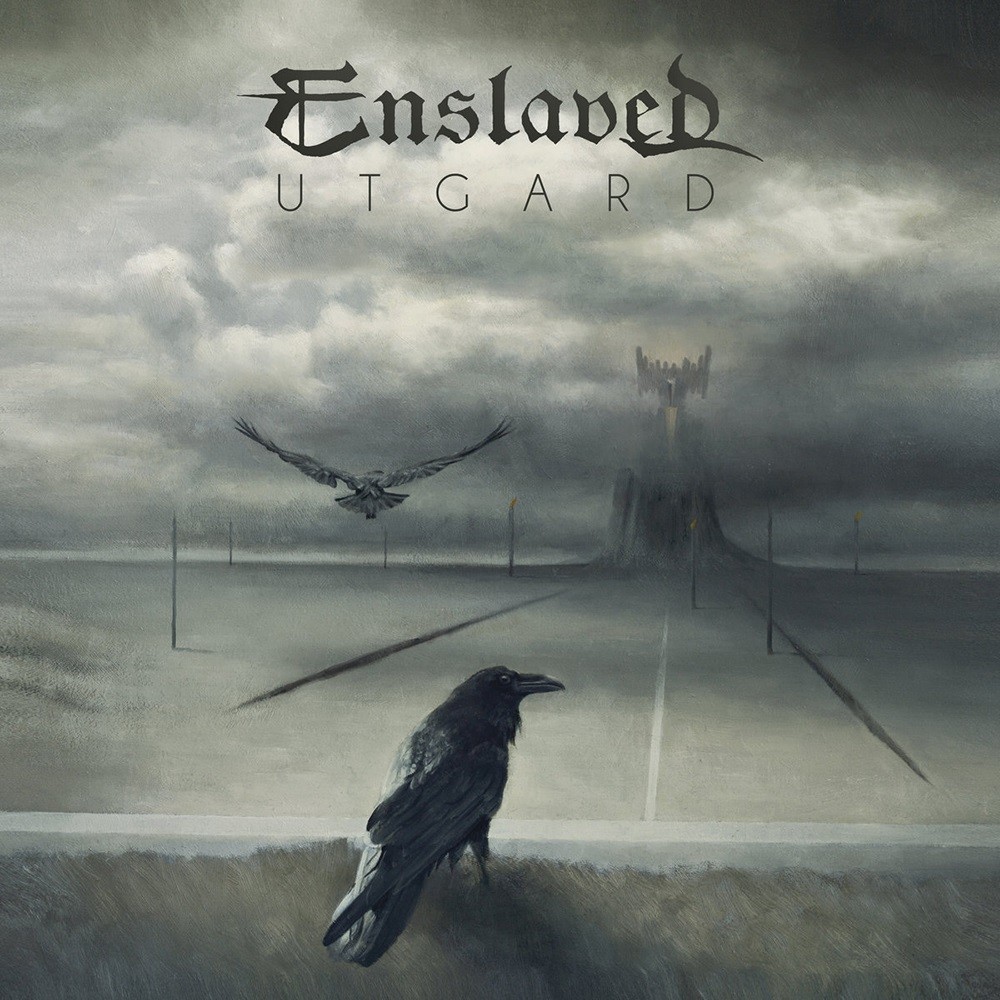 Not a lot of the younger Enslaved fans know this, but Enslaved originated from Norwegian black metal's second wave in the early 90s, and their listeners at the time thought they would stay strictly black metal forever, but they were wrong... After a few albums of blood, fire, and death, they decided to start their own by planting different seeds into their Scandinavian soil. Unlike Mayhem, Darkthrone, or Gorgoroth, who prefer to be strictly fierce black metal, Enslaved decided to join the other side of pack including bands like Emperor, Satyricon, and Arcturus to add spices of creativity for new sounds in black metal. That's where Enslaved's avant-progressive black metal comes in!

30 years into their tenure, Enslaved continue their surprise factor. While having their own signature formula of Ivar Bjørnson's distorted riffing and Grutle Kjellson's demonic screaming, their progressive era (starting with 2008's Vertebrae) is different in each album. Broader and less complex than E, their new album Utgard has a concept that should be related to the music, in a dream realm with giants and no gods. With attractive atmosphere, this album is basically a seductive portal to said realm.

After Nordic chanting opens "Fires in the Dark", the rest of the song provides you with evidence of the dream realm. The lyrical concept and music collide in "Jettegryta", a gigantic-sounding progressive black metal song! From mythology to psychology, an abysmal sensation peeks through mountains and valleys in an insane rollercoaster of Enslaved's usual soundscape. "Sequence" has an odd start but has a great sequence of moments. I love its outro because even though it sounds like there should be more there, it reminds me of the ending of the album In Times with its finale "Daylight".

"Homebound" is good with its multiple immersive riffs, but not as amazing as those first 3 tracks. It's all good until the dark ambient title interlude. The spoken narration is fine, but for a title track, it doesn't capture the essence of the album like it's supposed to, leaving a confusing filler interlude. Nothing but one-and-three-quarter-minutes of droning narration about the darkness of life. Then we have to wait that same length through the electronic synths of the industrial-ish "Urjotun" before the actual music, which is just mostly an homage to the space-punk of Hawkwind while keeping some of the black metal. That song and its prelude are the reason why this album doesn't reach the otherwise perfect 5 stars, and probably would've been lower than the current 4.5, if it weren't for 3 more excellent songs...

"Flight of Storm and Memory" isn't exactly boundary-pushing but I totally appreciate the streamlining through the heaviness of Vertebrae. Same with "Storms of Utgard", especially its Pink Floyd-ish solo that is quite common in the band's current progressive era. "Distant Seasons" is an OK ending, but you'll definitely be wanting more after that one, despite the album just being released 4 months before this review (would've been earlier if not for the ongoing pandemic).

In summary, while Utgard is considered less complex than their previous records, there's a lot of grand background atmosphere created by keyboards and orchestration to be injected into the album's metal muscles. I dare you to find a song in this album (not including the title interlude and "Urjotun") and find something bad about it. You won't!

Enslaved have fallen very comfortably into the same categorization that I would include a band such as Dream Theater. That is to say that they have been very respectable progressive metal for the better part of thirty years, with some occasional standouts that will keep the group recognizable enough as industry legends. At the same time however, their approach to songwriting has become remarkably safe in recent years. After the bands pivot from atmospheric black metal to a more progressive black metal in the early 2000s, albums such as Below The Lights and Axioma Ethica Odini have kept this band relevant, but the rest of it feels very underdeveloped by comparison.

And even though I did enjoy 2017’s E, I was worried for Utgard. And my worries were fully realized within the first two tracks of this album. There really isn’t all that much to say about this record that hasn’t been said about the band's entire discography the past ten/twenty years. The music is really well produced, the compositions are quite tuneful for this brand of progressive metal, and everyone within the band plays an important role in letting these songs build in dynamics and presence.

But does anything resonate in the same way that “As Fire Swept Clean the Earth” does? Hell, does anything resonate greater than “The River's Mouth” from the last album? “Homebound’ comes the closest, while songs like “Sequence” and “Urjotun” are just slogs to get through. I was quite comfortable with the more dreamlike nature of the closer “Distant Seasons”.

At this point, I’m not sure that Enslaved needs to innovate further to stay relevant. They are legends amongst the blackened folk metal and progressive communities, and records such as Axioma Ethica Odini and RIITTIIR are legendary in my books. I can see Enslaved as a legacy act in the same way that I did with Deep Purple’s most recent album Whoosh! If you like the stuff you’ve heard already, then Utgard is more of that. Otherwise, you will have to find your progressive blackened folk metal somewhere else.

I must confess to having been a bit disappointed by Enslaved's last album E and awaited their new opus with no small amount of trepidation. Luckily my fears have been laid to rest by Utgard. This is more in the vein of my favourite of their proggier (is that even a word?) albums, 2012's RIITIIR. Despite the progressive slant to their music these days, the tracks are actually quite punchy and are shorter than a lot of their black / viking metal classics - only two clocking in at over six minutes. This means there's no excessive prog wankery involved in the tracks, just concise, tightly written and musically varied prog metal.
Whilst Enslaved seem to be on a similar trajectory to that taken by Opeth a few years back and moving further away from their black metal roots, they still maintain enough of a metal edge to their sound to satisfy a large percentage of their original fans. That said, songs like Sequence with it's gently laid-back middle section and the kinetic, Krautrock-influenced Urjotun certainly make for an interesting contrast to the more (black) metal sections and evidence the band branching out ever further. Cato Bekkevold has been replaced by Iver Sandøy behind the drumkit who turns in a solid performance as such (particularly on opener Fires in the Dark) but he crucially adds another dimension to the dynamic of the band with his clean vocals. As always, Enslaved turn in a trademark technically superb performance and must be one of the tightest set of extreme metal performers this side of the aforementioned Opeth.
I guess if you wish to be negative, you could say that if you listened to this expecting to hear Vikingligr veldi or Frost II then you would be sorely disappointed, but those albums were over 25 years ago and the band have matured and branched out but, crucially, not sold out. I am not a massive follower of prog metal I must admit, bands like Dream Theater throwing out album after album of technical circle jerking just seems pointless to me, but when a band like Enslaved move into the area from a more focussed tradition, then I am on board because the songs seem so much more than just technical exercises (excesses?). In fact some of this is actually quite catchy even (Homebound, Distant Seasons) and Ivar Bjørnson can still write some thunderous riffs when he feels the need (Jettegryta, Storms of Utgard). So, despite lasting only 44 minutes, the variety in the tracks and their ability to grab the attention make for a seemingly much more substantial-feeling album that certainly had me reaching for the replay button.

Arguably one of the most developed and expansive acts in metal at this stage of their career, Enslaved have continued their penchant for delivering thought-provoking and intelligent metal into their fifteenth full-length release.  Utgard has a real assured sound to it, despite its title suggesting we may have expected otherwise (Utgard in Norse mythology is a landscape full of danger and chaos).  Yes it has all the progressive leanings you would expect with time-changes dropping in from out of nowhere and a near constant sense of build throughout the record, but its success is more subtle than that.

There's a freedom to the flow of the songwriting, never better exemplified than on catchy riffing tracks like Sequence , a solid chug with excellent stabs of atmospheric keys and strings to add depth behind the apparent simplicity of the main driving riff.  The lead work here flutters in like butterflies at first before becoming a maelstrom of hellish fire that scorches the middle section of the track for a few seconds before a calming ambience seeps into play.  It is rare for such an array of ideas and styles to all be so comfortable alongside each other, but they pull it off brilliantly and hold the listeners interest well throughout a varied and memorable experience.

On this record Ivar relinquished most of the work he normally tried to always get through himself and delegated the labour out across the band.  The outcome is an album that feels like it has had a high level of involvement.  Even in its busiest moments it sounds cohesive and unified, no matter where a track goes to it is obvious that all band members go with it.  The clarity of roles within the band has unlocked textures in the Enslaved sound that feel tightly woven together.  At the same time they also feel like they are covering new ground and exploring new territory and structures.

Checkout the 80's pop vibe to the opening of Urjoturn that presents a dark, new-romanticism to the ears.  As unexpected as it maybe, it works brilliantly structuring a haunting and yet catchy vibe that sits on the shoulder for long after the album is finished.  Grutle's blackened vocals combine with cleaner passages that add further to the depth of the track, maintaining the bm threat of years gone by but tempering this perfectly with a musical edge to challenge their presence at the same time.

After nearly two decades Enslaved maintain an innovative edge to their music that shows little sign of abating.  Utgard is bound to be a tough listen for some, but anyone who has been following the band's output over the last fifteen years will welcome the continued maturity and progression of their sound here.  It isn't boundary-pushing as such, but it is a fresh sounding record which continues to slowly expand the sound of one of metal's longest-serving bands.