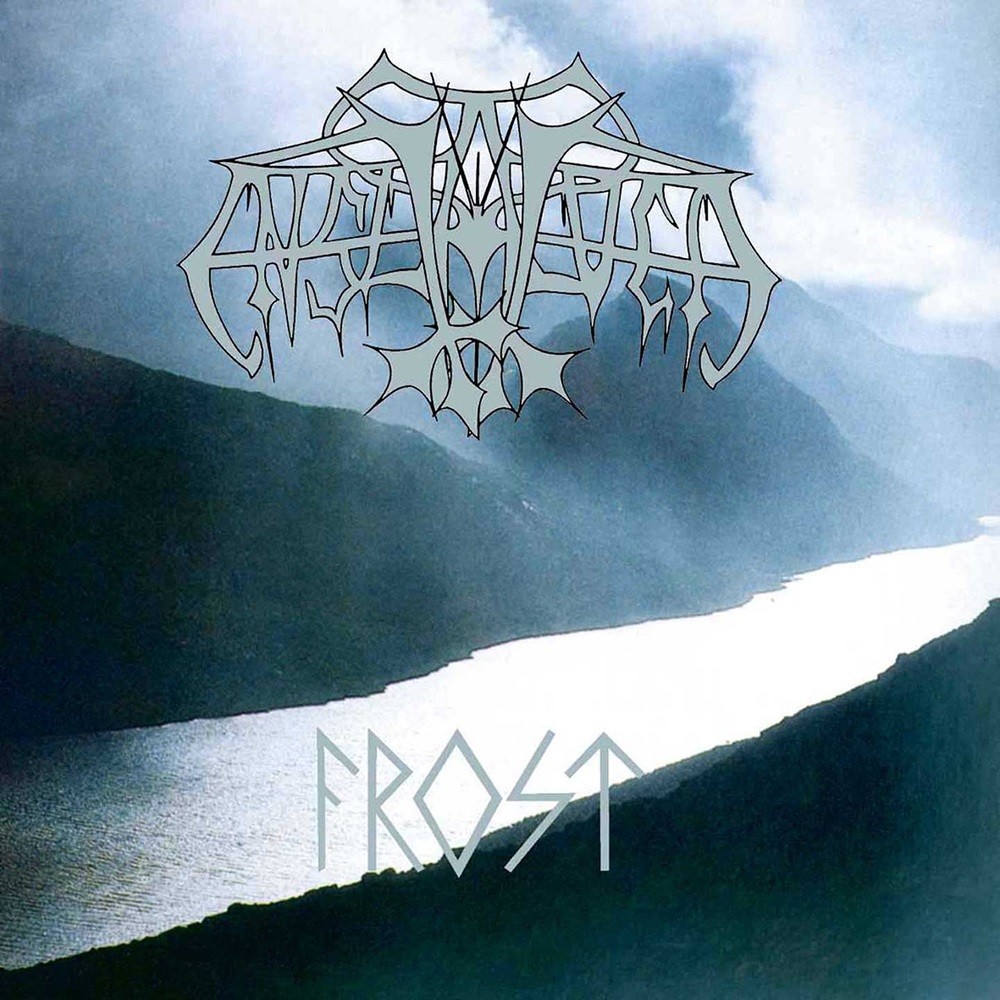 Enslaved certainly didn't muck around back in 1994. They managed to release two full length albums within the same year and it appeared at the time that they were going to be an immensely prolific band. As it's turned out they slowed their schedule down somewhat, but the band have managed an excellent, long career already (10 studio albums so far) and I can't imagine they'll stop any time soon. The strange thing about the two albums way back in 1994 is how different they are, but then how were we to know that Enslaved's evolution would drift so far from their roots.

The wonderful debut Vikingligr Veldi was made up of 5 drawn out yet fascinating black metal tracks that had a lot of emphasis on keyboards and repetitive structures. Follow-up Frost takes a different approach, with much shorter tracks in general, not to mention that there are 9 of them. The music is still well within the confines of black metal, but there is a lot more variation to proceedings, and while the repetitive structures pop up every now and then (such as on Svarte Vidder), for the most part Frost is a much more energetic and diverse affair. But while all of this may sound very positive, I admit that I enjoy the debut more than this one by a fair margin. It's not that Enslaved have lost what made them so interesting on Vikingligr Veldi. It's just that with all this variety comes with a level of inconsistency.

The opening instrumental is beautiful to say the least and Loke is a ripping black metal track that kicks things off nicely also. The previously mentioned Svarte Vidder is the track that’s most like the debut and works just as well as that material, but then things start to get just a little underwhelming. Yggdrasil finds the band entering folk metal territory which many may find very satisfying, but I sure don't. It's obviously an area that Enslaved wanted to delve into to take their viking influences somewhere fresh, but it just sounds awkward and just a bit embarrassing to me.

Thankfully the rest of the album follows more black metal paths with Jotunblod and Wotan being particularly aggressive and venomous. Both Gylfaginning and Isoders Dronning are a bit more atmospheric and have some really nice parts to them, but I can't help feeling that all these tracks are just a bit below the excellent standard that Enslaved have managed to hold for the majority of their creations. Frost is still a 4 star album as Enslaved is never anything but captivating, but I do consider it to be one of the lesser albums by an astonishingly creative and consistently amazing band. It's by no means an album to be ignored, but neither is it one to be showered with praise.

So I've already reviewed Enslaved's debut Vikingligr Veldi, and it was a turning point in the sinister genre that is...black metal! That album's Viking themes allowed Viking metal to crossover into part of the notorious Second Wave of Black Metal, along with progressive features like the songs being 5 long epics. But for their next album, Frost... Well let's say it's a similar turning of lengths to Opeth's 2nd and 3rd albums, though the first two Enslaved albums were released in the same year.

Despite the drastically shorter songs, Frost is an enjoyable atmospheric album. A lot more keyboards are used and done well, sounding like they're really part of the songs and in the right place and time.

The title intro is a synth overture with mysterious choirs. It's slow and would ease you into the action that you'll like later. "Loke" begins right after the intro, yet has a whole different atmosphere. It's fast and brutal with raw riffs. The mid-break is nice, but the ending is quite a creeper with maniacal laughing. "Fenris" has a short intro narration, and has a good buildup from there, leading up to the first verse. The song goes on with intense drums and riffs until the end.

"Svarte Vidder" (Black Plains) might have a title that's almost like the villain of a Scandinavian Star Wars remake, but the song has wonderful atmosphere. Over the two-minute mark is an interesting riff contributing to said atmosphere, while enhanced by tasteful background synths. After all the brutal riffs and drums from previous tracks, "Yggdrasil" is a nice relaxing all-clean Viking metal ballad. It starts with two minutes of slow tempo and clean acoustics, then the guitar distortion comes in while the vocals and the tempo stay clean and slow. This awesome track is the best here, taking a break from the chaos for true Viking spirit and the atmosphere of chilly Northern lands.

"Jotunblod" (Blood of Jotun) return to the faster black metal with madly astonishing screamed vocals by Grutle Kjellson. The synths are still around but less present to let the black metal fury be unleashed. The atmosphere is directly dramatic, and the drums blasts are absolutely relentless. "Gylfaginning" (The Tricking of Gylfi) blends doom parts and thrash riffs together with the usual epic black metal. The tempo is fast but just enough to let the bass and drums flow. "Wotan" is definitely the closest to black metal here, so I'll take it easy with the amount of listens for that one. The finale "Isöders Dronning" ("Queen of the Ice Desolates") may be longer that the previous 4 songs, but it never drones! There are acoustic arpeggios and chants while keeping the brutal guitars and shrieks. A perfect early example of pagan black metal!

Frost is an album that stands by its title with a unique atmosphere that makes a wonderful experience. While I enjoy the songs that are more than 5 minutes long, the ones below that length kinda make the album overlong. Still this is a raw atmospheric black metal album that fans of the genre might like, though definitely more than I do....