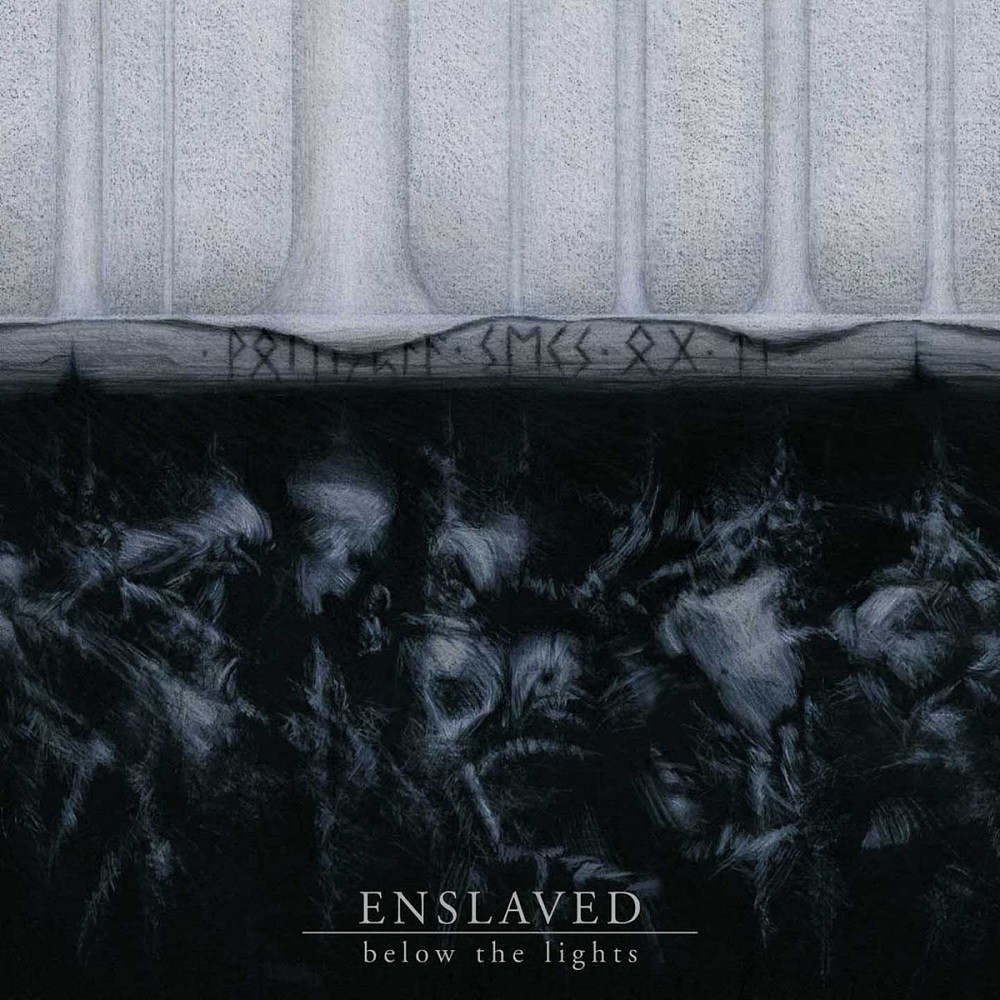 Criticism had plagued the underground side of reception for Monumension, but thanks to its success, Enslaved have been on their pathway to the extreme progressive metal hall of fame. Will that path keep building up? Certainly with one of the most important metal albums, Below the Lights! The prog influences of their previous album have been expanded. Also adding to the success is new guitarist Arve "Ice Dale" Isdal, who has stayed with this band ever since.

The raw black metal production of their earlier albums is no more, with the new prog influences adding another amazing advantage, more prominent guitars! Now the guitars are in the same production height as bands like Iron Maiden, especially in the guitar solos.

The unforgettable opening track "As Fire Swept Clean the Earth" is a superb demonstration of progressive black metal. The intro consists of mellotron inspired by classic prog-rockers Genesis, then of course gets twisted into black metal. The riffs stay aggressive in the organic production. Even the screams by Grutle Kjellson, while staying furious, are infected by the prog twist. "The Dead Stare" is another highlight with an atmospheric section of Pink Floyd-like soloing and keyboards. Contributing to the ethereal effect is the vocals that make that song sound so cool.

The atmospheric bass and keyboards in "The Crossing" are what make that song a beautiful work of art. "Queen of Night" is notable for more the guitar soloing complexity. "Havenless" is pretty much the ultimate Enslaved song, despite being the shortest song of the album (still decently long at 5 and a half minutes). There are Scandinavian clean chants from Enslaved's Viking metal past. The instrumentation help give listeners an accessible adventure.

The black metal blast-beat drumming is still present in "Ridicule Swarm" which also has some melodic sections. "A Darker Place" may be as long and psychedelic as a Porcupine Tree song, but there's never a weak moment!

Accessibility and complexity have been combined together in Enslaved's Below the Lights, which not only broke the laws of music physics but also defiled Norwegian black metal's rules. Defiler be defiled! Thanks to progressive metal's newfound popularity in Norway, Below the Lights is now a historical metal classic and the absolute best of progressive black metal. If you're like me, a prog-metal fan wanting to spice things up with a modest amount of black metal, this complex beautiful masterpiece is for you!

Favorites: "As Fire Swept Clean the Earth", "The Dead Stare", "The Crossing", "Havenless"

Now we are talking!  Far and away my favourite Enslaved release, Below the Lights is a work of great confidence.  The songwriting and and structure building that went into this record is nothing short of remarkable.  Add to this the blending of black metal with progressive elements to create an album that swims elegantly through its own torrid tide and you know you are dealing with a band at the top of their game.  For me they have slowly declined since this record, although I grant you that Isa as a follow up album is also superb, just not quite on the same level.

On their 2003 offering, Enslaved create clever black metal.  Unafraid to stick to tried and tested formulas as well as explore further the progressive side of their repertoire, for every grim black metal section there's usually a soaring lead, melodic passage, hazy atmospheric or staccato riffing awaiting around the corner to add some real maturity to proceedings.  With so much on offer it would be easy to think you may get lost on this record but as already mentioned there was some serious thought put into the arrangement and structure of Below the Lights and as such nothing ever really feels out of place.  There's a need for every brick in the wall on all the structures Enslaved create here, they all add something to the overall album.

Alongside catchy songs like Havenless there's still raging torrents like Ridicule Swarm.  Big numbers like album closer A Darker Place meanwhile, explore all manner of styles, pace and tempo, from rabid, blackened verses to ever building layers of progression and soaring arena rock leads.  It is just impossible to fail to be entertained by this album.  Never low on energy or ideas it weaves a complex yet accessible tapestry full of obvious influences that instead of coming across as opposing or challenging end up feeling like a perfect marriage.

The title to the album always fascinated me as it is superbly brought to life in the content of the music.  To quote Ivar Bjørnson from an interview in 2003 "the lights are where everything's acted out, but it's all made below... Like nice green grass and flowers - the stuff going on below... worms, dead leaves, dead bugs, dead animals, everything shift-shaping and growing into new stuff all the time".

Enslaved is an early starter in the scene forming in 1991 amidst the Black Metal revolution in Norway. Now I haven't heard any of their earlier stuff, only later. These guys definitely stand out to that sound. At least on this record, it does not sound like a Norwegian Black Metal band from then. This album did release in 2003, and my late 90's- early 00's black metal is a weak game and I know that many of the older acts who release during this time also had some weaker albums. This is not a bad album but I won't be coming back to this. This is too avant-garde, or progressive, for a black metal mood and it's too black metal for a progressive metal mood for me.

For a black metal album, this is way too cleanly produced. I miss the time of old when the records were made in a cold dirty basement with sub-par equipment. At this point, they're so glossy and overproduced the instrumentation is so clean at times I wonder if it was done by a computer. Listening to this as I write, Queen Of Night, begins and it feels like Opeth or another folk/prog metal band. I'm into it, but then the black metal screams come in with completely different battling instrumentation going on in the background. I hear a lead guitar giving a solo while a rhythm guitar is giving a really cool progressive melody that eventually becomes repetitive and grading. And now an almost Depeche Mode like gloomy singing. Then back to fast beating guitars with the black metal vocals. This is a perfect song to talk about this album really, as it's all over the place and I am not a fan.

It's like a mash up of 3 or 4 good songs being played at once, if I focus one aspect at a time I enjoy it quite a bit. They're vocals keep me involved, the guitar work is super fun, the drums are driving, but together they don't feel like they belong. I would give this album an even worse rating, but I feel there is still talent and worth listening to. I can imagine there are those that find this to be one of the best, but for me it's talent wasted on overproduction and bad songwriting.