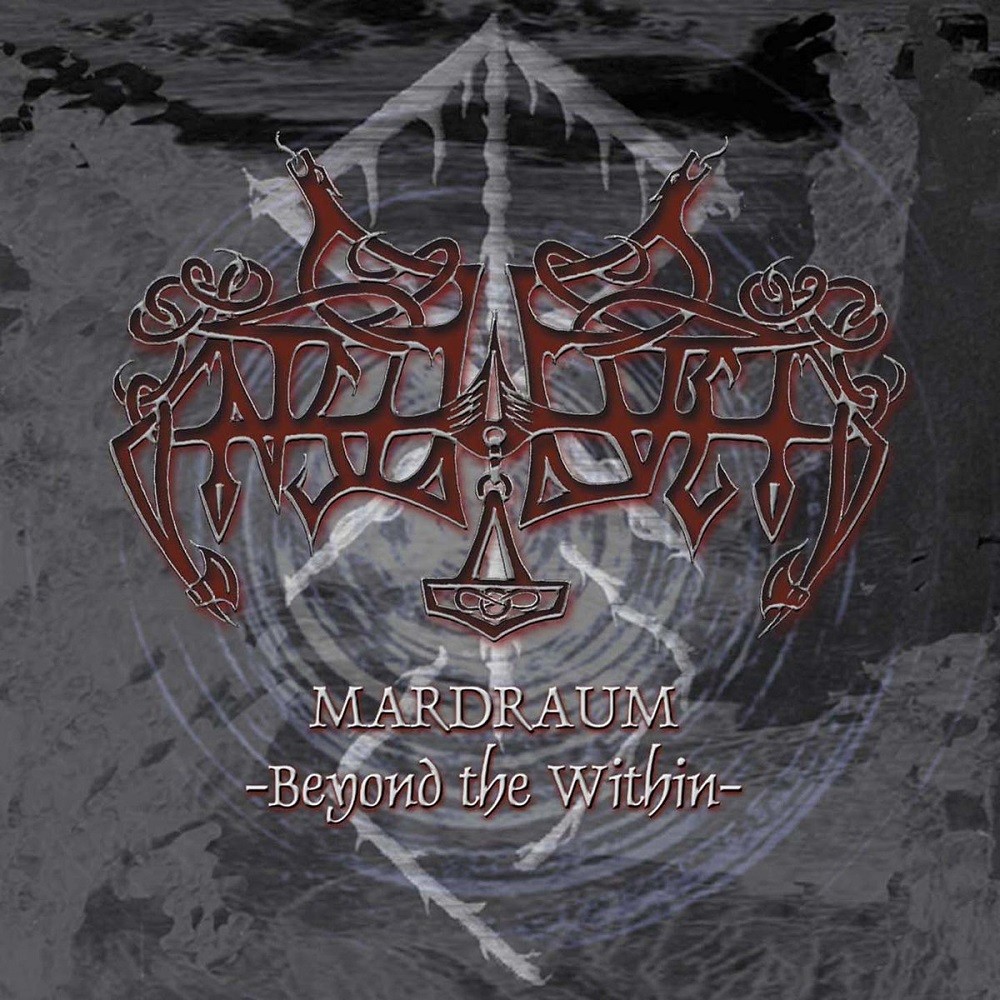 It wouldn't be until Isa when Enslaved has finally been put into an exciting position in the extreme progressive metal scene. However, a lot happened in the few years leading up to that album's release. Probably the first time many people have heard of Enslaved outside the Norwegian black metal underground is when Below the Lights came out, but with that new diverse progressive style, where did it began? Monumension might not come to mind as the turning point, being stuck in the overlooked middle of shame, before the actual turn of popularity, but after the promising beginning of a new era...

That beginning is Mardraum - Beyond the Within, described as nothing other than an ultimate change in style! The album title hints at the idea of leaving the reality of Viking battles into the obscure astral plane of dimensional transcendence and spiritual energy. It is also both the last of Enslaved's initial Scandinavian title run and their first English title, along with being the last album with Scandinavian lyrics in almost every song. Now just because their style has changed, does that mean they're entirely giving up on their 90s Viking/black metal routes? NO. While the album is more experimental in its territory, the extreme metal influences are still present, both its roots and new elements of other extreme genres, hence the label "extreme progressive metal".

The tense yet hypnotic opening epic "Større Enn Tid – Tyngre Enn Natt" (Greater Than Time – Heavier Than Night) starts this new progressive era as intended with constant changes in tempo plus excellent guitar solos played by the one and only Ivar Bjørnson. Despite these drastic additions, the listeners can still hear what they expected from the band, and the track is an instant memorable classic, hours after it was heard by the public for the first time upon release. The aggressive fast pace of their earlier material goes on in "Daudningekvida" (Deadhymn) in hatred and chaos. Instant highlight "Entrance-Escape" (Inngang-Flukt) is the band's first song (and only one in the album) to be sung in English. It begins with hypnotic guitar that becomes more sinister throughout its 7-minute runtime of black-ish experimental metal that never bores listeners. One moment there's fast guitar rampage, and the next is acoustic melancholy to prove that Enslaved is now a band of their own, never to be imitated.

"Ormgard" (The Hive) is another black metal menace fused with progressive care. "Æges Draum" (Aege's Dream) is more of a blackened death metal song, beginning with an angry groove to remind some of Morbid Angel, before a deathly assault. Then inexplicably slightly after that first minute, the violent riffs slow down into crashing chords as Grutle Kjellson does heroic speaking. As if the drama hasn't stopped, there's an odd clean guitar melody. Then the chaos rises again before letting waves of melody and hit you from above before leaving you knocked out in the sand, waiting for what's next. The title track is where the vocal effects are most evident, with screaming and creepy narrative brilliantly being part of the concept of psychological unconsciousness as you're being pulled into a nightmarish void with the haunting sounds and guitar. That's quite some hard work put into this album you gotta appreciate! "Det Endelege Riket" (The Finite Empire) has insane essence of their earlier raw black metal, and although the production might sound fuzzy, it's still a good tribute to their past.

"Ormgard II - Kvalt I Kysk Høgsong" (The Hive II - Strangled by purity) continues the well-crafted brutality of its "prequel", though not as accessible or directive as the track before "The Hive II". I totally like the epic-sounding "Krigaren eg Ikkje Kjende" (Warrior Unknown), especially the soaring vocals in the bridge. The harrowing "Stjerneheimen (Starhome)" follows with the band's most furious riffing with thrashy passion. The soothing "Frøyas Smykke" (Freya's Necklace) ends the haunting journey in a mystical way.

It's a shame that I didn't start my Enslaved journey with this album or Monumension. I probably would've liked them more than the perfect progressive pair, Below the Lights and Isa. Either way, Mardraum has mixed the band's usual aggression with their later experimentation in a decent flawless manner, leading to how Enslaved sounds today!

3.4
Band
Enslaved
Release
Mardraum: Beyond the Within
Year
2000
Format
Album