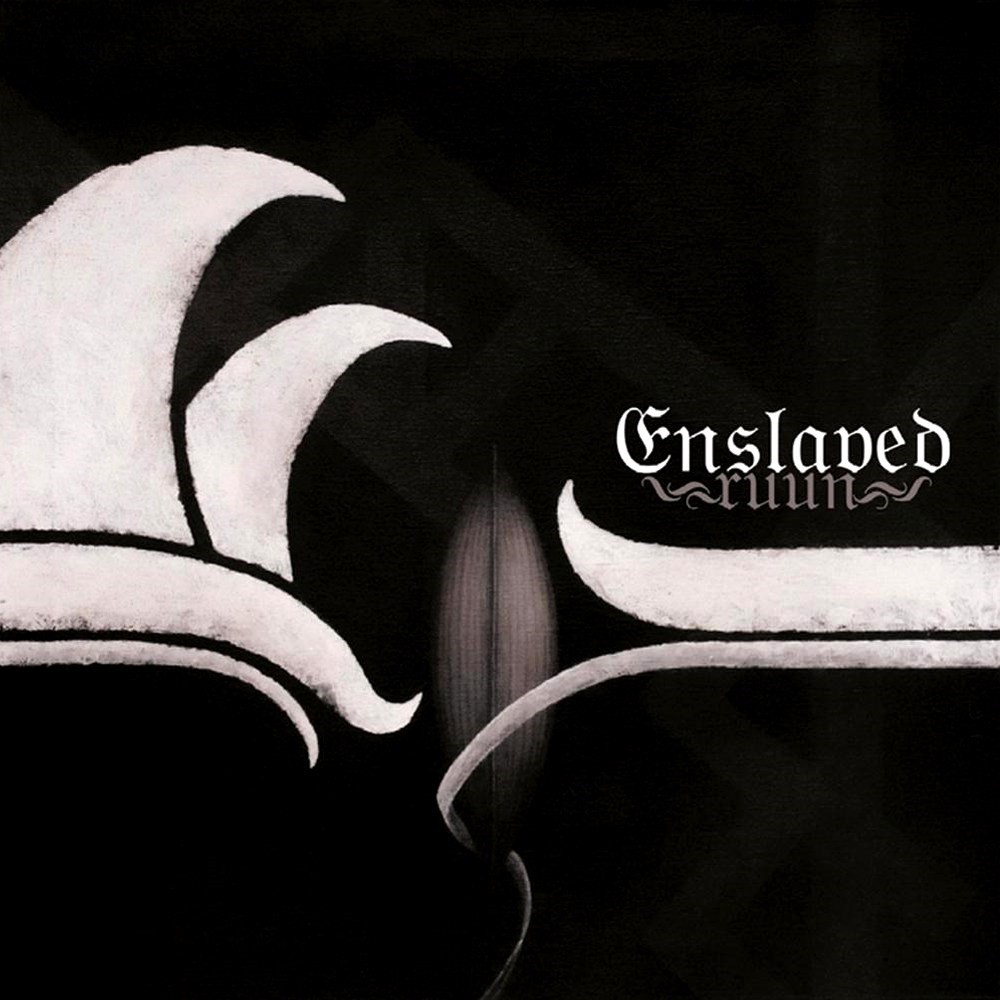 After the successful Below the Lights and the perfect melodic Isa, Enslaved reached the point where they could go one of three different directions; step back into their harsh technical black/Viking metal roots, forge an entirely new sound, or push forward their progressive style into somewhat alternative territory. They took that third direction with Ruun! It was a divisive choice turning away earlier fans and bringing in new ones. Ruun didn't break as much ground as their previous albums, but it's still almost as good.

The production is similar to Isa, but cleaner and louder. There's also subtle change in the overall tone. While their previous album was more melancholic, Ruun wipes away the sadness with anger. The guitars have heavier chords and more grinding riff structures.

The beginning trilogy of songs is the most exciting here, starting with "Entroper", where the intro has small string layers before surging into a spacey riff that is like Pain of Salvation is a Foo Fighters-like pace. Then the usual black metal shrieks arrive. The song picks up in the bridge where the guitars are punctuated by ambient background and jazzy bass. "Path to Vanir" has the best riffs in the verses, mid-paced but filled with mysterious majesty, reaching back into their earlier history of cold mythology. The f***ing immense chorus is where Ivar and Ice play their thick tremolos, while the ominous harsh vocals range from screams to growls, stretched over organ tones. Some of the best moments here! I also enjoy the calm folky midsection. "Fusion of Sense and Earth" is a wonderful highlight with the sad organs from the previous two albums. The guitars ranging from heavy to soothing, continuing the devil vs. angel battle of Monumension, the heavy side including harsh tremolos harkening back to their first 5 albums. I'm telling you, that's the band's best fusion of album styles yet!

The vocals that mix melodic zen with vile contempt are best exemplified in the title track. "Tides of Chaos" also has that vocal mix. While the vocals sound closer to Tool vocalist Maynard James Keenan, which kinda helps with the guitar's somewhat obvious similarities to that band at that time, the demonic harsh vocals continue making Enslaved what they really are. Oh the theatrical enjoyment!

"Essence" has mournful vocals. The memorable "Api-Vat" has superb riffs. However, the melodic doomy closer "Heir to the Cosmic Seed" does not deliver what it promised and just wipes out the perfect score this album would've had, ending the band's perfect album streak at two.

Even while listening and typing my review, new things to enjoy about Ruun keep appearing. Almost every song has its potential of reaching my "favorite" half of the album, but I often wonder which of those first 7 songs would actually make it there. The one song I don't care for is that last track. My ultimate "favorite half" can be seen below. Please keep up the progressive triumph, guys!