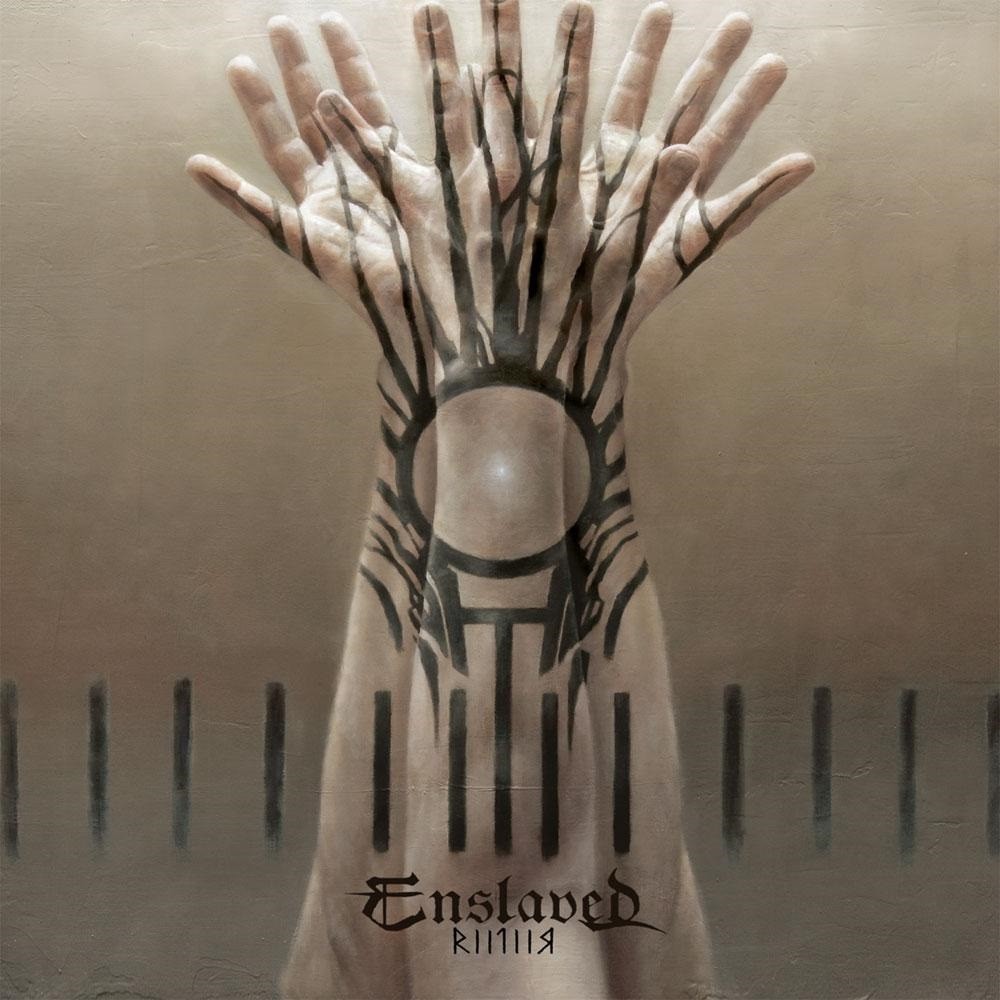 I'm definitely not the greatest fan of black metal, that's why it wasn't until recently when I started fully listening to Enslaved. While my full interest started via a song from Isa, there were a couple other attempts that didn't pay off; a song from this album RIITIIR, and last year a review for their previous album Axioma Ethica Odini. Now I understand all the praise and criticism the band has received and I'm glad that I finally got around to them as one of my favorite bands. Trying this album again, RIITIIR has very well become my #1 favorite album of 2012, of all the 50-something albums of that year I've owned throughout my metal history! Where do I begin?...

There's a h*ll of a lot of dynamic range from atmospheric majesty to black metal throwbacks as early as their second album Frost. There are so many different layers of different elements from different styles in different songs. You get to witness progressive rhythms and somber melodies of prog-metal bands like Opeth and Tool and the extremity of their Norwegian black metal peers Borknagar and Emperor, all in a tame yet sometimes harsh mainstream mix similar to extreme-turned-progressive metal bands Amorphis and Katatonia, yet being part of one stylistic blend, progressive black metal! Any fans of those bands would find something to love in this album. While earlier fans might not like the more accessible sound, the doorway is opened for new fans. It's been a great pleasure getting to an album that I think is one of the total best.

"Thoughts Like Hammers" is one of my favorites of the album, filled with intense pounding from Cato Bekkevold who perfectly complements the music foundation. "Death in the Eyes of Dawn" is a great example of everything in this album, along with mixing softer vocal segments similar to Devin Townsend Project at that time with the heavier doom of Swallow the Sun. "Veilburner" has grand rhythms and mighty leads, the latter especially in the soloing.

The roaring "Roots of the Mountain" is the song from this album that was in the September 2020 Infinite clan playlist that I thought would get me interested in this band but didn't. Now it's still amazing! That one flashbacks to the slightly earlier era of Isa and Ruun, reveling from verse to bridge to chorus in smooth ongoing transition. That song definitely fits well on tour! More of the intense drumming goes on, and you can definitely hear everything you can find from the black metal intro of relentless riffing to the acoustic outro of tender tremolo. The title track continues the great blend of everything.

"Materal" doesn't focus a lot on the aggression of their earlier material, but has a ton of dual vocals, keyboard effects, and guitar melodies. The bass tone gone to overdrive can be in the intro of "Storm of Memories". But the strongest piece of them all is the 11-minute "Forsaken". Soft piano is mixed with extreme guitars for an Opeth-esque epic.

Overall, I say RIITIIR is a must-hear from these progressive black metal legends. While this wasn't my total starting place to fully listening to this band (but it came close), it certainly can be for anyone unfamiliar with Enslaved despite the nature being toned down. Whether a grower or a hitter, all that matters is this album being one of the most enjoyable experiences to check out. Trust me, you'll love it!

Favorites: "Thoughts Like Hammers", "Death in the Eyes of Dawn", "Roots of the Mountain", "Forsaken"