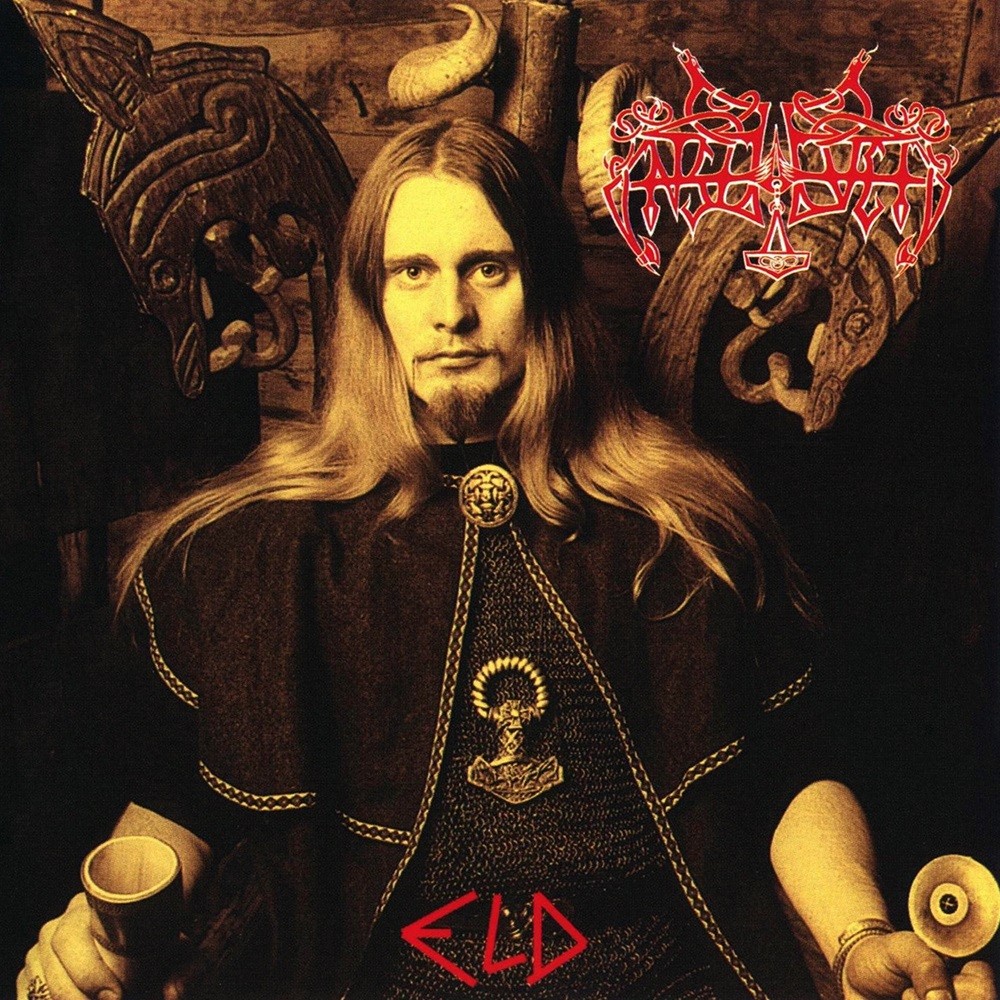 Up to this point, Enslaved had already released two albums (in the same year), both in a Viking-spirited black metal style but each having different contrasts of song lengths. Almost all songs in the former exceed 10 minutes, while in the latter, every song is shorter than that length. For this album, Eld (Fire)... Well once again it would follow a song length theme that would inspire Opeth, with this album being Enslaved's own Still Life.

Eld begins to hint slightly further into the matured progressive sound that would shape up their future albums (7 tracks in an hour, again like Still Life). There are more clean vocals while maintaining the black metal shrieking. The songs are more relaxed than their first two albums, but the brutality is still present.

First track of the album, "793 (Slaget om Lindisfarne)" (The Battle of Lindisfarne), and already we witness the band's longest song, a 16-minute epic! It begins with chilling horns alongside pleasant choirs for the first 3 minutes, reminding me of a song from the Old School RuneScape soundtrack. More layers are added in then fade out. Clean guitars come in then quickly explode into distortion and drums for the real beginning of heaviness. Grutle Kjellson (the young Viking man in the album cover) does calm low singing. Sounds nice but the echoes aren't really increasing the greatness factor, though the song is already great. Right in the middle, over the 8-minute mark, the mood changes into brutal fast drumming. The start of that section is the only time Kjellson screams in this entire song. After that brutal section, it suddenly switches to a great mellow section. Then it's back to the verses with clean vocals for a chilly atmosphere. And finally the brutal section returns for the ending that stops for a mellow ending. Despite those vocal echoes, the vocals are still beautiful and, together with the awesome riffs, make this epic an outstanding varied track!

The rest is good while not reaching that level of awesomeness, beginning with "Hordalendingen" (The Man from Hordaland). This one starts with powerful chords and a catchy riff before the drums comes in along with more variety for the guitar. Then the song become faster and the drumming gets intense with the black metal shrieking appearing for the first time in this album during the verses while having a clean chorus. Pretty great track with many nice breaks in moods. "Alfablot" (Sacrifice to the Elves) once again has epic Viking imagery during the clean vocals. "Kvasirs Blod" (The Blood of Kvasir) builds up on vocals as Grutle raises his voice to the Nordic Gods.

"For Lenge Siden" (A Long Time Ago) begins with spoken narration in a foreign Scandinavian language. The lyrics tell a story of a Viking battalion on the quest for revenge against the killers of their ancestors. Then we have the angry "Glemt" (Forgotten) with Enslaved's trademark riffing and vocals so consistently powerful. Finally ending the album is the title track. This is where the vocals and atmosphere command the destruction from the music and lyrics for an incredible finish to the album.

All in all, Eld is an enjoyable slight step from Frost. Most tracks are performed well. The Viking metal roots and atmosphere of Enslaved have more creative ambition thanks to the progressive variety. If you enjoy atmospheric black/Viking metal fan, you should get this. Otherwise, it would be like what I thought of this band, a different discovery....