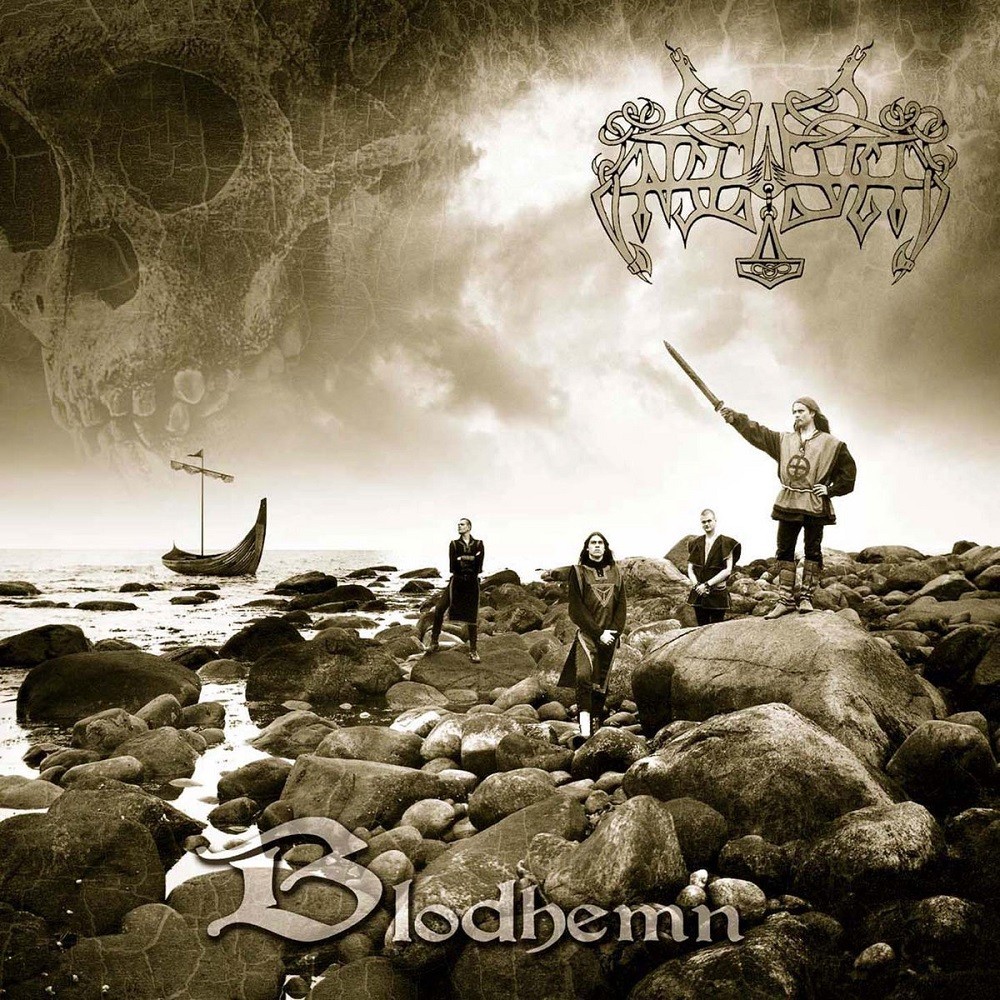 Much more than Enslaved's previous albums, Blodhemn (Blood Revenge) has the intention of b***h-slapping listeners' faces until they start spitting blood, with no regrets! There's quite a stylistic turn from Eld while keeping black metal as its primary genre. Sure a few folkish elements remain including the clean vocals that stronger and more somber than ever, and there's a touch of the prog direction that would start in the next album, but you'll end up in 40 minutes of heavy hammers smacking you in the jaw with what may be their most metal record yet.

Part of this new era has stemmed from new members drummer Dirge Rep (Per Husebø) and guitarist Richard Kronheim. Rep already had his own extreme rep in the first two Gehenna albums (or their first 3 "Spells"), and it's great that the two Enslaved founders Grutle Kjellson and Ivar Bjørnson allowed him to use his potential in this album. His thundering blasts speed through like if a sea plane is caught in a sea storm without ever being repetitive. Kronheim helped change the guitar tone. Louder riffs are more fully used than in previous albums, much more than the synthesizer background here. Blodhemn focuses on blazing aggression, yet there's some lightness in the strength that is also not too prominent in their earlier release as well. There are also accessible rock-ish leads.

"Audhumla; Birth of the Worlds" is a searing synth intro hinting at their prog direction. Then the memorable "I Lenker Til Ragnarok" (In Chains Until Ragnarok) shows their epic fury that would inspire countless Viking/black metal bands to come after Enslaved. "Urtical Gods" is also memorable but has far more of their savage side with f***ing lethal groove verses and punk-ish chords for a blackened thrash atmosphere for the Vikings to wipe out their enemies.

"Ansuz Astral" is also good though not as much of a standout as the previous two tracks, and one I would probably skip if I could. Then we head to my second favorite (behind "I Lenker Til Ragnarok") of the album, "Nidingaslakt". This is probably one of the shortest black metal songs and the second-shortest non-interlude song by Enslaved (behind "Urtical Gods"). The song is incredible, so it's never a waste of time. The guitar riffs are perfect along with excellent chanting. "Eit Auga Til Mimir" (An Eye for Mimir) starts furious before the guitar gets slower with melodic chanting. The one-minute ending section begins with a war horn before the intense chaos of the intro.

The title track has wild consistency. Then there's "Brisinghamen" with dense melodic chords of epic momentum. It's as short as two other highlights, shorter than Frost's songs even! And finally, the eclectic closer "Suttungs mjød" (Suttung's Mead) consists of Grutle's clean vocal layers in a yawning intro before an engaging sludge finale.

Blodhemn has monolithic production with the vocals louder and bolder than before, and the guitars in tidal surge patterns. This is probably their most massive studio production until Axioma Ethica Odini which also has just 4-star quality. However, fans of the more progressive 21st Century Enslaved might not find Blodhemn interesting. While there's less writing range, their kick-A sound makes this album as unique as others for a heavy battle....