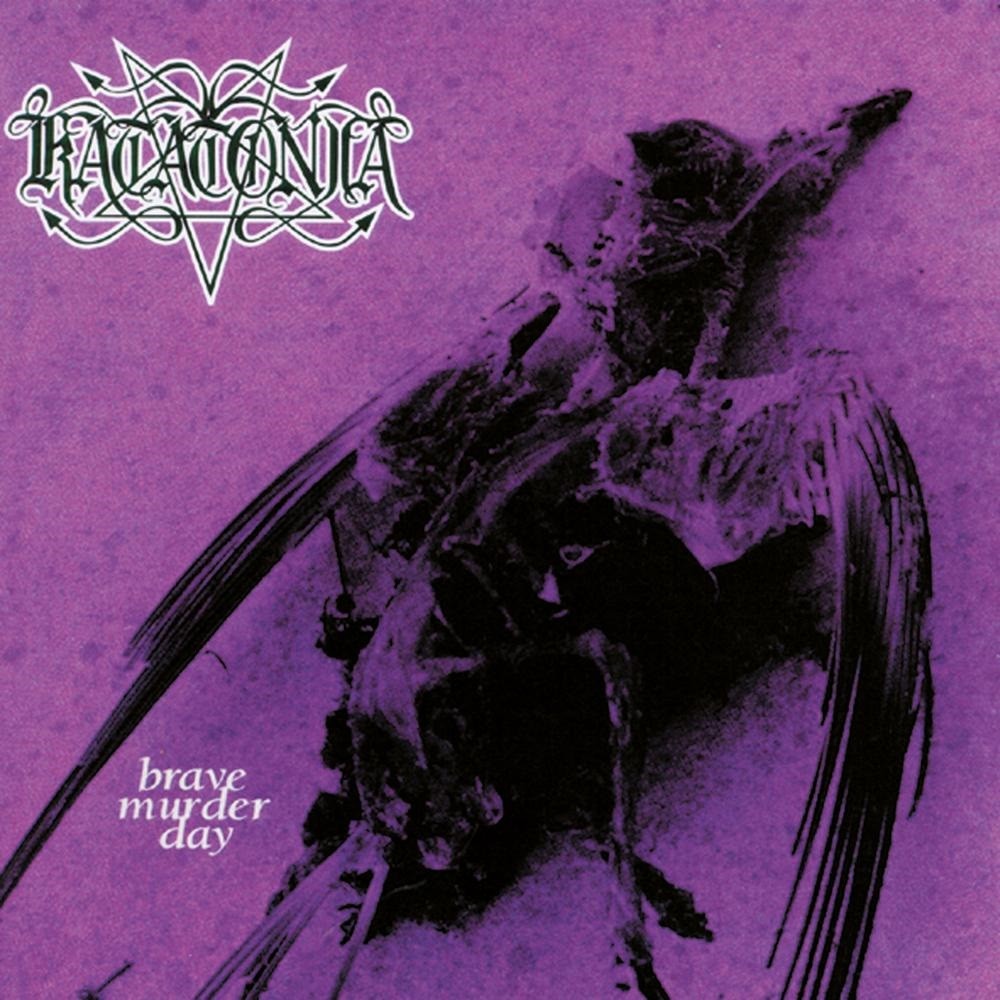 Hypnotic genius that would change the perception of death doom metal. Essential!

It’s always difficult to write a review for a favourite album. Expressing how much music means to you in words can be a daunting prospect, as the thought of not doing an album justice weighs heavily on the mind whenever attempting it. Brave Murder Day is such an album for me and I hope that I manage to convey my adoration for it over the next few paragraphs. These Swedes had already impressed me greatly by the time I came across this treasure, with their debut full length album Dance of December Souls and the following For Funerals to Come EP both containing hauntingly atmospheric death doom metal, with fantastic melodies and passion-filled vocals. However, as much as I found their music to be moving and entertaining, there’s no doubt that it displayed some signs of immaturity, with less than tight musicianship on occasion and room for improvement in the way their tracks were structured. Taking all this into account, I figured Katatonia would be all the better for the experience, and that their next album would in all likelihood overcome these awkward moments and deliver something very special indeed. Little did I know that this next album would come very close to never eventuating at all, and how dramatically different it would be once it finally did.

After the success of Dance of December Souls, Renkse and Blackheim were not only struggling to find a stable line-up, but they were also finding it difficult to decide exactly where to take their sound. They had toyed with the idea of performing gothic rock with the Scarlet Heavens recording (eventually appearing on a split vinyl with Primordial) before ditching the idea and reverting back to their original sound. This indecision appears to have come to a head after the For Funerals to Come session in 1994, which led to these long term friends putting Katatonia on hold for an indefinite period of time. Blackheim used the sabbatical to explore other genres of metal, putting his energy into the black metal carnival that is Diabolical Masquerade (creating the amazing Ravendusk in My Heart in the process), and also taking part in a thrash metal band called Bewitched. Renkse on the other hand combined with Fredrik Norrman to form October Tide, recording Rain Without End before the end of 1995. It has to be said that October Tide’s debut album, which wouldn’t be officially released until 1997, is where the Brave Murder Day sound was really established, and one has to wonder whether Katatonia would have gone down this path at all had this short hiatus not taken place.

In early 1996, the duo reformed Katatonia and significantly brought Norrman into the fold. There was however one more issue they needed to deal with before getting down to business. Jonas could no longer perform the harsh vocals he was known for due to the extensive damage it was doing to his throat. They’d have to find a replacement vocalist and what better place to look than amongst your own country mates. In steps Mikael Åkerfeldt from Opeth fame. While the man may receive criticism from a growing number of Opeth bashers (as is the case with anything popular it seems), there’s just no doubt in my mind that Mikael is one of the finest vocalists in metal. His performance on Brave Murder Day may not demonstrate the extent of his capabilities, but the controlled anger and melancholy he brings suits the musical themes perfectly. Blackheim and Fredrik produce multitudes of sumptuous melodies throughout, but the other technique that they utilise to achieve their goal is repetition. These tracks have such a calming, hypnotic effect on the listener, despite the extreme despondency that this sound conveys. The album has influenced so many other bands (not least of all Finnish band Rapture) and changed the perception of what doom death metal is capable of. After all, there’s nothing romantic or gothic about Brave Murder Day. It’s mid paced, droning and raw!

Brave Murder Day’s title is taken directly from the first three tracks on the album, but there are six tracks in all totalling just over forty minutes. The first of these (Brave obviously) is the best of the lot in my opinion, being a ten minute classic built around constant rhythmic riffs and Mikael’s grief-stricken vocals. Murder, Rainroom and closer Endtime come awfully close to matching Brave and are all brilliant, but their lesser running times don’t quite allow them the room to outshine it. 12 stands out as having a slightly different structure to the rest, which isn’t surprising considering it’s actually a reworking of an earlier Katatonia track called Black Erotica, originally recorded for the W.A.R. Compilation Volume 1 for Wrong Again Records in 1995. There’s no question that it’s third track Day that causes the most controversy amongst fans of the band. This depressing little “ballad” was the first track to contain entirely clean vocals from Renkse and many consider his performance here to be a bit weak, despite the fact that he would take over full time clean vocals on all albums from this point onwards. While I agree that he would go from strength to strength with each subsequent album, I still think this track gives the album a much needed shift in intensity and his emotional, vulnerable style only adds to the melancholy.

One of the other things of note when discussing Brave Murder Day is that the album was originally released completely un-mastered. Why this happened is anyone’s guess (perhaps the band felt no need to tinker with the result) but it wasn’t until 2006 that Peaceville would re-release the album in mastered form for the very first time. I haven’t heard this updated version, but to be honest, I see no need to. The production on the original has nothing of note that needs adjusting and the organic sound of the instruments works in its favour rather than against it. The thing that does make the Peaceville release appealing is that it also includes the fantastic EP Sounds of Decay. This three track EP contains the only other material recorded with this line-up and therefore sits perfectly alongside Brave Murder Day, unlike the For Funerals to Come EP which is included on the Century Media version. That being said, both of these EPs can be found on the Brave Yester Days compilation (along with stacks of other rare and unreleased material), so there’s no real reason in my mind to upgrade from the original pressing of this classic album. In the end, Brave Murder Day is an album that all fans of depressive metal should own, regardless of which version you choose. It’s an album I can never get sick of and is thoroughly deserving of five stars.

One of the great things about Death Doom/Gothic Metal is how it incorporates atmosphere and texture into the music; not to overshadow the songwriting, but to compliment it. This is what allows for the stellar albums by artists such as My Dying Bride, Paradise Lost, Swallow the Sun, etc. to resonate with such frequency for me. Meanwhile, the earliest Katatonia records that incorporated this sound may have some nice texture and the songs lure the listener into a trance, but nothing about the individual songs stand out. In fact, I find Brave Murder Day to be a monotonous album.

The album kicks off with a ten minute opener, "Brave" that sees the group embark on a ten minute dirge that is devoid of structure or form. The use of one riff unaltered and unedited throughout the duration is mind numbing. And while it sounds nice from a production point of view, there is no good reason for me to traverse further into the song. This songwriting technique persists into the next song "Murder" as well as "Rainroom" and for the life of me, I couldn't tell you the distinguishing features between these two tracks. These two songs are broken up by the slower and cleaner "Day", which is a good change of pace, but it follows in step with the others with its songwriting technique. It feels too much like Katatonia took composition lessons from Drone Metal.

"12" actually has a form to it and does not sound like it is just borrowing the same riff from the previous four tracks, making it a standout. The closer "Endtime" starts with promise, but eventually just modulates back into same tempo/riff/melody that I've already heard far too much of for a relatively brief forty minute album.

In the end, I liken Brave Murder Day to a modern day Harakari for the Sky album. These albums are loaded with texture and atmosphere and they sound beautiful, but the songwriting is so painfully lacking in any development or structure that my attempts to latch on to any melody or groove is gutted when the artist refuse to do anything with them. I found that, following this album and the band began ditching the Death Metal adjacent tones for more Alternative rock, while still maintaining their Doom/Gothic aura, it opened up many more opportunities for them as songwriters. I for one am glad, alongside Within Temptation, that they dropped this sound as quickly as they did.

I must admit to having a troubled relationship with Sweden's Katatonia as they don't always "click" with me, albums such as Last Fair Deal Gone Down leaving me cold. However, this is a whole different animal altogether and, for me, Katatonia's best - a situation vastly improved by the addition of Opeth's Mikael Akerfeldt who's harsh vocals are second to none, for my money.
Kicking off with the ten-minute titan, Brave, a heaving death doom monster, Brave Murder Day is mostly comprised of uptempo death doom, Akerfeldt's growling, yet morbid vocals, fantastic, memorable riffs and soaring lead work. Slightly different in structure is 12, a song with a bit more of a progressive feel to it with changes in tone and texture throughout it's eight minute running time.
The real cuckoo in the nest of the album is obviously third track, Day, who's synthpop sensibilities stand out like a sore thumb (I have no problem with synthpop at all, but this song jars here).
Overall a strong example of second-wave death doom from a band who ultimately would feel the need to turn their back on the style and strike out for pastures new, consequently never really being this good again.