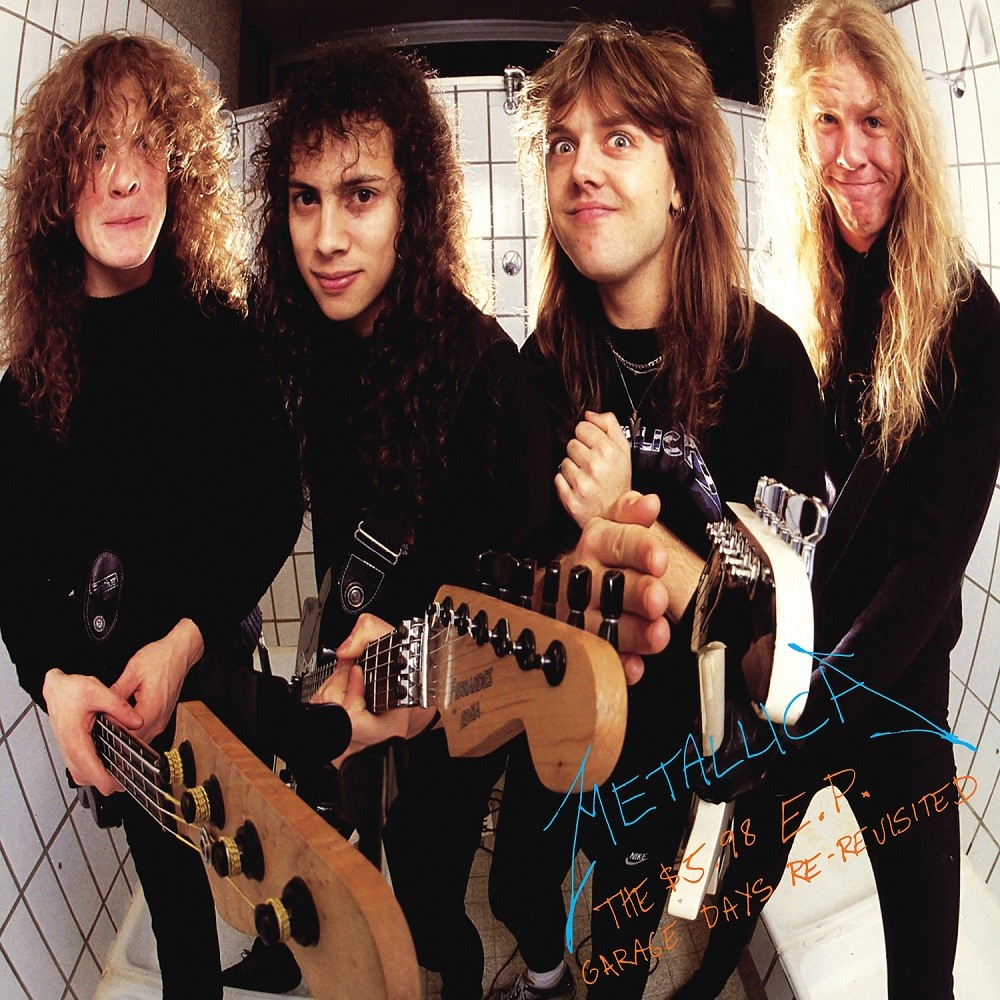 Really fun all-cover EP that displays Metallica's influences while giving their own fans something to smile about.

After the tragic death of bassist Cliff Burton, there was some discussion between the remaining members that perhaps Metallica should also be put to rest. Eventually it was agreed that Cliff would never have thrown in the towel and would want Metallica to continue in his absence. It was agreed, after an intense period of mourning, to begin what would turn out to be a very long search for a replacement. Around forty bassists auditioned, including Hammett’s childhood friend Les Claypool from Primus, Troy Gregory from Prong, and Jason Newsted from Flotsam and Jetsam. As strange as it may seem, Claypool was apparently rejected for the simple reason that he was too good, but I can only assume there was more behind the decision than we’re led to believe. The band were very impressed with how prepared Newsted was, having learnt Metallica’s entire set list, and it was decided he would be the one to fill the enormous shoes of Cliff Burton. The band wasted no time and began touring immediately with the new line-up clicking nicely. On their return they set about recording an EP of covers to test out both their new recording studio and their new bassist. The EP was to be named The $5.98 EP: Garage Days Re-Revisited and would contain covers of some the NWOBHM and hardcore songs that had inspired the members of Metallica, and which the guys had rehearsed in Lars Ulrich’s garage.

I generally despise the use of cover songs within full length studio albums. Unless they fit tightly within the tone and themes of the album, they often merely distract and detract from the flow of the album (Megadeth had a bad habit of doing this on their early releases). I’ve always thought they should be limited to bonus tracks, compilations and EPs, which is why I have no issue at all with Garage Days Re-Revisited. Besides, not only are the tracks they chose really entertaining, but everything Metallica touched at this stage immediately turned to gold. It’s not surprising to find a Diamond Head track opening proceedings with Metallica consistently listing the British heavy metal band as one of their biggest influences. Helpless is one of the many Diamond Head tracks that Metallica have covered over the years with Am I Evil? being the first official one when it appeared on the Creeping Death EP in 1983. It’s a good, fist pumping track and it’s not hard to hear how songs like this helped develop the early Metallica sound. Second track The Small Hours was originally performed by Scottish progressive heavy metal band Holocaust. Its purposeful beats and slow heavy riffs gave Newsted a chance to be heard and while the basic structure is much simpler than something Metallica would produce at this stage, it’s a cool track with a haunting tone and has a great breakout lead section in the middle.

The third track was found on the majority of pressings, but it was omitted from the UK version due to local music industry laws regarding the maximum length of EPs. It’s a shame that anyone out there might have a copy that lacks The Wait, as it’s probably the highlight of the release. Killing Joke’s post-punk and industrial edge influenced innumerable bands from Nirvana to Napalm Death. It’s Newsted that really shines in this cranking track, laying down a variety of cool bass grooves, but Hetfield’s digitally effected vocals and long held chorus line are also perfectly executed. The wonderfully titled Crash Course in Brain Surgery was originally by pioneering early metal band Budgie way back in 1971. Once again from England, along with Black Sabbath, they really helped get metal off the ground and Metallica do justice to their influence with yet another enjoyable rocking cover. Garage Days Re-Revisited finishes with Last Caress/Green Hell, which is two separate tracks by American hardcore punk band The Misfits pasted together. It probably should stand out as the weak point of the release, but the lyrics are so distasteful and it’s performed with such vigour that it can’t help raising a smile. Any fan of Metallica should track this EP down, if only to hear some of the music that inspired them to pick up their instruments. You’re unlikely to find it for the $5.98 that’s listed on the cover so I suggest purchasing the Garage Inc. compilation that contains the entire EP plus stacks of other rare and unreleased material.

Having barely mourned the loss of bassist Cliff Burton after his sudden and tragic death, Metallica were back in the studio, breaking in newcomer Jason Newsted with this short collection of covers.

'The $5.98 EP: Garage Days Re-Revisited' (bit of a mouthful, that) is a nice little E.P. that shows that even at a young age, Metallica were always good at doing cover versions, although the song choices themselves are quite obscure and certainly not the most exciting. I mean, let's be honest, how many people can honestly say they were Diamond Head fans or Holocaust fans before Metallica covered them?

With that said, the band are on point here, and although this release was mostly meant for fun, it still shows a band full of ambition and enthusiasm. With production that, whilst sounding rough in places, fits the music perfectly and gives just the right amount of punch and grittiness.

Any praise or criticisms aside, there's really no point in tracking this down these days. I say this because all five songs offered here appear on the 'Garage Inc.' album, a compilation of newly recorded and every previously released cover Metallica have done. And unless you're a collector looking to own everything, you're better off just getting that.

To be honest I find it a little difficult to provide an unbiased review of this release as it was the very first thrash metal CD I ever purchased & I have quite a strong emotional attachment to it. Regardless, I don't think I'm out of line in feeling that it's an essential part of any Metallica fan's collection. I'm not generally much of a fan of the cover version. They're so rarely executed in a way that offers something fresh & new but also does the original version justice. However I'm very pleased to say that this EP is one of the few exceptions. In fact I'd probably say I enjoy it more than anything Metallica have released since the 80's.

The first two tracks are absolute rippers. Opener "Helpless" is a pretty faithful rendition of Diamond Head's original but done in a more thrashy & exciting style that I actually prefer. It wouldn't be out of place on an album like "Kill 'Em All" to be honest. "Helpless" is followed by a reworking of Holocaust's "The Small Hours" which is the highlight of the EP in my opinion. It has an eerie atmosphere that sounds new to Metallica but also sounds quite natural. The original was only ever released on an obscure live album so this one might as well be Metallica's own. The cover of Killing Joke's "The Wait" wasn't included on some versions of the EP but it was on mine. Lucky for me really as it's a very solid & much more metal version that easily tops the original. I probably prefer Budgie's version of "Crash Course In Brain Surgery" but that's not a huge criticism. Metallica's effort provides a totally different perspective on the original that in retrospect seemed to be crying out for a substantially heavier reworking. Closing track "Last Caress/Green Hell" is a combination of two old Misfits tracks. It's probably the weakest of the five songs included here but I still find it quite enjoyable. I comfortably prefer the "Last Caress" section to the Misfits original but the "Green Hell" section is almost identical to the Misfits song & offers little to improve it.

"The $5.98 E.P.: Garage Days Re-Revisited" may only be an EP of cover versions but it offers substantially more bang for buck than that term implies. It not only offers the listener an interesting & entertaining insight into Metallica's musical roots but it's also a damned fine piece of thrash metal. And there is the beauty of it. None of the original pieces would be regarded as thrash metal in any way yet Metallica have somehow managed to remain faithful to the essence of the originals whilst adding enough of their own sound to make the songs instantly identifiable as their own. A fine effort from a little EP that was only ever intended as a stop-gap between albums.