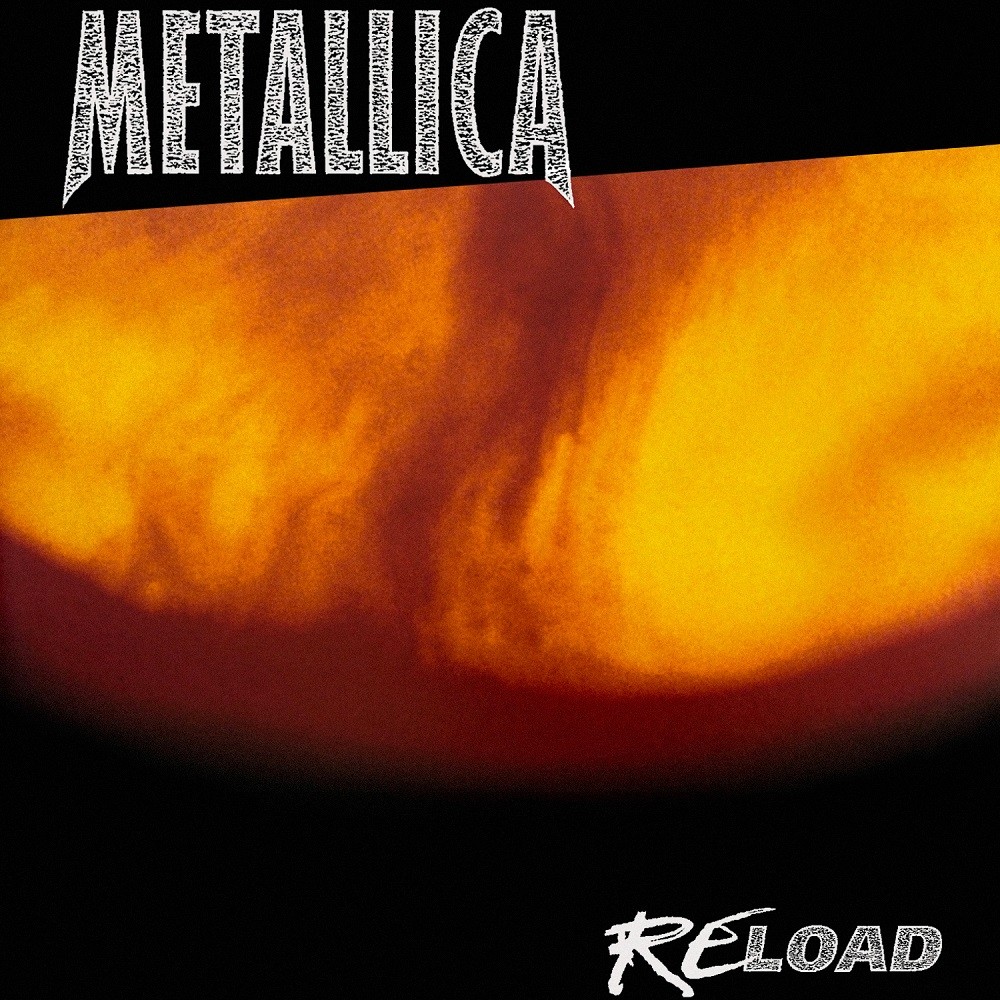 This album I've chosen as my next one to review because of both continuing to revisit bands from before my metal interest completely and to practice reviewing a heavy metal album before another one that is Riot's Thundersteel. I'm surprised that of all the Metallica albums I could've reviewed, the one I picked was one of their more controversial albums Reload! Eh, that's OK, I had quite a...history with one of the songs here.

This kind of controversy started with its slightly older recorded twin Load, due to a very different direction. Reload contains songs that were recorded in the Load sessions, but end up having their own album. However, it sounds like an album on its own because unlike its bluesy brother, Reload has more of a classic hard rock-inspired sound.

The first few songs are ones I don't think would make good highlights, except the first song "Fuel". This opening track is one of the best of the album, the fastest and heaviest of the bunch, before the album's hard rock downfall... "The Memory Remains" sounded great when I first heard it on the radio over 8 years ago, and I gave it a few listens since then, but now? That song's already starting to bore me, probably because it's a few times TOO F***ING MANY!! The melodic moaning by Marianne Faithfull is really annoying me now. I guess while there are some songs out there I like for historical value, one of them would have its appeal worn out so quickly. "Devil's Dance" is a groove track that is too repetitive. That one was played live in 1995 before it even made it to this album. "Unforgiven II" is a ballad known as part of the band's "Unforgiven" trilogy. It was also covered by my YouTube pen pal as one of his last videos before his indefinite hiatus. Unfortunately, there's nothing special about it. It's just classic hard rock, and did I mention it's A F***ING BALLAD!? Sorry, dude...

It's not until "Better Than You" when the album goes much better than those previous 3 tracks. This one is so d*mn good with a great chorus and excellent false ending. The vocals are in great aggression. "Slither" follows with nice midpaced riffing. "Carpe Diem Baby" is as great of a highlight as those previous two tracks, but in a more elaborate level. Seize the day!! "Bad Seed" is faster in the drums and bass and tuned down to drop D-flat, I believe. "Where the Wild Things Are" is good but not better enough, due to the structure being too intricate and complex for their standards.

"Prince Charming" is a total winner, having the best riffing in the entire album. Unfortunately, a couple more fillers come starting with "Low Man's Lyric". It's very repetitive, the violins are useless, and the lyrics are some of their lowest. "Attitude" is really bad, the worst of the album, despite heavy aggression. Please skip that one. "Fixxxer", however, is the perfect ending, with catchy riffs, and interesting bridge, and one of the best solos here. Sadly it can't reach the greatness of their signature song "Master of Puppets".

So in the end, Reload is a solid classic hard rock/metal album that is slightly good but of course never at the heights of their thrashier material. If you're into this album's kind of sound and its companion Load, then you'll surely like Reload. But if you prefer to go for all-out thrash, you've come to the right band but the wrong album....

After the huge disappointment that was Load, the news that Metallica would be releasing a second part entitled Reload didn’t exactly fill me with enthusiasm. The band had initially intended for Load to be a double album, but had decided in the studio that recording around thirty tracks at once was simply too demanding. They instead decided to release two separate albums one year apart, and Lars was adamant at the time that Reload should not be considered as a separate album at all, but merely the second half of Load. The idea of subjecting myself to more of the blues influenced hard rock that made Load so hard to swallow (sorry!) was about as exciting as viewing Lars and Kirk kissing in photos within the album sleeve, and I have to confess that I very intentionally steered well clear of Reload when it was released on November the 18th 1997. Hearing complaints that Reload held even less quality than Load and seeing it rated so horribly on sites like this one caused me no reason to regret that decision either, and James’ admission on the 2004 documentary Some Kind of Monster that the tracks on Reload were actually the ones Metallica considered too average to put on Load nailed that coffin closed for good...or so I thought. After reviewing Load a few weeks ago, curiosity started gnawing at me, and I finally resolved to give Reload the chance I denied it some thirteen years earlier.

I don’t know if going in with stupendously low expectations actually increased my enjoyment of Reload or whether it is actually not that bad, but I’ll state straight off that I don’t think Load Part II is really any worse than Part I. Don’t get me wrong, in comparison to the classic Metallica albums, Reload is entirely disastrous and has some particularly embarrassing moments for all involved. I have no urges to stand out on my veranda and proclaim to the world that Reload is a misunderstood gem that was simply mistreated due to some bandwagon jumping condemnation. But...after rating Load two and a half stars, I was fully convinced that Reload would sit somewhere significantly lower on the spectrum. After half a dozen listens I have to say that I’ve discovered just as many highs and lows on Reload than as on Load and will therefore rate it accordingly. The guys still show no intention of displaying their substantial talents and instead cruise in third or fourth gear for almost the entire seventy five minutes, seemingly playing for a southern American truckie bar audience as opposed to the long-haired, moshpit inhabiting crowd they owe their initial success to. The drug fuelled, abstract art loving, homosexually suggestive imagery was also retained, and even the cover art could be considered a sequel of sorts, with artist Serrano’s mixture of blood and piss following on from the blood and semen of Load.

So where are the positives? Well, as much as opener Fuel grates on my nerves and has me hoping no-one can actually hear me listening to it who might mistake me for a raving redneck, it at least gets the album off with a certain level of energy. The Unforgiven II might not be a patch on the original, containing that annoying southern twang that suddenly appeared in Metallica’s sound in recent times, but it’s not completely unpleasant. The real positives for me come mid-album, with Carpe Diem Baby overcoming that terrible name to be a surprisingly memorable and powerful track, and Where the Wild Things Are’s strangely touching and slightly progressive form completely taking me off guard. Eight minute closer Fixxxer is not too shabby either, making me think that with a little bit of tweaking, Metallica could have released an admittedly still disappointing, but not quite so staggeringly awful single album, made up of the better moments from Load and Reload. I might actually listen to an album containing Until it Sleeps, The Outlaw Torn, Carpe Diem Baby and Where the Wild Things Are, but I sure as hell won’t subject myself to over a hundred and fifty minutes of hugely inconsistent, second rate rock music just to get the occasional reminder of what this band was once capable of, particularly when it holds tracks as horrible as Cure, Ronnie, Better Than You and Low Man’s Lyric. At least I now know that I haven’t really been missing anything!