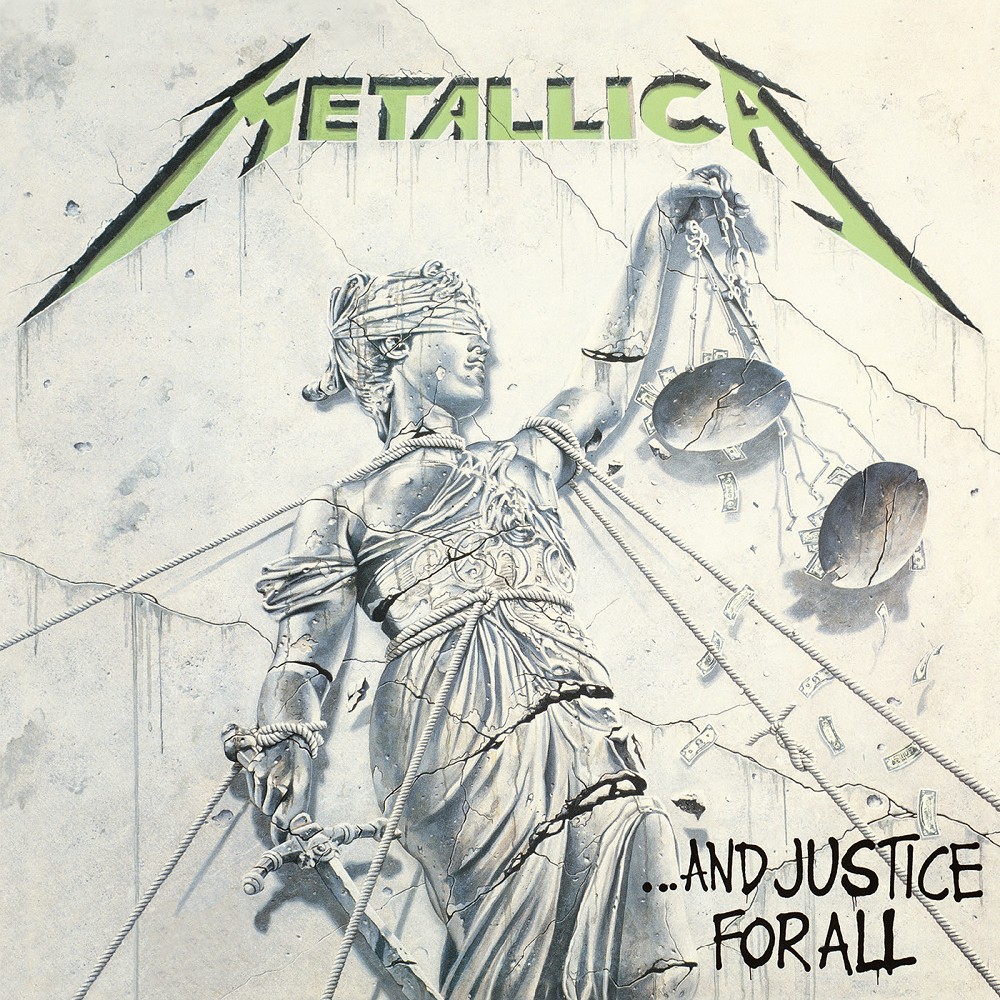 It's 2001 and I'm 14 years-old, new to the world of metal, and a huge Megadeth fan (or so I thought...). They'd just released their album 'The World Needs a Hero', in which they went "back to their metal roots" (every band goes through this phase). Tuning into Kerrang TV, they were midway through a video that, for whatever reason, I suspected it may have been Megadeth's video for 'Moto Psycho'. It was heavy, it was aggressive, and I was headbanging to it with my measly one inch of hair which I couldn't wait to grow longer. I also couldn't wait to get the new Megadeth album because this song kicked ass!

Except, it was Metallica's 'One'.

2001 was an exciting year for a 14 year-old metal fan living in the UK. With the nu metal scene having completely taken over the world, no doubt with huge thanks to the few channels that had popped up on TV dedicated to rock music, the genre was rife with bands such as Linkin Park, Korn, Slipknot and Limp Bizkit. However, despite all the bands that were tearing up the charts, it was Metallica's '...And Justice For All' that I was seriously digging. I loved the ten-minute songs with two-minute intros. I loved the complex arrangements with constant shifts in dynamics. I loved the guitar harmonies. I loved it all!

There's no denying the influence this had on me around that period of my life. Eventually leading me to progressive metal, a genre this album arguably had a huge hand in influencing in its infancy, bands like Dream Theater and Symphony X just seemed like the next logical step from here. Intricately crafted guitar riffs, harmonies and solos, with some of Lars Ulrich's most challenging drumming (which, fair play to the guy, he may have a rather limited skill set, but he sure busts his chops on this one), make this Metallica's most ambitious album, with the band themselves often citing how this was the most complex stuff they'd done.

The production is often criticized, but I was too young to care about such trivial things when I first got this record, so I find myself unfazed by it now. In fact, I find the sound, which comes across as very dry and gritty, sets the mood perfectly for this incredibly dark and bleak album. And with songs like 'One', 'Blackened', 'Harvester of Sorrow', 'Dyers Eve' and 'The Frayed Ends of Sanity', this is an absolute classic that belongs in the collection of any metal fan.

Metallica's flawed masterpiece and one of the defining moments of my life.

Most fans of metal music can easily look back on a particular band that first inspired them to delve into what can be a fairly inaccessible genre of music. I’m sure that in the majority of cases, the band in question was not from one of the more extreme styles of metal such as black metal, death metal or grindcore. The reason for this is that most people need an entry point where they can come to grips with a more accessible level of extremity before being equipped to take the next step. For me, there’s no question that Metallica were the band that kick-started my obsession. It would only be a matter of weeks from the time my brother (to whom I will be forever grateful!) handed me a cassette containing ...And Justice For All back in the late eighties, that I would be delving into the likes of Slayer and then Sepultura, followed shortly by Deicide, Morbid Angel and Bathory. These days there’s pretty much nothing that I find inaccessible from an extremity point of view (I'm not suggesting I find enjoyment in every style I hear), so I’m fairly unlikely to find many metal albums out there that are simply unapproachable given my experience. Yet despite this development of boundary limitations, my love for the band and the album that started it all has never diminished. The shining light of Metallica may have faded to black (sorry) long ago, but their heritage can never be taken away from them, or their fans.

Released on August 25, 1988, ...And Justice For All is the first full length album by Metallica after the tragic death of bassist Cliff Burton in a bus accident during the Master of Puppets tour. Jason Newsted had been selected from a long list of auditioning hopefuls to fill Cliff’s massive shoes and had displayed decent enough skills on the Garage Days Re-Revisited EP that the band had recorded as a test run for their new line-up and studio. The amount of effort that the band went through to find the right guy along with the significant preparation they put in to make sure they were ready before re-entering the studio makes it astounding that the blaringly obvious flaw with ...And Justice For All is that Jason is almost entirely inaudible. It’s a shame too, as this lack of low end, plus a generally sterile production overall, is a blemish on what is otherwise a fantastic and landmark album. Master of Puppets had already shown signs of the band adding a bit more complexity to their sound, but these progressive elements really came to the fore on its follow-up. The tracks are far greater in length than on previous releases which the band utilised to play around with complicated structures, branching off on technically adept tangents before returning to earlier established themes. As an album it makes for a fascinating journey, but it’s not surprising that the band rarely play these lengthy and complex tracks (such as the title track and To Live is to Die) in the live arena.

Lyrically, the album’s subject matter relates to injustice in the legal system (the bound and broken Lady Justice on the cover should give that away), freedom and war, and this sort of political and social commentary in Metallica’s music helped to establish these themes as “the new Satan” of metal music. While the level of complexity and increase in running time set ...And Justice For All apart from Master of Puppets, the band were forming a successful template of starting and finishing their albums with bursts of aggression, placing a ballad midway through to change things up, and including an epic instrumental in the bottom half. It’s a structural flow that works perfectly, running the gauntlet of emotions between two blood-pumping bookends. That being said, the album does have that midpoint lull (The Shortest Straw through to Frayed Ends of Sanity) that the band never seemed to be able to eradicate from their albums, but considering the general level of quality and surrounding classics like Blackened, the title track, One, To Live is to Die and Dyers Eve, it’s easy to forgive them. Over two decades have passed since Metallica changed my world, which is plenty of time for me to come to the realisation that ...And Justice For All is not the holy grail of all things metal that it so apparently was in my teenage years, but it holds a nostalgic place in my being and is just too damn important on a personal level for me to rate it anything below full marks.

Metallica enter a slight stylistic shift towards the progressive, slowing down a bit and delivering more complex, technical rhythms. This is actually quite possibly their least accessible album, not only lacking any sort of anthemic rockers, but also being pretty much a downer in mood the whole time. In addition, it tends to focus more on technicality and rhythm instead of instantly memorable riffs. That’s not to say the music here is really complex, but certainly more so than previous albums.

From that, you can pretty much tell what the strengths and weaknesses are. Here is Metallica at their darkest, most technically proficient, and most serious. It’s definitely got more points in terms of “thinking man’s music” than their other stuff, but on the other end, it definitely loses memorability. The songs are all quality, but most of them lack any insanely good riffs that get caught in your head. It’s also supposed to be their angriest album, but since the straightforward aggression is swapped for rhythmic precision, it certainly comes off as less passionate, and James is yelling in time more than he is in melody. This unfortunately sacrifices mood, which leaves songs a bit flat.

Now, there are two songs here that completely evade those weaknesses. “One”, as everyone knows, is an incredibly powerful “ballad” that basically goes through stages of grief, starting slow and somber before breaking out into manic frustration. Then there’s the closer, “Dyer’s Eve.” It’s possibly Metallica’s heaviest, angriest song ever recorded, detailing child abuse and showcasing Lar’s best performance yet. This song is so strong because James sounds very convincingly full of anger and hurt, and everyone is playing at the apex of their ability.

It’s certainly a “different” album even considering Metallica’s varied discography, but it was very much a success and resulted in some of their best material.

Rewarding! Superior to Master of Puppets in the long run!

This album sees Metallica take a more technical and progressive approach to songwriting, and I love how it turned out. "One" is sheer brilliance and the rest of the songs are overflowing with great riffs and an dark, angry vibe that Metallica never had before. This album's sophistication rewards repeat listens and has steadily climbed up my Metallica album rankings in all the years since I've been a fan.

...And Justice for All is better than the [slightly] overrated Master of Puppets and perhaps on near-even footing with the inspired Ride the Lightning. If the bass was more audible and "The Shortest Straw" was replaced with a song as great as the other eight, this would easily be a five-star album.

4.1
Band
Metallica
Release
...and Justice for All
Year
1988
Format
Album