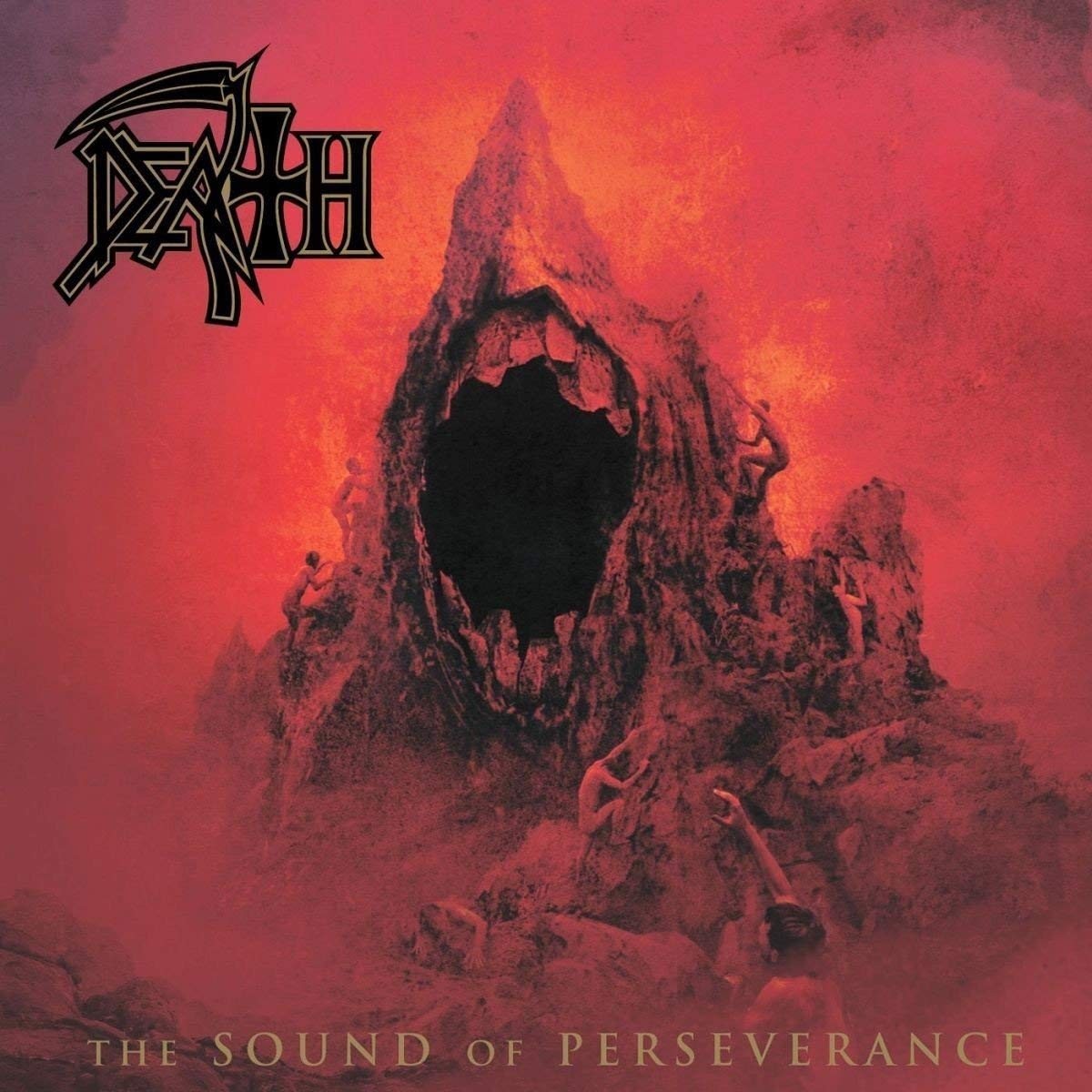 Albums grow on you for different reasons.  As an avid fan of most of Death's earlier releases I didn't find the same levels of entertainment in much of anything after Spiritual Healing.  Whilst I could more than see the talent and skill involved in the direction that Chuck was taking Death's sound, progressive elements of metal have only recently become of interest to me - over the last 12 months say - so for a number of years the majority of the bands later releases gathered some dust on my shelves.  I now find myself oddly in the reverse mindset where I prefer the later output to the initial three releases.  For me The Sound of Perseverance is the crowning glory in this more progressive style of death metal, largely because the whole thing just feels so natural and effortless.

Oddly for death metal, there are lots of feel good vibes for me on this record.  The chords sound more open but the riffs are just as cutting as you would expect from one of the founding fathers of death metal.  Whilst obvious, the time changes are not intrusive and feel clean and polished.  Again these are traits i would not attribute to me gleaning enjoyment from in terms of my more extreme tastes but they work so well with the confidence and aptitude of Schuldiner, Hamm, Clendenin and Christy.

The band sound like they enjoyed making the record, such is the warm feel to proceedings.  They almost tease the listener during Story To Tell, with their stop/start playing leaving you wondering if the track is over or whether another time change is due.  There's an accessibility to proceedings that is reminiscent of almost rock music proportions, only Chuck's grim vocals and the chugging riff passages keep you of the understanding this is still a death metal record at its core.  The creepy atmospheric bass and guitar interlude during Flesh and The Power it Holds also adds the necessary levels of menace you'd expect.

In terms of criticisms (what is keeping that half star off the score) I have two.  Firstly, the cover of Priest's Painkiller is both out of place in the greater context of the album and also not a very good cover either.  Secondly, the album is a tad too long with the cover on here.  In terms of flow it is all mapped out superbly as an album but it just falls at the end unfortunately.

An impressive and highly progressive album, but one I struggle to connect with.

Death’s 1995 album Symbolic had been an astounding release that was pretty close to perfection when it comes to progressive death metal. Chuck had evolved each album in a fairly linear direction away from straight forward death metal, and with that album appearing to take the sound as far as it could go without falling out of the genre altogether, fans were left wondering just where he’d take things next. As it turns out, Chuck was wondering the same thing and in 1996, he put the band on hold to have a good hard think about the future of Death, if there was going to be one at all. During this hiatus, Chuck decided to form a very different band called Control Denied that would allow him to create more melodic and traditional progressive metal music. He once again handpicked a bunch of talented musicians from within the local Floridian scene, with the initial line-up containing Chuck (guitar and vocals), Shannon Hamm (guitar), Chris Williams (drums) and Scott Clendenin (bass). This line-up released a couple of demos that notably included tracks called Bite the Pain and Spirit Crusher, both of which would eventually become part of the next Death album. Chris would soon be replaced by drummer Richard Christy, and just when it looked like Control Denied were about to record a debut full length album, Chuck surprised all with an announcement. A new Death album was on the way, and it would contain the Control Denied line-up.

There were two main reasons why a new Death album was to be released prior to a debut Control Denied recording. Firstly, Chuck had decided that he wanted to concentrate on guitar for his new band and had begun the hunt for a suitable vocalist to take his place. The search was taking far longer than he anticipated with his first choice, Warrel Dane from Nevermore, too busy to commit to Control Denied. Secondly, Nuclear Blast agreed to sign up Control Denied only if Chuck released a Death album for the label first. This hardly seems to be the ideal basis for an album, with Chuck pretty much being forced into making it, rather than having honest inspiration to do so. There’s no doubt in my mind that this enforced element can be heard when listening to The Sound of Perseverance, but that’s not to say that it’s a bad album. While the death metal in Death had softened over the years, there was never any doubt which band you were listening to, even with almost entirely different line-ups on each release. This time around that’s just not the case, with only the occasional riff or lead reminding you that this is the same “band” that released albums like Human and Symbolic. The progressive element has been amped up to much higher levels and the more traditional death metal riffs are far less prominent, none of which is surprising when you consider the members of the band were never hired to play to death metal in the first place.

The more progressive metal style of The Sound of Perseverance is not the only thing that makes this album stand out from the rest of the Death discography. Chuck’s vocals have a much higher tone than on previous releases, approaching black metal-like screams while remaining completely intelligible. Chuck had stated that he was really tired of doing the lower growls night after night, which is one of the reasons he wished to move away from death metal for a while, so I can only assume he changed his style just for something different. The new vocals are not particularly bad, but I have to admit that I prefer his normal more guttural style much more, and find the shrieking to be a bit distracting in this musical context. While I’m talking negatives, I’ll also bring up what is probably my biggest gripe with The Sound of Perseverance, and that’s compositional flow. Albums like Individual Thought Patterns and Symbolic were certainly adding progressive elements to the Death sound, but this aspect never got in the way of the smooth, organic song structures. Never did I feel that the obviously highly technical musicianship or complex shifts were there purely for show, and everything utilised served a purpose within each track’s framework. That’s just not the case on what would unfortunately be the last Death album, with plenty of jarring transitions and every member of the band showing their skills at times when the album just doesn’t require it.

Even with these personally annoying factors, The Sound of Perseverance is undoubtedly still an entertaining album. The musicianship is truly impressive and from a purely technical perspective, there are not too many albums out there that could match it. Every track has moments of sheer brilliance with crushing riffs, exquisite leads and some fantastic drumming from the very impressive Richard Christy. The majority of the album’s highlights occur in the first half with Scavenger of Human Sorrow, Bite the Pain and the wonderful Story to Tell containing the most fluent and consistently enjoyable structures overall. The closing Judas Priest cover Painkiller is a relatively kick-ass version of a classic track, but as is usually the case with covers, it contains a distinctly different feel to the rest of the album that once again disturbs the flow that is normally present on everything Chuck touches. It’s not surprising to me that there are many out there that consider this the finest Death album, as it would undoubtedly have drawn a whole new crowd to the band. Its rating on this site alone is high enough to suggest my slight disappointment with The Sound of Perseverance is very much in the minority. Four stars may not seem harsh in any way, but given I rated the three previous Death albums a full five star rating with no hesitation, that should be enough to imply where I position this album when it comes to the history of one of the very best bands to ever exist.