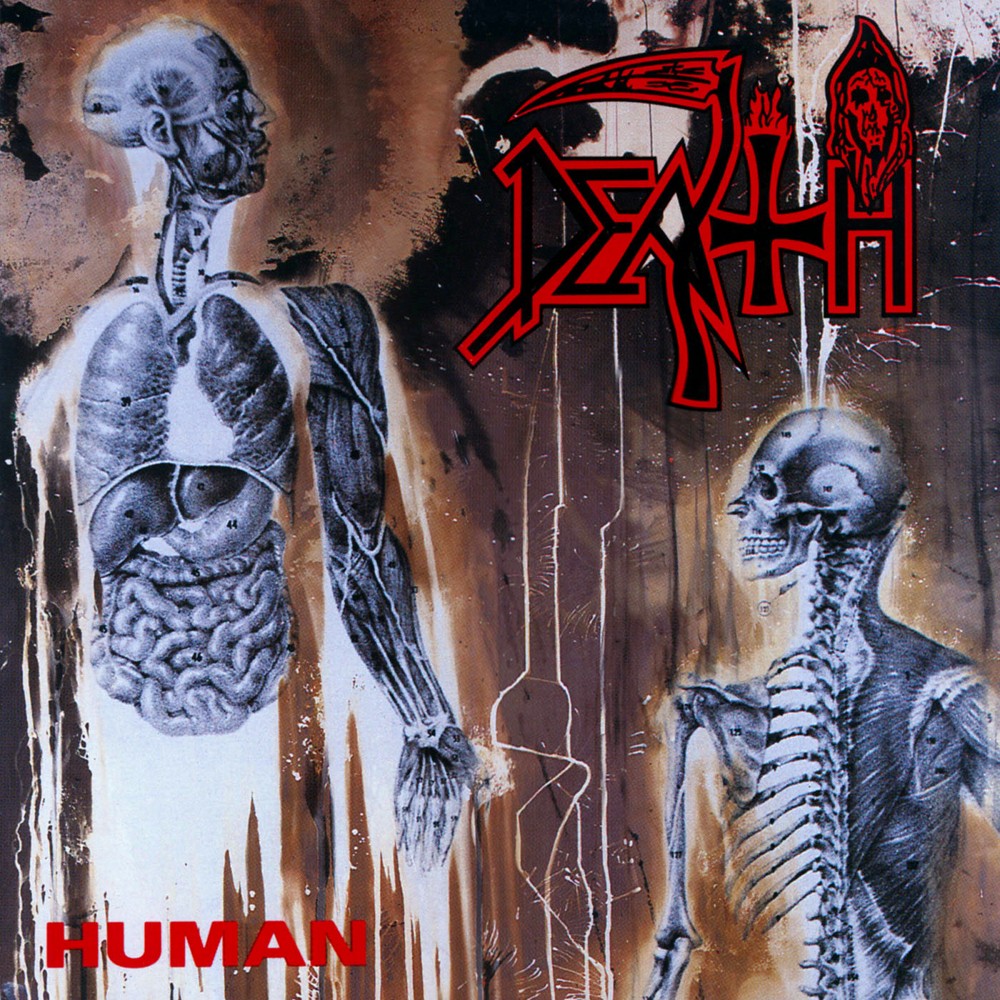 One of the finest albums in extreme metal, Human deserves every bit of praise it receives.

“All words and music by Chuck Schuldiner.” That line can be found in the album sleeve of Death’s fourth album entitled Human. After years of trying to pull together a stable Death line-up, Chuck finally figured it would be far easier to be the only full time member of Death, and hire session musicians to help produce his vision. It’s not at all surprising given the terrible run he’d had since the band formed in 1983 under the name Mantas. Things had finally seemed to settle down around the time Spiritual Healing was recorded at the end of 1989. Bill Andrews (drums) and Terry Butler (bass) had remained with Chuck for a couple of years and with second guitarist Rick Rozz finally out of the band due to constant conflicts and replaced by the talented James Murphy, surely this Death incarnation could stick around for a while. The second half of 1990 put an end to that hope as Murphy departed the band for reasons I’m unaware of. Things got far worse when Chuck decided to pull the plug (sorry, couldn’t help myself) on a European tour as he felt it was not organised adequately. In a fairly traitorous move, Andrews and Butler recruited roadies Walter Trachsler (guitar) and Louie Carrisalez (vocals) and went on tour as Death without Chuck. As you’d expect, Chuck took legal action and Andrews and Butler were fired from the band, leaving Death in danger of collapsing altogether.

So it was, with the sheer determination that characterised the man through his entire life, Chuck went about writing material for a new Death album on his own, then recruited three of the finest musicians he could find to help him record it. While the Floridian technical death metal band Cynic had only recorded demos at this stage, they’d already made a name for themselves as excellent musicians, so Chuck hired guitarist Paul Masvidal and drummer Sean Reinert. For bass he selected none other than the godlike Steve DiGiorgio from Sadus and the four of them entered Morrisound Studios with scene legend Scott Burns in April 1991. As amazing as that line-up is on paper, it would all have come to nought if Chuck hadn’t written great material for them to perform. He did far more than that as Human is quite simply one of the very finest death metal albums you could ever have the joy of experiencing. It only has a running time of 33 minutes, but not a second is wasted with technically advanced, crushingly heavy death metal from start to finish. Spiritual Healing had already progressed Death’s musicianship and themes to intellectual heights unprecedented within the genre to that point and Human would take it a very large step further. Not only did the three session musicians bring with them a wealth of talent, but Chuck himself had improved dramatically in a short space of time.

One of the main criticisms that can be directed at Death’s first three albums is that the drumming is monotonous and not quite up to the standard of the remaining performances. Sean Reinert on the other hand is nothing short of sensational, combining relentless double bass kicking with jazz fusion inspired technicality. When combined with the endless stream of tasty riffs and both guitarists’ jaw dropping yet highly memorable leads, this is a death metal fans’ wet dream. Chuck’s vocals were still getting better with every album and his lyrics more and more thought provoking. This time around he discusses what life might be like for someone without vision or who was born as a Siamese twin, yet he does so with a high level of empathy rather than in a condescending way. Unfortunately DiGiorgio’s bass is pretty well hidden beneath the guitars for the majority of the album. When his performance breaks through it’s nothing short of the excellence we’ve come to expect, but considering how prevalent he would be on Individual Thought Patterns, it’s fair to say that he gets a bit short-changed on Human. It’s tough to pick highlights when the whole album is this great, but my personal favourites would be Flattening of Emotion, Lack of Comprehension and Cosmic Sea. The latter is right up there with Cynic’s Textures as the greatest instrumental performed by a death metal album. Human is one of metal’s finest pieces of work and utterly deserving of five stars.

Human is not necessarily my favorite Death album, but I think it was the most influential one in the formative years of my metal journey. Hearing the lyrics and instrumental intro of "Lack of Comprehension" for the first time expanded my perception of what non-Melodeath "Death Metal" was capable of as an art form. Hell, my first username on RateYourMusic was cosmic_ocean because "Cosmic Sea" was taken.

In parallel, although Human is not necessarily the best Death album outright (although it certainly has an argument), I think it likewise was the most important one for the band and for the genre at large. It was a transition album for the band, the crossroads between the more straightforward "brutal" stylings of earlier albums and the buffets of instrumental showmanship and progressive songwriting that later albums would become. The arrival of god-tier players Steve DiGiorgio on bass and Sean Reinert on drums allowed band leader Chuck Schuldiner to tap into new creative possibilities, while still viewing things squarely through a primarily Death Metal lens at this time (later albums would lean more towards Prog Metal with death metal vocals). The results accelerated every direction that the genre would spiral off in in the coming years... from Brutal Death to Techdeath to Melodeath. In particular, Human would inspire decades of Techdeath shredders.

For many, calling Human a "transition album" doesn't quite do it justice though. Indeed, the quality is so damn high (half the songs are bona-fide Death Metal classics) that it feels an affront to imply Human was simply means-to-ends in the development of the band. These people would justifiably argue that Human was also a "Best of Both Worlds" album... the precise moment in time where the stars aligned and Death found the perfect balance between their earlier and later sounds. From this perspective, Death here had sufficiently leveled up their instrumental, songwriting and production capabilities but hadn't yet lost touch with their inclination for brutality, creating a perfect storm that Death would never recapture.

Do I agree with this perspective? Well, listening to the album as I write this... it's hard not to. I more often opt for Symbolic for its flow and sheer front-to-back listenability, but Human slaps in a completely different way. The first three songs are a tour-de-force of technical yet gut-punchingly heavy yet undeniably catchy Death Metal (being all of three of these at once is NOT EASY)... and then by the time you get to that monstrous middle section of "See Through Dreams", you can no longer doubt you're listening to one of the most brilliant works in the history of the genre.

Now, for me, that moment is where the album peaks, so to speak. Whenever I spin Human, I typically quit after Track 6. If you refer to Paragraph 1, I obviously thought the song title and bass solo of "Cosmic Sea" were cool as a teenager, but the instrumental interlude does disrupt the unstoppable momentum the album had built up to that point. And then closing track "Vacant Planets" is the only one here that just never really gripped me. It has a cool spacey riff, but represents a disappointing conclusion for an album that was so immense through six tracks.

So is Human an immaculate masterpiece that will forever sit atop the Death Metal pyramid? Or, in retrospect, was Human more of an influential stepping stone to greater works? As always, the truth is somewhere in the middle...

One thing is for sure though. It's damn close to the top of the pyramid.

Death continue pushing towards increasingly technical music here, and interestingly retain the more melodic style of riffs and leads found on Spiritual Healing. From the first song “Flattening of emotions,” we get some riffs that sound less like “hell infernal evil” and more like “humanity is suffering.” There’s real depth here, and daresay mood and emotion as well. I do believe Death was responsible for influencing melodeath on this and their previous album, which is why I prefer them to the straight OSDM “Leprosy.”

Schuldiner’s lyrics and vocals reach a more mature point, and his guitar playing is top class. The rest of the band, especially drummer Sean Reinert, really impress in managing to stand out next to Schuldiner here. The instrumental track is pretty weak in comparison to the rest, but the album still manages to be a masterpiece easily run through front to back. So many amazing riffs that are carried by a great depth in both the songwriting and themes.