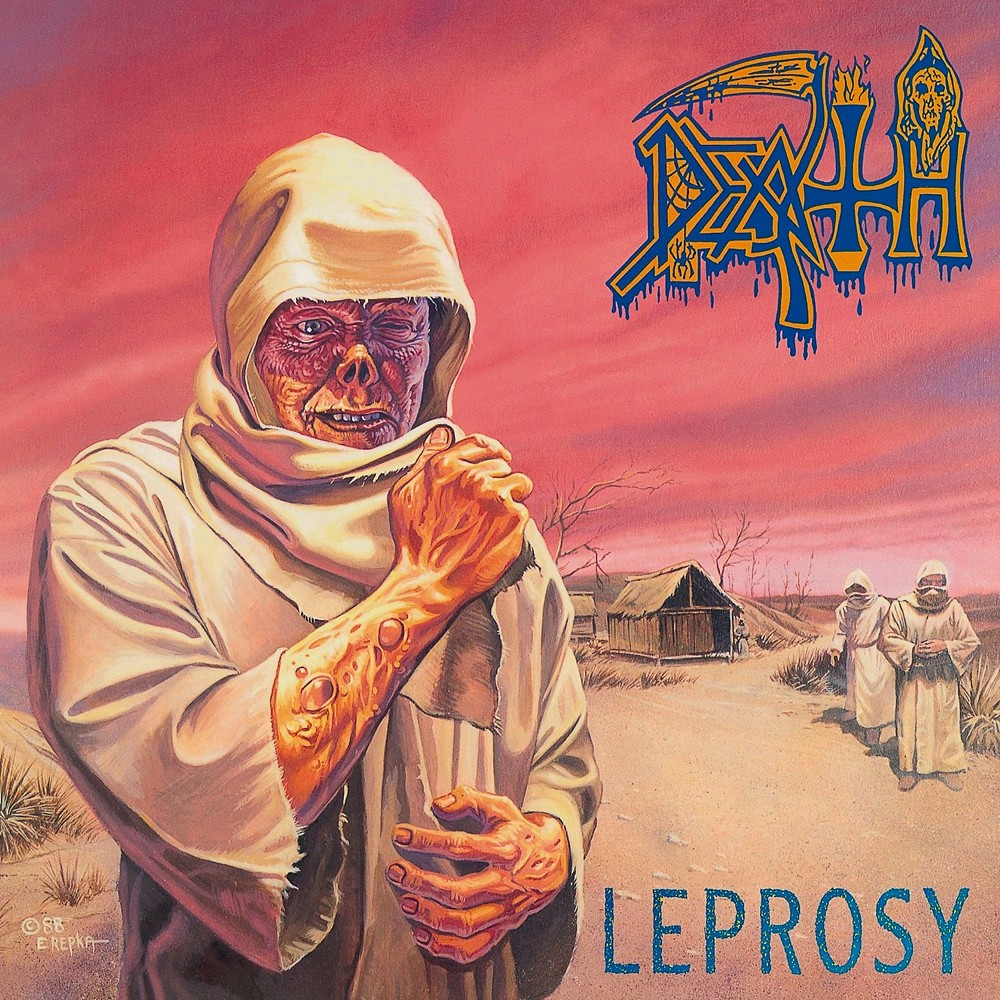 As would become the norm for Death, this is a whole new line-up to the preceding album. Chris Reifert, who played drums on Scream Bloody Gore, stayed in San Francisco when Chuck moved back to Florida in 1987, therefore ending his involvement with the band. The original line-up of Death, way back in 1984, had contained Chuck, Rick Rozz on guitar and Kam Lee on drums, yet after Rick and Kam left the band they’d joined up with Allen West and Bill Andrews in Massacre. That band would also have numerous line-up troubles and disbanded several times. In 1987, during one of those breaks from Massacre, three members of Massacre (Rick, Bill and bassist Terry Butler) joined forces with Chuck to make an all new Death line-up. The four of them were responsible for numerous live performances in this period and are credited as the line-up for Leprosy, yet typically for Death (Scream Bloody Gore had a band photo containing guitarist John Hand even though he never played with the band), things aren’t that simple. Despite the album liner notes suggesting Terry performed bass on Leprosy, Chuck has since stated that he himself performed all bass on the album, meaning the official album line-up is Chuck (guitar, bass, vocals), Rick (guitar) and Bill (drums).

Those listening to Leprosy today often complain about the snare sound and there’s certainly no denying that it distracts from the end result. But in 1988, this was the most extreme and exciting recording imaginable and it was exactly how fans thought death metal should be. Leprosy was the first full length death metal album recorded in Morrisound Studios in Tampa, Florida. The resulting sound was so incredibly influential that multitudes of bands tried to replicate it over the next few years. In fact, within two years of Leprosy being released, Atheist, Morbid Angel, Terrorizer, Obituary, Deicide and Nocturnus had all recorded their classic debut albums at the studio. The infamous Scott Burns was involved in many of these albums in some form, but it’s worth pointing out that he held an engineering position only for Leprosy, with Dan Johnson producing. Morrisound would become synonymous with death metal and just about every classic American death metal album would be recorded there over the next decade, including all remaining Death releases and monstrous classics like Morbid Angel’s Blessed Are the Sick, Obituary’s Cause of Death, Atheist’s Unquestionable Presence, Cynic’s Focus and Suffocation’s Pierced From Within. But let's have a good look at the original!

They say you shouldn’t judge a book by its cover, but Scream Bloody Gore had been everything it said it was going to be on the box. Blood drenched old school death metal with gory lyrics and a nasty, malevolent atmosphere. Yet a few tracks, such as Zombie Ritual and Baptized in Blood, hinted that later Death outings might have something more to offer fans with some neat melodies and reasonably complex song structures. Leprosy certainly delivered on that promise and while there’s no doubt that Death had not yet reached the technical mastery or breathtaking song writing displayed on albums like Human, Individual Thought Patterns and Symbolic, they singlehandedly pushed the evolution of death metal into overdrive with this release. German magazine Rock Hard once voted Leprosy the number one most important death metal album of all time, and while I’m not going to throw impressive statements like that one around, it would have to be up there on any list of its type. The title track, Left to Die, Pull the Plug and Open Casket are classic Death tracks that still offer up huge entertainment decades later. It’s the type of album you put on when you just want to bang your head to a consistent flow of solid death metal from the guy who arguably designed it.

The lyrical content also began a transition between the horror themed gore of the debut album and the more intelligent and thought provoking material of later works. The difference between songs about horrifically torturous ways to die based in fantasy and horrifically torturous ways to die based in reality may not seem particularly dramatic, but there’s no doubt a shift in lyrical maturity between tracks such as Regurgitated Guts or Evil Dead and Leprosy or Pull the Plug. It’s hard to mention Pull the Plug without discussing the sad irony that its theme would end up holding for Chuck. One has to wonder whether he thought back on the lyrics while he struggled to survive brain stem cancer and pneumonia at the age of 34. “Pull the plug, Let me pass away, Pull the plug, Don't want to live this way”. I won’t be disrespectful and suggest he might have regretted underestimating the importance of life with these words as I’m in no position to judge the man, but it certainly gives the track more of an emotional edge for those of us that knew him only through his music. His death is in no way the only reason we worship the music of Charles Michael Schuldiner, but it certainly makes us realise how precious it is that it ever existed in the first place.

I think the most interesting thing about Death and Chuck Schuldiner is their/his absolute refusal to sit on his laurels and keep rehashing the same tropes over and over, but rather to continuously drive his band's development forwards. I must confess to being in the minority who prefer Death's earlier, more brutal and straightforward death metal material to their later more progressive leanings, but that doesn't mean I can't appreciate Chuck's compulsive need to improve and expand his music and the enormous impact and influence that had on what was still essentially a fledgeling genre.

As was common on all Death albums, there were wholesale lineup changes between Scream Bloody Gore and Leprosy. Chris Reifert had vacated the drum stool to form Autopsy and was replaced by Massacre skinsman Bill Andrews whilst fellow Massacre member, guitarist Rick Rozz, who had played with Chuck when Death were called Mantas, also joined up. Lineup changes aren't the only difference between the two albums - gone are any remnants of the thrash riffs that still remained on SBG, Leprosy being most definitely founded on death metal riffs. Lyrically there is a shift in focus from the violence and gore of the debut to an existential and philosophical examination of death - the futility of death in war (Left to Die), the effects of death on the living (Open Casket), the (still) thorny question of assisted dying (Pull the Plug) and, most poignantly considering Chuck's ultimate fate, the debilitating physical and mental effects of disease (Leprosy).

One of the main discussions of Leprosy centre around the drum sound and the technical deficiencies of skinsman Bill Andrews. Now, as far as the former goes, that pronounced, oh-so eighties snare sound is a minor annoyance and is a negative for me, albeit possibly not to the extent it is for some other commentators. I have also seen Andrews lambasted for technical ineptitude, but I for one am definitely in no position to comment in that respect. He seems functional enough to me and although it seems apparent he would probably struggle with any high velocity blastbeats, his actual performance isn't such a huge problem to my non-musician's ears as it seems to be for other, more knowledgeable, reviewers. As far as rhythmic functionality goes, Chuck's basslines do what is required and no more, quite often just following what the guitars are doing. The addition of Rick Rozz as second guitarist is a big plus for Leprosy over Scream Bloody Gore. I think if Rozz was on the UK's quiz show Mastermind his specialist subject would be "the guitar solos of Kerry King" as his soloing style seems very much in the style of the Slayer axeman. I must add the caveat that, although he does mimic Kerry King's style, he seems technically and creatively better as his solos retain the aggressive urgency of King, but are also more expansive and more adeptly executed - the solo in the middle of Open Casket for example begins in classic King style, but then develops well beyond those confines and ends up as a real killer.

Leprosy still contains a huge amount of aggression and sheer adrenaline-rush riffing, but it is also a tighter and occasionaly more melodic album. The songwriting, whilst still being far from progressive in nature as on Death's later work, has a bit more variety and complexity than the debut and does serve as an indicator of Chuck's ambition amd musical trajectory. Despite these differences between Death's first two albums I think I enjoy them both equally, but probably for different reasons - the sheer exuberance and irreverence of the debut and the more highly polished and greater ambition of the follow-up both deserve high praise. On a historical note, Leprosy was apparently the first death metal album recorded at the legendary Morrisounds studio where so many death metal classics were birthed.

Death’s debut album was a very traditional and straightforward Death Metal release. There’s absolutely no shame in that, and since it was one of the first Death Metal albums ever, it was innovative despite being as straightforward as Death Metal goes. However, Chuck upped the ante on their sophomore Leprosy by adding a good amount of technicality and progressive elements to the songwriting. The lyrics are also better than the juvenile rubbish on the debut; still death and violence, but written much more effectively. Much like Ride the Lightning was to Kill ‘Em All, the songs here are much more mature and developed, each offering multiple passages, wild solos and a huge number of massive riffs. It’s also very consistent; some songs lean more towards the new technical direction than others, but every track is a killer.

It’s still classic OSDM most of the time, but the songwriting techniques in such an early stage for the genre are what laid the groundwork for Tech Death and Prog Death. This band was one of the first on the scene of Death Metal, but instead of remaining stagnant in that position, they continue to innovate and evolve the scene further.