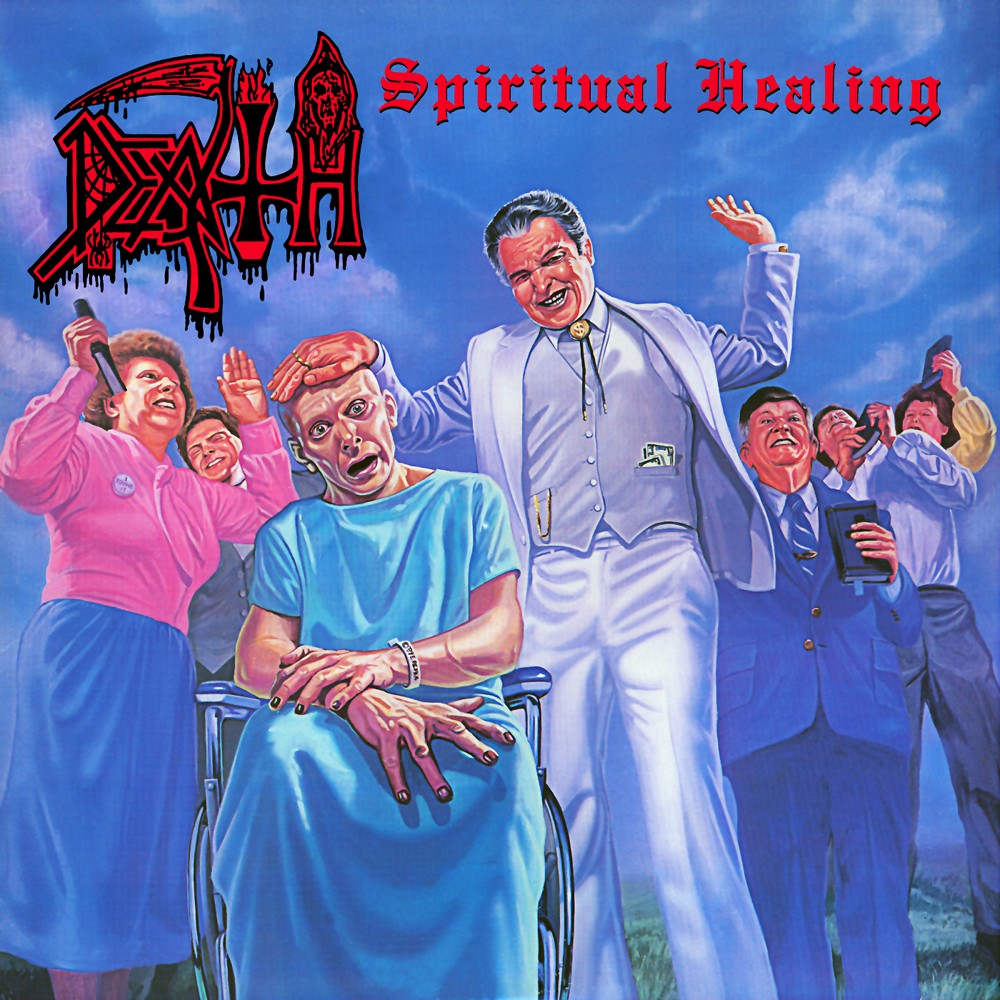 Another step up in maturity for Death, Spiritual Healing is an underappreciated display of courage.

Given the band’s tumultuous history, it’s not surprising that the line-up between Leprosy and Spiritual Healing had changed. By the end of 1989, Chuck and second guitarist Rick Rozz were constantly in conflict, with the end result being that Rick was removed from the band. Chuck later stated the main reason this occurred was due to Rick’s unwillingness (or inability) to progress as a musician and given the band’s progressive ambitions, they needed to find a suitably talented replacement. James Murphy was that man. These days Murphy is a metal legend after being involved in albums by Obituary, Testament, Cancer and Disincarnate, not to mention several mostly instrumental albums released under his own name. His lead guitar work is brilliant and the ease at which he performs it highly admirable. At the time Chuck handpicked him to join Death, he was known only for his connection with thrash metal bands Agent Steel and Hallow’s Eve, yet had very little studio experience. That was all about to change though, as in the summer of 1989, Chuck, James, Terry Butler and Bill Andrews would enter the infamous Morrisound studio to record Spiritual Healing. It’s worth noting that this was also the first time Terry Butler had performed on a Death album, as Chuck performed bass on Leprosy despite Terry being listed as such on the album sleeve.

While these four musicians knew what their ultimate goal was at the time, it’s safe to say that many of the band’s fans did not. Death’s previous album Leprosy was a genre classic. It gave death metal an unprecedented brutality while still remaining entirely memorable and entertaining. All eyes were on Chuck to see what he’d unleash next with most fans expecting something even more brutal and shredding. Looking back, it’s not particularly surprising that a lot of these fans were a bit disappointed with the end result, but I believe this response had more to do with expectations rather than the quality of the material. Death chose to evolve away from the raw, vicious approach of their earlier albums and take on a more technical and mature style. The gory, violent lyrics were gone, replaced with social commentary regarding important issues such as abortion, religion and genetics. The ferocious, thrashy production of yesteryear was replaced with a clear Scott Burns driven, instrument focused sound this time round. Above all, the musicianship in general stepped up a level of technicality with exquisite leads and varied time signatures combining with the more standard death metal trappings. Chuck would expand on this over the next few releases of course, but Spiritual Healing deserves credit for getting the evolution well and truly off the ground.

It needs to be said though, that Spiritual Healing is not a flawless effort. As you would expect for a band trying to break new ground, not everything clicks the way it does on later albums such as Human, Individual Thought Patterns and Symbolic. For all the fantastic guitar work by Murphy and Schuldiner, drummer Bill Andrews is an obvious weak point. He does tinker with odd timings and there’s some nice double bass kicking, but in general his performance is simply too monotonous for an album with such a progressive attitude. Terry’s bass is adequate enough, but pales in comparison to the jaw dropping work of the session musicians Chuck would call on for future albums such as Steve DiGiorgio. Weaknesses aside, the song writing is totally compelling, with top riffs pumped out consistently throughout. Chuck’s vocals are powerful and venomous yet entirely decipherable which is perfect for the lyrical content and musical style of the album. Chuck stated prior to the release that “we believe that we can turn a few more people into death metal with this record and change a lot of people’s minds about what death metal is supposed to sound like”. I believe they did just that, and tracks like Living Monstrosity, Altering the Future, Spiritual Healing and Genetic Reconstruction sit perfectly well amongst the best work in Death’s discography. An underappreciated album!

Sidenote: Spiritual Healing is the third and final Death album to contain artwork by Edward J. Repka. The artist is undoubtedly more known in the world of thrash metal where he’s made a strong resurgence due to the recent thrash revival. I think the three covers he produced for Death are among his best work. He brilliantly nailed the themes of each release and, despite his easily recognisable style, gave each piece entirely distinctive looks. One thing that makes Repka’s covers so unique is his use of colour. The purple of the skeleton’s robe on Scream Bloody Gore, the pink of the sky on Leprosy, the variety of blues that characterise Spiritual Healing. These are colours not often associated with death metal and yet they’re all so striking while taking nothing away from the morbid edge so necessary for albums of this genre. The cover for Spiritual Healing is the best of the three, mostly due to the way it presents its message so clearly with both humour and realism. The smugness and near psychotic worship of the faithful are juxtaposed by the sheer terror of their subject. The cash is placed so precisely to remind us of the healer’s true intentions. I feel disgust at the truth of it and yet laugh at the painting’s satirical tone. These characteristics are prevalent through nearly all of Repka’s album covers and it’s fantastic to find the man still cranking them out.

In 1988 Chuck Schuldiner had turned the underground metal scene on its ear with Death’s second album “Leprosy”. It had really raised the bar as far as extremity was concerned but had also combined it with some excellent song-writing & memorable hooks. Extreme metal fans lapped it up it & it ended up going down as one of the defining death metal records in history. When the release of Death’s third album was announced most people were expecting an even more brutal assault on their senses. It marked the first Death release since my conversion to death metal so I had more than a casual interest in it.

“Spiritual Healing” saw Chuck make a number of conscious changes to his tried & tested formula. Firstly he decided to tone down the brutality a touch & incorporated some more progressive ideas into his song-writing. Listening back now it doesn’t sound like anything major but at the time it was regarded as a fairly adventurous approach. Chuck brought in hired gun guitar shredder James Murphy to add some class to the solos & Terry Butler got the opportunity to contribute on bass guitar for the first time. There was also a notable change in Chuck’s lyrical direction. This time he was tackling real life issues like drugs & abortion instead of the standard death metal themes of zombies, murder & general nastiness. These changes contributed to a more mature & professional sounding Death; one that was obviously looking to continue leading the pack rather coasting on past successes. Not everyone was positive about Death’s new direction but personally I thought it opened up a world of new possibilities & was intrigued.

Upon first listen it’s immediately obvious that this was not going to be “Leprosy II”. The clean & powerful production is an obvious step up from the raw ugliness of the past & everything sounds quite precise. There are some more adventurous timings on offer than we’d heard from a death metal band to that time but I wouldn’t say it’s anything over the top by today’s standards. In fact the drumming is quite simple throughout the album & that has always annoyed me a little. Bill Andrews drumming during the fast sections is simply not brutal or interesting enough for my liking & I feel that Chuck would have been much better served by recruiting someone more capable. Terry Butler puts in a solid performance on bass although I must say that I prefer the more progressive & challenging bass lines that are a feature of all subsequent Death releases.

On the more positive side of things James Murphy’s guitar solos are quite special & add an entirely new element to the band; one that would be a constant for the band even after his departure. Chuck’s riffs are consistently brilliant & I think his vocals sound more powerful & intimidating than ever before. Opening track “Living Monstrosity” is an absolute corker & is my favourite track on the album but the next four are all very solid pieces of death metal. There really aren’t any weak songs but I think the last three are probably a touch lower in quality than the rest of the album so things do just tail off a little in the back end. Most tracks have some cracking riffs that really utilize the production advancements & you are constantly reminded that this is a more mature Death than you’d heard on their first two albums.

"Spiritual Healing" is an often overlooked album in Death's back catalogue due to the classic releases either side of it but if you disregard those & look at it as a singular piece of art then it offers a clinical & fresh take on the death metal concept & a damn fine listening experience. In fact I probably favour it slightly over Death's ground-breaking debut album "Scream Bloody Gore" to be honest. "Spiritual Healing" is generally regarded as a transition album (& that idea is not without merit as 1991’s “Human” would expand & improve on the ideas Chuck presents here) but there is more to this album than that. This is high quality death metal that oozes class.