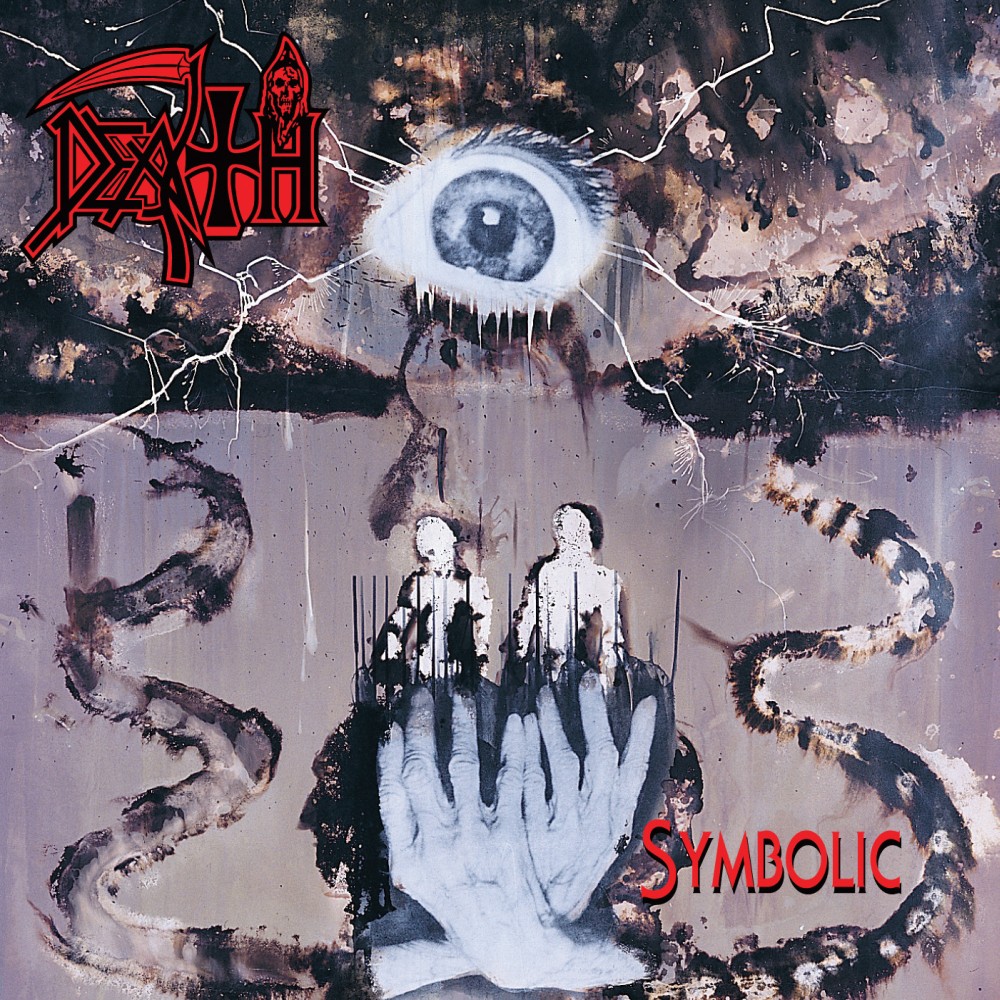 At this stage of the Death discography, it’s not surprising in the least to find that there’s a new line-up involved. The revolving door policy seemed to spin even faster once Chuck decided to hire mercenary musicians to perform on each album, rather than try to find a stable, permanent line-up. Individual Thought Patterns had taken Death’s music to new progressive and technical heights, thanks in no small part to the talented musicians involved. But when it came time to enter the studio to record album number six, drummer Gene Hoglan was the only part of that team available to assist. Bassist Steve DiGiorgio, being the band-whore that he is, was seemingly committed to about twenty other bands at the time, and King Diamond’s mid nineties resurrection meant guitarist Andy LaRocque couldn’t help out this time either. Chuck would find a replacement guitarist in his old high school acquaintance Bobby Koelble, who had more experience in jazz (he’s now a jazz guitar professor at Rollins College, Florida) than he did in metal music. For bass guitarist he would hire another underground Floridian named Kelly Conlon. Whether these unfamiliar names could come close to matching the performances of stars like DiGiorgio and LaRocque was questionable, but Death’s new configuration entered the studio with another entirely Chuck Schuldiner composed album on paper, ready to go.

Any concerns about the personnel were thoroughly wiped away when Symbolic was released on March 21, 1995. With a further drop in brutality and a cleaner production than any previous Death recording, it’s apparent from the start that the new album was very close to leaving the death metal genre behind altogether. Even Chuck’s vocals, while still containing a raspy edge to them, are more accessible and decipherable, which make sense given the generally slower tempos and focus on complex song structures rather than the more aggressive approach found on the majority of Death’s work. From a musicianship point of view, Symbolic is absolutely stunning from start to finish. The riffs are filled with class and cover the whole spectrum from melodic gems to ferocious killers. Koelble’s input is fantastic, with awesome jazz-fusion influenced soloing to go along with Chuck’s expectedly brilliant leads. There are even a few gorgeous clean guitar sections which function perfectly amongst the progressive nature of the album. Hoglan’s drumming is out of this world, being a perfect combination of extreme metal heroics and jazzy, technically jaw dropping variations. After the attention grabbing bass volume on Individual Thought Patterns, it’s fairly noticeable how low in the mix Conlon’s performance is this time around. That’s likely to have just as much to do with him not really fitting in as a member of the band as it is to him not matching the stupendous talent of DiGiorgio.

As remarkable as the performances are however, it’s the song writing that makes Symbolic so damn entertaining, and completely worthy of its high position on the metal charts of Rate Your Music. There’s not one single track on this album that isn’t memorable, gripping and damn enjoyable all the way through. The longer average running time attributed to each composition really gives each track suitable breathing space to run its course with enough variation and inspired progressive touches so that none become repetitive or boring in the slightest. Listening to Symbolic is one of life’s greatest pleasures and at no stage is there an element that I wish wasn’t there or thought could have been done better. It is, for lack of a better word, perfect! In my opinion, each successive Death album was evolving their sound exponentially, and Symbolic is the pinnacle of that curve, not just for this particular band, but for progressive death metal in general. Tracks like the title track, Without Judgement, Crystal Mountain and Perennial Quest are beautiful examples of why metal should never be merely labelled talentless, unlistenable nonsense performed by angry losers. They in fact prove without a doubt that this wonderful form of music can produce some of the most brilliant and exquisite examples of art when performed by the right individuals. Chuck Schuldiner was undoubtedly a master of his art and Symbolic is his masterpiece.

Oh, baby. All of these tracks, yes - all of them, are brimming with unique and energetic riffs, phenomenal drumming, and stellar production.

But lots of great Death Metal albums have these qualities, you say! So what sets Symbolic apart even further? What gives it crossover appeal to listeners outside of usual Death Metal fans? That would be an ear for songwriting/composition to match any of the Rock greats, intelligent lyrics about society with easy-to-understand harsh vocals, and an overall genuinity not commonly seen in Death Metal.

But back to those riffs. Chuck Schuldiner is a true Guitar God because he did something really difficult: over the course of the Death discography, he developed his own sound and style of riffing that is immediately identifiable to HIM. On this release, Schuldiner refines his craft to a new level of potency.

This is the pinnacle of Death and a monumental album in progressive metal and death metal.