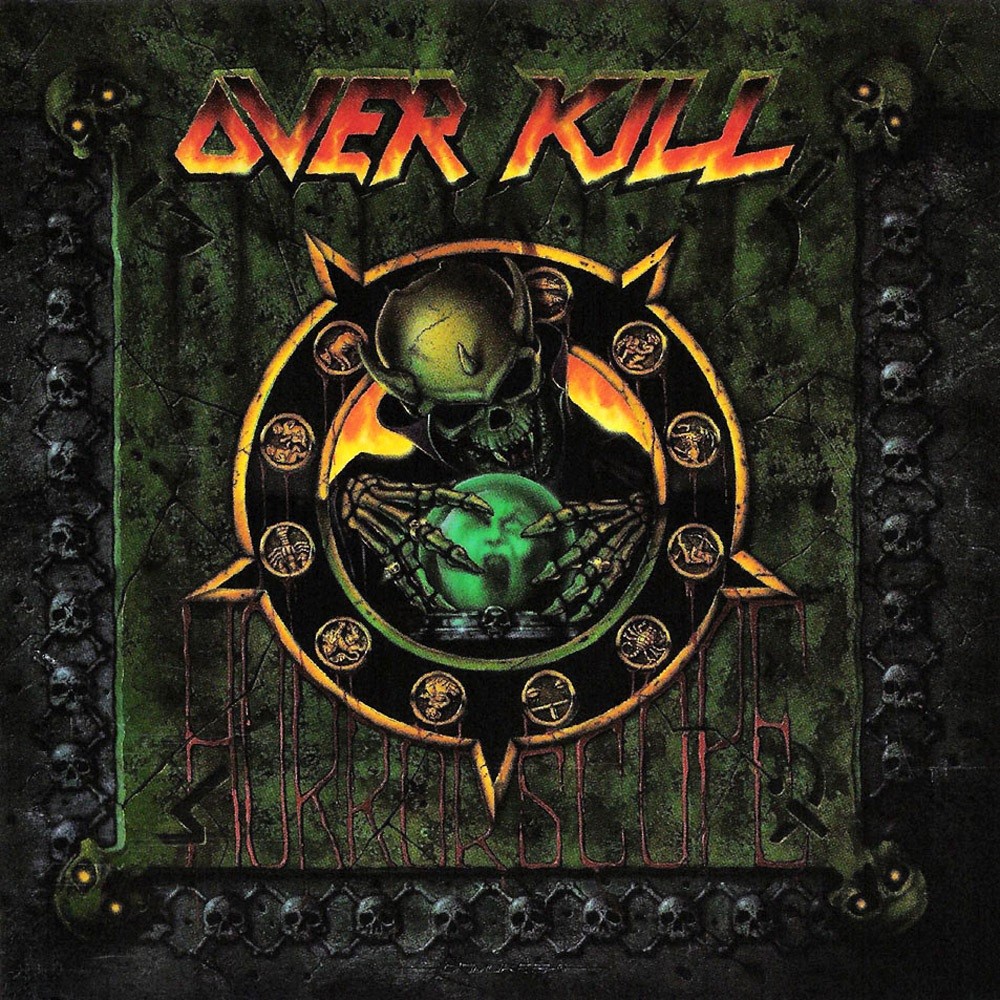 I purchased this album as soon as it came out and loved it straight away. I didn't know it at the time (it was my first experience with the band), but Overkill had really tightened the screws with this release. Their albums have always been fun but prior to Horrorscope, they just lacked a little consistency in my opinion. Albums like Years of Decay and Taking Over are fan favourites (and I enjoy them), but I found them to be slightly hit and miss. When the band put their heads down and structured their tracks, they always impressed me, but occasionally things got a bit silly and the wheels fell off somewhat. Horrorscope finds the band in awesome form and they clearly spent a whole heap of time making sure everything was tight and worthy.

Bobby Blitz's vocals also improved dramatically on Horrorscope and while he's still an acquired taste, there are far less awkward moments that make me cringe. The guitar sound is great and the production in general is top notch. I think some of the bands finest tracks are on this album with Coma, Horrorscope, Live Young, Die Free and Soulitude topping the list. Overkill have released an amazing number of albums of the years (15 at last count!) but I see this as the highlight of a long thrashing career.

Say what you will about Overkill, there is no denying that group are some fast learners! After what I consider a very poorly executed debut record Feel the Fire in 1985, Overkill quickly made some adjustments on their follow up LP, Taking Over, and have been releasing some very solid thrash metal for the better part of over three decades. Of course, Overkill were at their best right around the time the big four "sold out" and is best remembered for albums like The Years of Decay and Horrorscope.

First and foremost, the production of the band's subsequent records has greatly improved. I have been very critical of some well regraded thrash metal debuts in the past for focusing more on the garage jam session, DIY approach as opposed to the ruthlessness of the grooves, tempos, blistering solos and soaring vocals. With Horrorscope, Overkill give us some of the cleanest sounding thrash metal at this time, and I could see why some metal purists may scold at the idea. Rest assured. the guitar riffage on "Infections", "Blood Money", "New Machine" and "Live Young, Die Free" is still crunchy, and Blitz's vocals are refined to an extent; very few shrieks that plagued the debut, but more attention to diction and flow. I will say that the lack of a dominant bass presence is a little disappointing, mostly near the final third of the album, but there is still a low end which gives the song the needed drive.

Of course, tight production as well as an overall tighter band can only get you so far. The real challenge is in the hooks and how well does this record linger after its conclusion. Well Overkill have always had a knack for some impressive thrash metal songwriting, even as far back as the debut LP, and Horrorscope is no exception. The traditional speed metal cuts like "Blood Money" and "Live Young, Die Free" still have great foundations to build off, while "Thanx for Nothin'" and "Bare Bones" are a very good one two punch before the album takes a breather for the title track. To go along with the final two songs on the album "Nice Day...For a Funeral" and "Solitude", the album has a good variety of styles; tempos, keys, modulation, as well as overall song formats, which keeps the album fresh and never feeling too long.

To be completely honest, I do not have much else to say about Horrorscope. In terms of the thrash metal aesthetic, Overkill managed to make something that was fun, heavy, mosh worthy, and recognizable; a feat very seldom achieved in thrash metal, even today. Unfortunately, Overkill seemed to milk this routine for the next thirty years and they have done very little to innovate. And at this point, I'm not sure they need to! Overkill deserve a seat at the table with Testament as one of thrash metal's most consistent outlet's, even if the music has become rather stale in recent years. For me, I still have to go with The Years of Decay as being a slightly more polished record, but Horrorscope is no slouch.

In the grander scheme of things, despite a career spanning nearly forty years and with my metal listening years fast approaching thirty, I only really started to get on with Overkill from about 2014.  White Devil Armory received enough praise amongst peers for me to give it a whirl when previous attempts to engage with the band had been unsuccessful due to me not instantly getting along with Bobby's vocal style.  Slowly but surely I began to unravel their vast and varied discography, picking my favourites and dismissing the less appealing releases over the past five or six years.

Horrorscope  sits atop the pile of favourites.  I find it one of the most consistent thrash metal albums in my collection if I am honest, perhaps even the most consistent of all.  Surprisingly for me it is not an album that goes near the extremity of my preferred end of the thrash spectrum.  The album is surprisingly accessible and catchy to find in my collection (considering that the likes of Condor and Sadus adorn my shelves as regular plays).  I am a sucker for real chuggin' riffs and that motor engine like efficiency to the riffs on this album just pull me right in.

In terms of the aforementioned consistency they maintain this for eleven tracks which is no mean feat.  Even the cover track doesn't trip the record up.  It just feels full of running still even as it draws to a close.  This was the final album before the groove elements started to creep into the band's sound and to be fair if you manage to achieve a great album like this then it is forgivable to try something new on future releases, although it wasn't as successful admittedly.  I hear melody on Horrorscope as opposed to any real groove influence entering the fray and it is on these more obvious melodic moments such as New Machine that the record loses a bit of entertainment unfortunately.  Not devastating but enough to keep the record away from a full five stars at least.