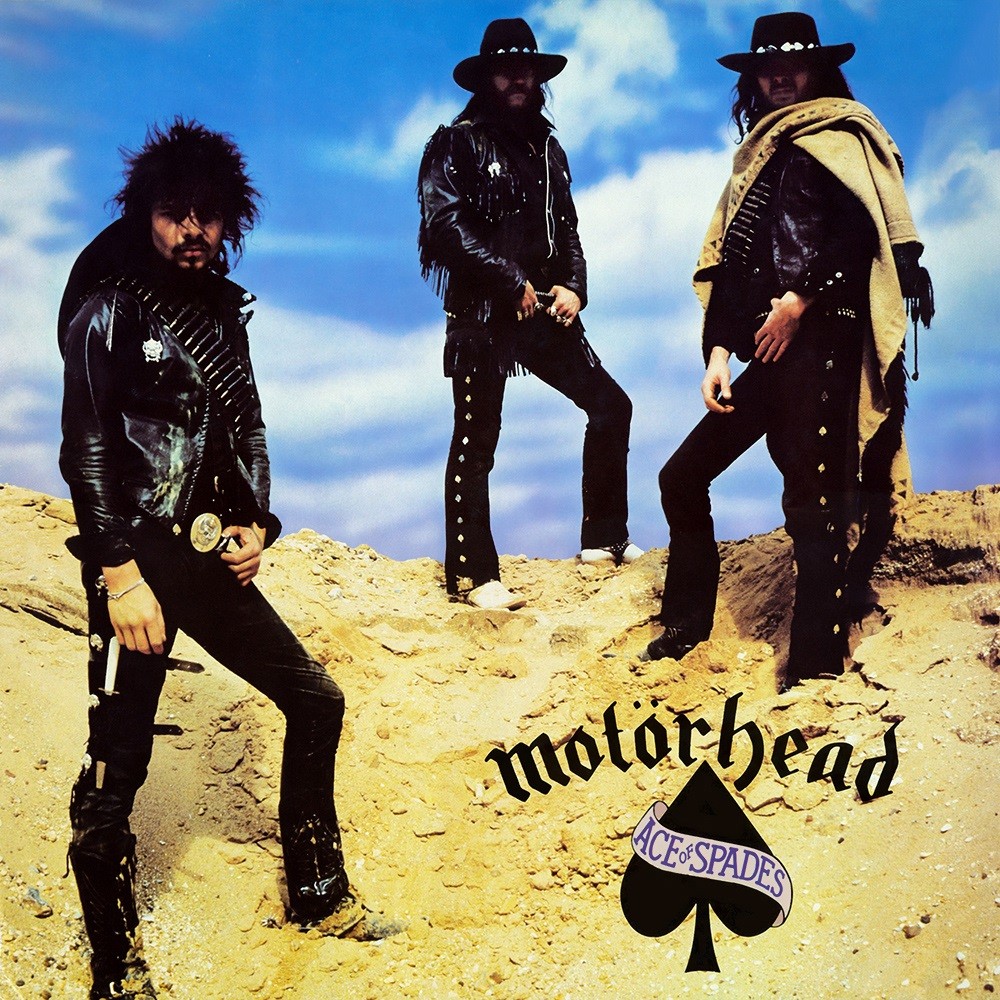 Five albums in and Motörhead actually were motoring.  On Parole aside the band was enjoying much success with their first three albums with Overkill and Bomber showing what the band were really capable of.  The established line up of Lemmy, Filthy and Fast Eddie had gelled together well and the momentum showed no sign of abating with the impending release of Ace of Spades.

The anthemic title track remains one of their best known songs to this day, but this record also has my personal favourite track, (We Are)The Roadcrew .  The rest of the album though is a bit of a mish-mash of full on speed metal paced rock 'n roll that doesn't all stick to the wall it gets flung against at near a million miles an hour.  Sticking to a tried and tested formula is all well and good and most definitely served the band well for the bulk of their career but here some tracks do just kind of pass you by.  Live to Win, Fast And Loose and Fire, Fire are particular victims of this despite the latter songs best efforts at a catchy chorus.

As much as I have played the hell out of this record, I never thought until today when I sat down to review it just how patchy it actually is.  I mean let's be clear here.  It is never terrible, in fact it doesn't stray into the territory of ever being bad even.  There's just a lot single tracks merging into one wall of entertaining yet very familiar sound. The album really needs a couple of more anthem like tracks to lift its stature that bit higher for me.

It seems almost bizarre to criticise a Motörhead album for following a set format and believe me, I ain't looking for no massive variety here just a bit more memorability.  After the lukewarm On Parole  the bar wasn't that high and I would argue that things didn't pick up again album wise until Orgasmatron some six years after this release.

Lemmy himself, before he decided to say "Fuck it," and take his skills on tour into the afterlife, said that Motörhead was never a heavy metal band. That might seem like an odd statement regarding a band that is pivotal to the genre to so many, but it always made perfect sense to me. For me, Motörhead's big appeal has always been that they so deftly and so naturally bridge the worlds of punk, heavy metal and rock 'n' roll, without confining themselves to any one sphere. It's the classic rock 'n' roll attitude, punk's endearing recklessness and heavy metal's razor-sharp edge, all married so well, and Ace of Spades is one of the albums that represents that in its purest, though not perfect, form.

It's a perfect summary of the Motörhead sound really, the soundtrack of a filthy, sleazy, smoke-filled, booze-fuelled dive bar and all the seedy, crazy goings-on that happen there. Its greatest strength is the consistency of this attitude, for there isn't really a true dud here, and the best offerings here are some of the best of even the full and extensive Motörhead catalogue.

So why only the 3.5/5? Well, as heretical as it might be to say it, it's because those best songs really overshadow the rest and can make a lot of the album feel fairly disposable. At its best, it's fantastic: "Please Don't Touch" is an irresistible groove, with Lemmy at his gravelliest. "We Are the Road Crew" is a true mantra to the rough and tumble of the crew on the road. "Love Me Like a Reptile" bouncy, almost boogie-woogie kind of riff is crazy fun, making you think of a tougher, darker Beach Boys. "Ace of Spades" is a fucking classic in every sense of the word, and there's nothing I could say that would properly convey the wild, raucous fun of it, nothing that you as a reader don’t, no doubt, already know.

But in all honesty, the rest of the album, while still consistent and enjoyable enough, doesn't measure up to those. It's a fun, punchy thesis on what Motörhead is all about, but I can't truthfully say I ever find myself reaching for anything but those above 4 tracks. Those are essentials, but that's just it: those are the only essentials here. If we're talking about the album as a whole (and we are), it's good, but a lot of it doesn't demand to be revisited as much as those classics songs that so perfectly capture the lightning in a whisky bottle vibe.

Choice cuts: Ace of Spades, We Are the Road Crew, Please Don't Touch, Love Me Like a Reptile