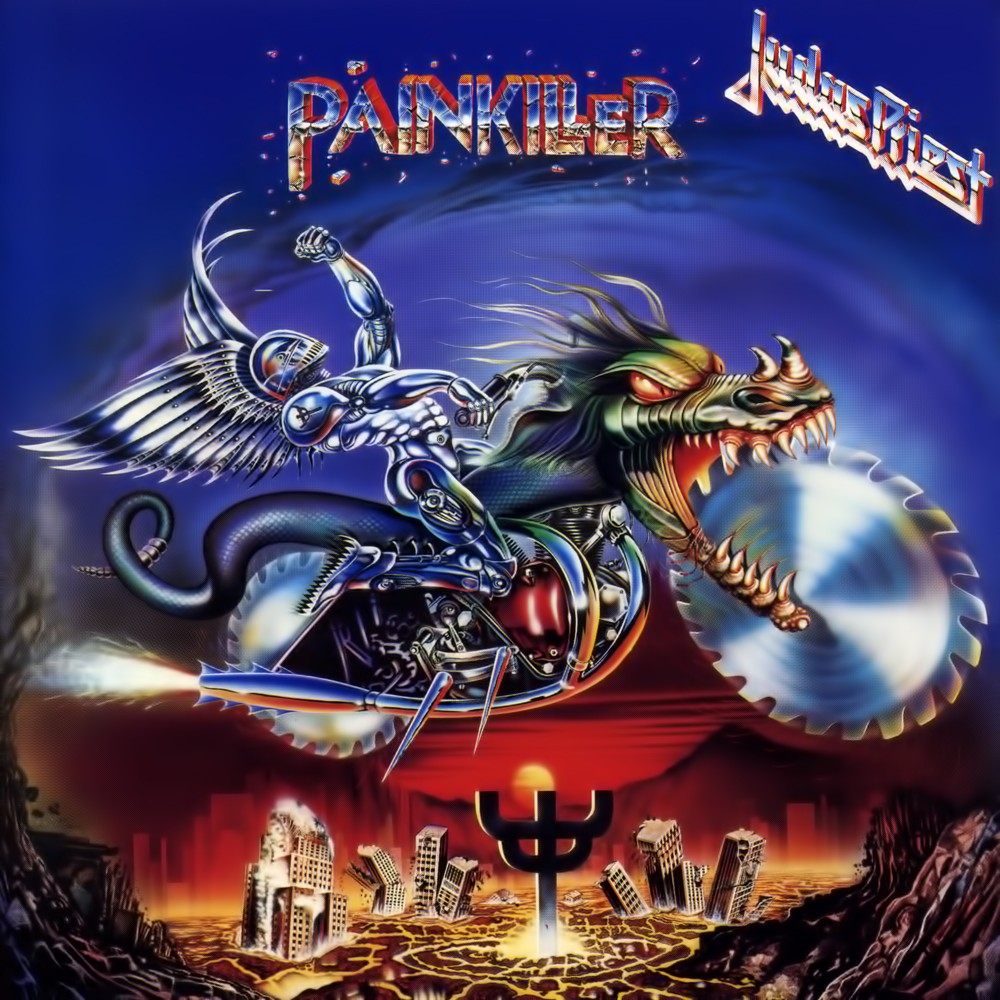 Painkiller. I don’t think anyone saw this coming from Judas Priest, one of the tamer metal bands, some 20 years into their career. I can’t imagine the insanity this caused when it dropped in 1990.

I can only look at it now. And now even now, it remains an absolute beast of melodic Speed Metal with more than a few of the genre’s most memorable riffs ever put to record. Halford’s iconic voice becomes a shredding cry here on a much different level than he had ever done before. The drumming flows into Power Metal territory with its constant double bass pummeling, and the guitars weave intense melodies that flirt with Thrash but lean more towards epic stylings rather than dark. And yet, the music and vocals are very aggressive, but almost upliftingly so. Perhaps triumphantly is a better word, as this album is a remarkable triumph of metal and indisputably Judas Priest’s finest hour.

Despite my particular preference for late 70's Priest (their trilogy from Sad Wings to Stained Class are seldom bettered by anyone) I can't deny that this is a slab of seriously high-octane metal thet merited a genuine sigh of relief after the execrable couple of albums preceding it. I still think it sounds over-produced, though.

When I hear talk of "Desert Island Discs" I find myself strugling to be able pull together 5 albums that I could take to this paradise of coconuts, sun, sea and CD's.  There's numerous options that jostle for a postion on that coveted list for me and it can change from hour to hour, day to day, week to week.  Some records however are mainstays; records so important to me and my development into metal music that they extend beyond mere entertainment value, extending their importance to almost life-affirming magnitude.

I hadn't heard much of any Judas Priest when Painkiller dropped.  Yes I heard tracks such "Living After Midnight" and "Breaking the Law" which I thought were okay but hadn't really set my world on fire.  Hearing that the band were dropping a new album in 1990 didn't invoke any real sense of urgency in me.  After all (based on what I had heard), Priest sounded more like rock music to me and weren't Sepultura, Slayer or Metallica in terms of my metal tastes of the time.  Back in the 90's here in the UK we had a metal show that broadcast on TV in the early hours of Saturday morning called Raw Power.  It was essentially the TV version of RAW magazine.  I avidly recorded it on our family video player ready to spend Saturday morning blasting the new tunes featured on there.  When they broadcast the video to the title track from the album it changed my life forever.

Here was the very embodiment of heavy metal in front of my very eyes and ears.  A frenzied attack of duelling guitars, relentless drums and shrieking vocals, all balled into a crushing sphere of rampant metal madness.  This sound was the very reason I had gotten into metal music and their look was the very epitome of how I thought all metal bands should look.  Equally resplendent in their leather and studs as they were in the authentic and mesmirising music that they played.

I rushed out and bought the record immediately, pulling together what limited funds I had to make a hasty but much needed purchase.  I simply had to have this record in my life.  The good news was that the title track set up the rest of the album perfectly.  There was no one-hit wonder present here.  The levels of intensity and energy were so high for the majority of the record that I literally lost pounds in weight thrashing around bedroom to it.  It wasn't just heavy metal in the raw and abrasive sense of the term, it was refined and delivered with a deftness that few other bands of the time could muster.  The repeat button on my hi-fi got a status of "on" everytime I put this album on.

What I find most astonishing about the album is that when this dropped in 1990 there were multiple other great releases for it to contend with from Pantera, Anthrax, Megadeth and Slayer yet it was Judas Priest (the oldest of the lot) that sat head and shoulders above the rest of the pack.  I would say that only Obituary's Cause of Death was anywhere near the briliance of Painkiller, but in terms of like for like styles/abums they were two very different beasts.

So there, you have it.  The last great Priest album and one of the most important metal albums of my life.  I hope they have a good stereo system on this desert island.