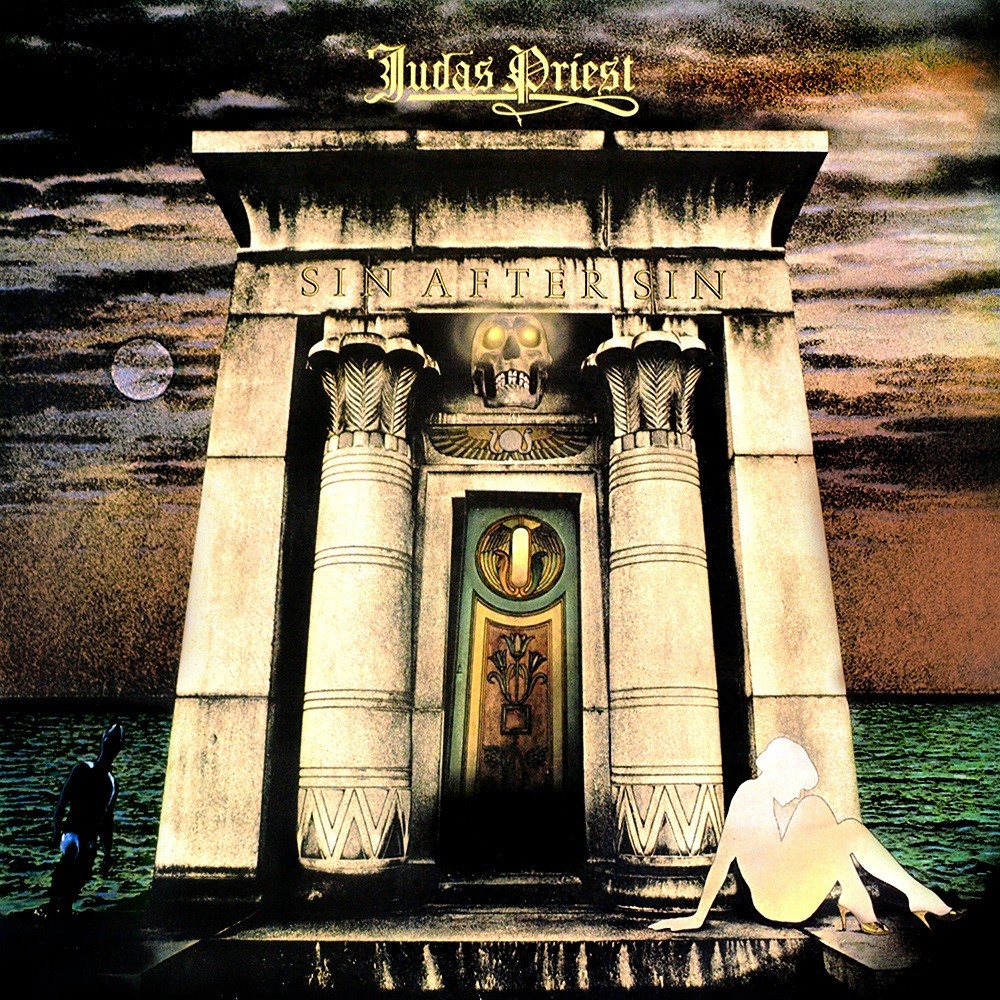 Finally breaking the mold. Though most disagree, this album trumps everything else Priest did in the 70’s and 80’s in my opinion. The first traces of speed and power metal show up in pummeling tracks like Starbreaker and Let Us Prey. The meanest, heaviest riffs ever put to record are shown off in closer Dissident Aggressor. And that cover of Diamonds and Rust is absolutely flawless, it remains my favorite Priest song.

Rob’s vocals are more aggressive than they have ever been and ever would be until the landmark Painkiller release, and they are indicative of the raw power of this record. Underrated and never given the credit it deserves as a game changing release for the band as well as the entire genre of Metal.

Sin After Sin was a Judas Priest record, that never really stood out to me too much. Even before picking it up to listen to it as a whole, there just weren't any notable singles on the setlist, one would come across just by letting Youtube autoplay or other forms of playlists have their way. Even in terms of the album's artwork, the album cover looks more like some 90's obscure death metal record than the band's typical iconography of mechanical beasts and rebel-lifestyle glorification.

As far as the music goes, it's fine, but it's overshadowed by Judas Priest's other material doing the same thing, but better. Sinner and Starbreaker are fine empowerment fantasies, but in retrospect perhaps too formulaic in structure and their highlights. Last Rose of Summer and Here Come the Tears are the softer entries on the record. The former being a Led Zeppelin-esque ballad, while the latter - and in my opinion superior song - is an honest expression of self-pity and loneliness. Let Us Prey/ Call for the Priest stands out as an upbeat song and while good, still gives me the feeling like it's more of an template for better songs to come on later records with better production and more notable instrumental and vocal delivieries (most notably I always feel like the song is about to transition straight in to Exciter, a staple of Judas Priest's next record Stained Class). I guess my favourites of the record are the Joan Baez cover of Diamonds and Rust for it's well functioning hook in the melody, as well as track #8 Dissident Aggressor.

So overall Sin After Sin is not a bad record, but it's definetly overshadowed by other entries in Judas Priest's discography.

I quite enjoyed the first two Judas Priest albums. As an early teenager I was introduced to Priest’s 70’s material through 1976’s “Sad Wings Of Destiny” & I subsequently ventured further back to their 1974 debut “Rocka Rolla”. The debut may not have been terribly ground-breaking but it was a very solid piece of 70’s hard rock performed by some more than capable musicians & I found its honesty & warmth quite endearing. “Sad Wings Of Destiny” had lifted the bar higher as the band moved further into heavy metal territory & better utilized the weapons in their arsenal. I can’t say that I truly loved either record but they were undeniably high quality releases. I’m just not sure that “Sad Wings Of Destiny” is deserving of all of the praise that has been heaped upon it over the years.

1977’s “Sin After Sin” album followed a similar musical direction to “Sad Wings Of Destiny” really but you can see the evidence of the band pushing ever further from their hard rock roots. The twin guitar attack is becoming more & more prominent & Rob Halford’s vocal style more defined. The guitar sound is still built firmly on 70’s hard rock so younger metalheads may find things sounding a little tame for their liking but the riffing style is undeniably more shredding than bands like Deep Purple & Led Zeppelin. The production again suits Priest’s sound very well. All of the instruments sit nicely in the mix & there’s plenty of separation. Rob Halford is a true metal superstar by this stage & is the driving force of the band but the rest of the guys have formed a really solid unit. No one overplays their hand. Everyone seems to be focused on what is best for the songs rather than any sort of personal fame.

“Sin After Sin” has always seemed to me to be a bit of a sandwich in terms of song-writing quality. The album starts off very well. Opening track “Sinner” presents the blueprint for dozens of singalong metal anthems in future years with its simple single-word title & catchy hooks. Things take a further step up with a very interesting cover version of a gentle Joan Baez folk song called “Diamonds & Rust”. This version sounds nothing like the original. Priest’s interpretation is far more substantial & memorable in my opinion. Rob has done a fantastic job with the chorus & it’s difficult to remove from your head once it’s found its way in. “Starbreaker” is another of the simple anthemic singalong metal tunes Priest would become known for. Then we move onto a very commercial sounding ballad in “Last Rose Of Summer”. This is where things start to fall apart in my opinion. I find this song to be overly cheesy & it doesn’t really fit in with the rest of the album. It’s immediately followed by “Let Us Prey” which I find to be lacking a bit of intelligence. It’s an uptempo Deep Purple-style fist-pumper that features quite a bit of melodic lead guitar but I just don’t think it sounds sophisticated enough for my liking. Thankfully things pick up from there though with a much classier & expansive effort in “Call For The Priest/Raw Deal”. “Here Come The Tears” is a power ballad in the true sense of the term. It hints at some of the commercialism of “Last Rose Of Summer” before taking a much more powerful & captivating route. Well then… now that we’ve gotten through all of that material we can talk about the real star of the album. Closer “Dissident Aggressor” is a massive step up. Not just for Judas Priest but for heavy metal as a whole. It’s substantially heavier than anything we’ve heard from Priest before & the riffing style is simply savage. Rob puts in an epic display. This song is easily amongst Priest’s best material & it’s significance to heavy metal in the 1970’s cannot be underestimated.

Overall I find “Sin After Sin” to be another enjoyable Judas Priest album that shows off all of the elements that make for a truly great heavy metal record but it doesn’t quite get there in my opinion. The slump in the middle of the album really lets it down & I find that I actually prefer the previous two Priest records to this one. Tracks of the quality of “Dissident Aggressor” & “Diamonds & Rust” make it blatantly obvious that this is a great heavy metal outfit but I don’t think they had hit the level of consistency I had hoped for just yet.