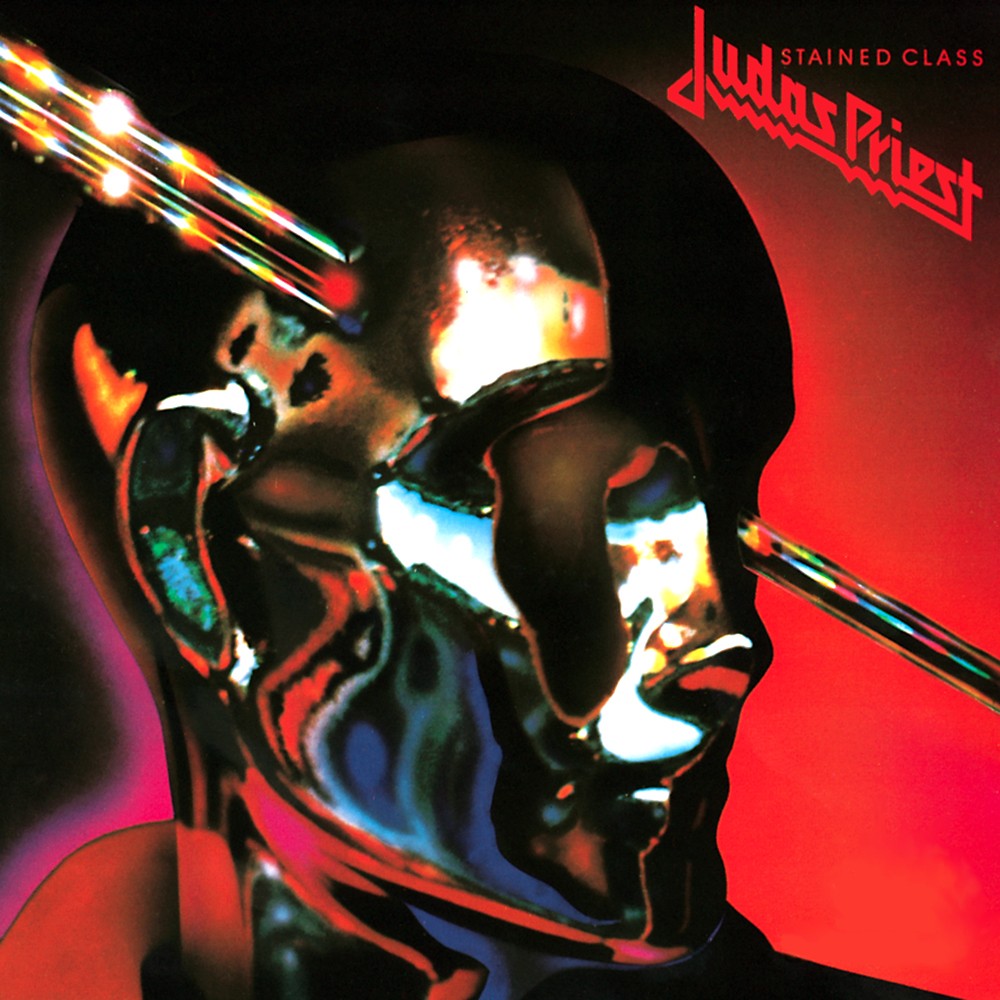 I had mixed feelings about Judas Priest’s third record “Sin After Sin”. There were some great moments but a couple of disappointing songs in the middle of the album meant that I probably didn’t enjoy it quite as much as the previous two Priest records. I was happy to hear them taking further baby steps towards the sound we now know as modern heavy metal though. The albums closing track “Dissident Aggressor” really showed us what could be achieved with dark & heavy riffs so 1978’s follow-up album “Stained Class” had a great opportunity to capitalise on that groundwork.

Priest’s sound hasn’t changed dramatically on “Stained Class”. In fact it was very similar to the one they showcased on “Sin After Sin”. On the positive there were no overly cheesy ballads like “Last Rose Of Summer” this time. The dual guitar attack was probably more potent than ever & Rob Halford’s vocals soared ever higher as he continued to gain in confidence. The guitar sound is still more firmly grounded in 70’s hard rock than heavy metal. It was probably their heaviest record to that time but a lot of that has to do with the style of the song-writing than the actual sound. They still hadn’t quite reached full blown metal status at that stage in my opinion.

Opener “Exciter” is a fast & energetic rocker that yet again shows off the band’s Deep Purple influence. The opening drum intro definitely hints at the classic “Painkiller” intro that was still twelve years away. “Exciter” is very typical of the type of opening tracks Judas Priest would go with in later years. It’s fast, simple & anthemic. Things continue well for the next few tracks with the cover version of late 60’s blues rock act Spooky Tooth’s “Better By You, Better Than Me” being particularly impressive. Priest have once again chosen to cover a tune that was by no means an obvious choice & have truly made it their own. In fact I think it might just be my favourite track on the album. Other highlights include the epic power ballad “Beyond The Realms Of Death” & the bad-ass riffage of closer “Heroes End”. The only track that I’m not overly keen on is “Invader” which once again sits right in the middle of the album. It just seems to be a bit light-weight & flat to my ears which is a shame because it’s really the only blemish on an otherwise fairly consistent tracklisting.

“Stained Class” is yet another solid release for Judas Priest. I probably rate it just slightly behind “Sad Wings Of Destiny” in terms of overall quality but once again I find myself struggling to say that it’s anything life-changing. Perhaps early Priest is just a little simple & tame sounding for someone who was raised on extreme metal like myself. It’s undoubtedly a fun listen but do I find myself craving the intensity of later albums like “Painkiller”. I don’t think the highlight songs are quite as strong as earlier classics like “Victim Of Changes” or “Dissident Aggressor” either & I think this is probably what stops me from rating it a little higher. On the positive side I have to admit that it’s as consistent a record as anything Judas Priest had released to that time & I subsequently find myself enjoying it slightly more than albums like “Rocka Rolla” & “Sin After Sin”.