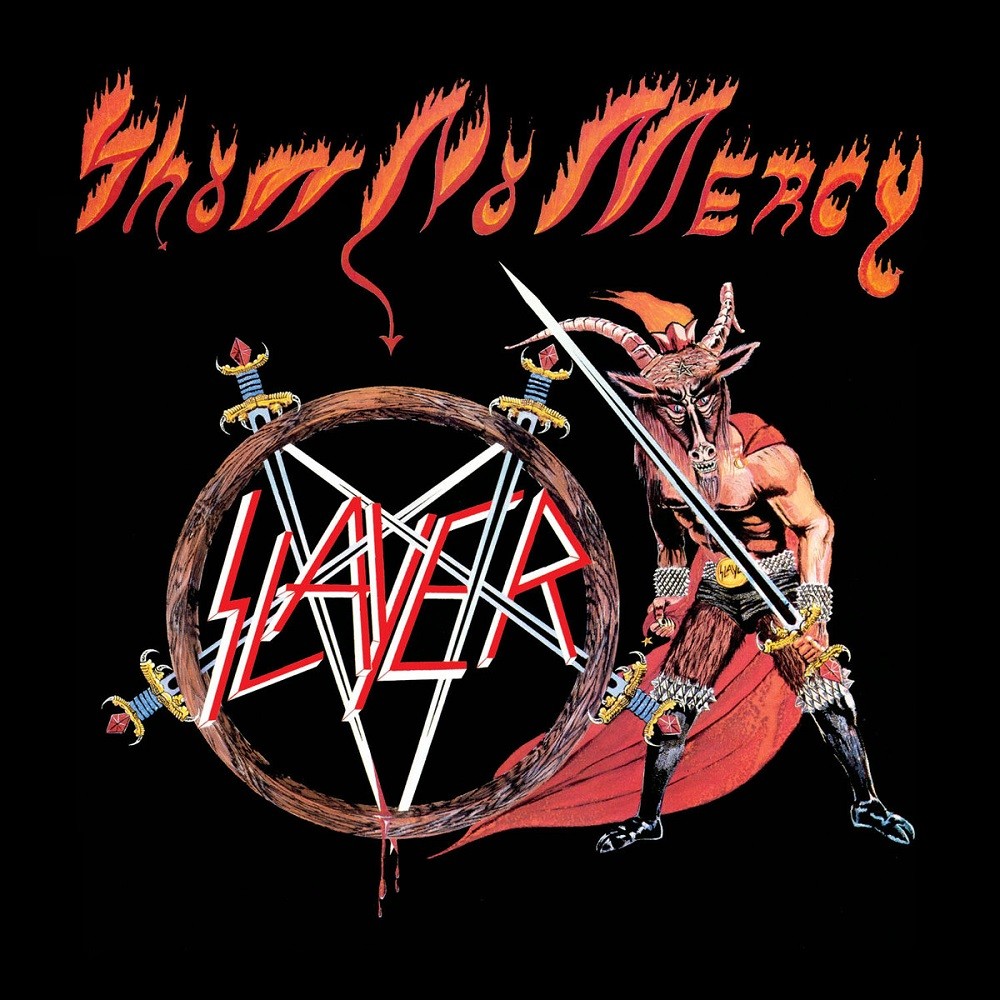 I’ve always loved Slayer, this album being among my favorite releases by them, but it becomes so much more amazing when compared to the contemporaries at the time. Absolutely nothing was this insane – not even close.

Speed? We had Metallica, but they’d only go into overdrive on a couple songs – and even then, it never matched Slayer. Tremolo guitar picking has never been this fast. And Dave’s drumming was something else. The speed and technique of the drumming here had never been seen in metal before. I’d guess only some Jazz and the best Prog Rock drummers had the level of chops Dave put on this album back in 1983.

Riffs? Hell no. You think Paranoid had great riffs? Number of the Beast? They were all lacking something. Slayer doesn’t just deliver riffs – they deliver evil riffs. Wailing, screaming guitars walked the line between melodic and chaotic, bringing a perfect harmony of very catchy riffs and a dark, harrowing mood. No music sounded this dark and melodic at this time; any other bands attempting the evil schtick relied on purely being noisy and chaotic with little technique (Venom, Hellhammer).

And then there’s the vocals. Not just the style, but the delivery. Tom’s trademark yelling here has become something often imitated, and I daresay it was many people’s introduction to harsher vocal styles. Tom was not the first to employ a harsh vocal style (Venom, Black Flag), but he absolutely did it better than anyone else at the time. He brought just the right amount of melody to the table; he can hit notes, and his words are very intelligible. Despite that – or perhaps, because of it – his bark comes off as much more convincing. As opposed to the flat screaming or growling of bands like Hellhammer and Venom, you could discern emotion in Tom’s voice, and that emotion was anger, hatred, a general misanthropy and dedication to the dark arts. That delivery carries over to the lyrics – again, Slayer were not the first to write Satanic lyrics. Venom mostly started that, but they didn’t take it too seriously. Slayer, along with King Diamond, were really the first band to convince you that those lyrics about Satan, murder, and black magic were genuine. Of course they weren’t, but damn was Tom’s fierce, rabid bark convincing.

Back in 1983, there were absolutely no albums that matched this. Any other album that had traits of what makes this great was missing something else, whether it be the speed, aggression, technique, or mood. Slayer was the first band to unite these qualities in a way that would spawn a staple style of dark metal carried on by thousands of bands.

Even after listening to hundreds of albums that were released pre-1983, Show No Mercy remains chronologically my earliest 5-star release, and nothing up until that point in music has come even close to instilling in me the sense of awe as Slayer did with their debut.

Has a fair dash of speed metal, but Show No Mercy raised metal's aggression bar and put Slayer on the map.

Slayer!!! That single word can get the most extreme reactions out of thousands of metal fans all over the globe. More often than not you’ll be confronted with roars of aggression combined with dual devil horn gestures as soon as word has left your mouth. Yet just as with all great bands, Slayer had to start somewhere and their humble beginnings originated way back in 1981. When guitarists Kerry King and Jeff Hanneman met while auditioning for another band, they saw in each other a kindred spirit and immediately decided to form their own metal band. King had previously played with bassist/vocalist Tom Araya in a band called Quits (aka Tradewinds) and knew he was the man they needed to fulfil their vision. All they needed was a drummer and miraculously they’d find one the day Dave Lombardo delivered a pizza to King. One can only imagine how that knock on the door ended with Lombardo becoming part of Slayer, let alone considering the chances of discovering one of the finest drummers in metal by blind luck. King, Hanneman, Araya and Lombardo hit clubs and parties performing Iron Maiden and Judas Priest covers as within just a few months of forming. Despite many sites suggesting the band were initially called Dragonslayer after the 1981 movie of the same name, the band have always denied that this was ever the case.

In mid 1982, the Slayer members attended a Metallica concert which inspired them to play faster and heavier music. To do so, they would need to produce their own tracks and their live performances started to combine the usual covers with their own original creations. Even at these very early gigs, Slayer brought with them satanic imagery such as pentagrams, spikes and inverted crosses, and it was King that instigated these props as a way of catching people’s attention. It worked too, as at one of these gigs, opening for Bitch at the Woodstock Club in Los Angeles, Slayer were spotted by Brian Slagel, the founder of Metal Blade Records. Slagel was very impressed with what he saw and met the band backstage to ask them if they were interested in recording an original track for his upcoming Metal Massacre III compilation. The band agreed and their Aggressive Perfector recording opened the compilation when it was released in July 1983. The response was extremely positive and Slagel offered Slayer a recording contract with Metal Blade shortly afterwards. Unsurprisingly, given the small scale of the label at the time, there was no recording budget, so the band had to self finance their debut album by combining Araya’s savings and money borrowed from King’s father. Show No Mercy was recorded in November 1983, apparently in one session between 11pm and 7am so as not go over their limited cash collection.

This insanely quick recording of course resulted in a less than perfect production, but it didn’t stop the band laying down ten tracks of dark, youth fuelled metal. Just as with Metallica’s Kill ‘Em All debut, Show No Mercy is a raw yet energetic album that displays the band’s influences far more than future releases. While Metallica certainly played their role in forming this sound, it’s not difficult to hear Venom, Judas Priest and Iron Maiden at various times throughout the album. The satanic aspects scream of Venom and yet Show No Mercy held far more conviction than the pioneering Brits who never seemed to take things very seriously. A lot of Show No Mercy simply sounds like sped up Judas Priest and Iron Maiden with less focus on melody and more on unbridled aggression. I guess it shouldn’t be that surprising how much of these classic bands crept into tracks like Metal Storm, Tormentor and Final Command when you consider their origins, but this traditional heavy metal facet would all but disappear by the time Hell Awaits arrived a couple of years later. The highlights of the album however have much more in common with Slayer’s later purely thrash metal albums and The Antichrist, Die by the Sword and Black Magic are still part of Slayer’s live performances today which is testimony to their importance and quality.

Araya’s vocals certainly contain a malevolent edge throughout despite regularly launching into high pitched heavy metal squeals. On tracks like Antichrist and Black Magic he sounds genuinely possessed and while it’s true that he’d gain much more power and control on future albums, his manic performance here only adds to the dirty, raw tone of Show No Mercy. Opener Evil Has No Boundaries is thankfully the only time you’ll hear gang vocals in Slayer and yet it’s hard not to enjoy them when you picture the band along with Gene Hoglan (legendary drummer who was a roadie for Slayer at the time) yelling “Evil” at the top of their lungs in the studio. Lombardo either doesn’t get the opportunity to show the extent of his talent here or he was still developing at this early stage into the staggeringly good drummer he would become. His work on this debut is merely adequate and not helped by the lacking production. King and Hanneman do however come up with the goods and while their NWOBHM tendencies here pale in comparison to the intense thrash destruction to come, they display no shortage of ability and the beginnings of the exhilarating dual leads that would become their trademark are apparent. Show No Mercy is far from perfect, but when you put it in the context of 1983, there’s just no denying its significance.