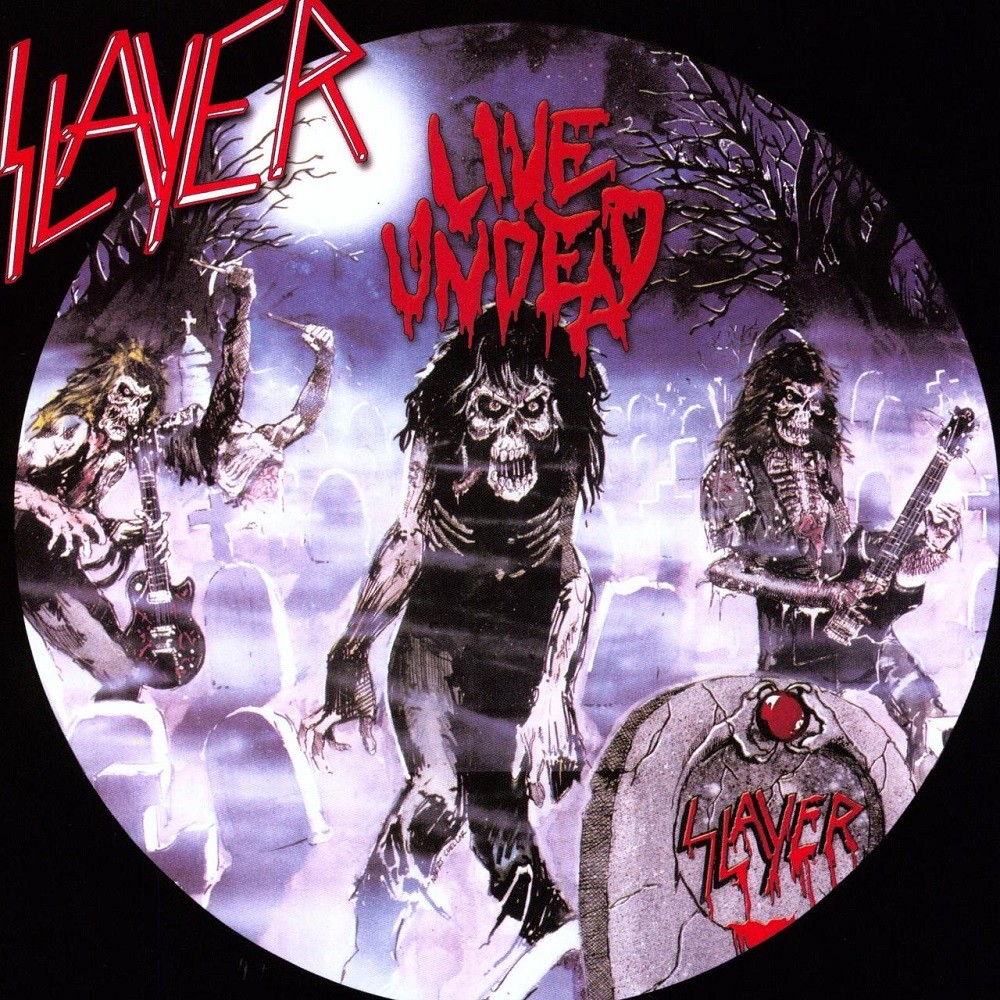 1984 was a huge year for Slayer fans. Not only did we receive the classic "Haunting The Chapel" E.P., but Metal Blade Records also felt the need to put a live release out to showcase the sheer violence & electricity of a live Slayer show. It would be recorded in New York City but as with Warlord’s “And The Cannons Of Destruction Have Begun…” live album they'd released only a month earlier, Metal Blade had unusual ideas on how it would come together, not feeling any necessity for the record to reflect a truly live club show. The Warlord record was advertised as having been recorded in an empty theatre & was billed as the very first Warlord live show which ended up being completely inaccurate as it eventually came out that the whole thing was put together in a recording studio & was poorly mimed for the accompanying video that came with the album. Well the circumstances around the recording of Slayer’s “Live Undead” E.P. have a few more unknowns about them & it’s really up to the listener as to how much they let these effect their overall enjoyment of the record.

For starters, we know that this isn’t a legitimate live show. The band’s management have been open for many years about the fact that it was recorded in a studio with 50 friends of the band in attendance to add the audience noise. But what’s not 100% clear is whether that audience was in the same room at the same time that Slayer performed this material or whether they were simply screaming their heads off for the fun of it & inserted at a later stage. From the hints that producer Bill Metoyer has given in interviews it sounds like he wants us to believe that the crowd were in the room with the band but the audience noise didn’t get picked up well enough in the recording so it was re-recorded & pasted over the top of the band. This makes sense to me on the evidence on display on the recording so I’m gonna go with that story & I’d imagine that our audience will be a little divided about whether they can accept this as a genuinely live recording under those circumstances or not.

The other major talking point is the necessity to put out a live release at all given that Slayer had such a small amount of material at the time. I mean the original release of “Live Undead” featured six songs; five of which appeared on their debut full-length “Show No Mercy” from the previous year & the other one having seen the light of day only two months earlier with the “Haunting The Chapel” EP. And when you take into account the fact that these arrangements are all very similar to the originals & recorded in a studio it begs the question on what the point of the whole exercise was. Apparently the six songs that made it to the record were selected from 19 that were recorded in total across three sets that included a maximum of nine different songs with the tracklisting being completely out of order from their usual live sets.

Well……. now that we’ve got that all out of the way, it’s lucky for me that I’m able to see past all of those topics pretty easily & I subsequently  find “Live Undead” to possess some unique characteristics that make it an essential part of any Slayer fanatics collection. One of the bigs pluses is that the production is excellent for a "live" release. It really showcases the electric energy of a live Slayer with all of the instruments being well defined. The two guitarists sit at either side of the stereo spectrum & achieve tones that are both raw & chaotic & searing & modern at the same time, with the solos being presented in emphatic fashion. Tom’s bass guitar can actually be heard which is more than I can say for many Slayer studio outings & he sounds thick of warm here. And Dave Lombardo’s drum kit sounds more powerful than we’ve heard from him to date with a kick drum sound that went a long way to defining the path forwards for extreme metal. There’s more click to it than we'd heard previously which makes it more defined & gives the rhythms more precision. In fact, Lombardo’s performance is a big differentiator for “Live Undead”. His ability behind the kit at this stage in the game is simply light-years ahead of where it was for “Show No Mercy” & this gives these songs more life than they had previously. Particularly due to the drastically improved double kick work which is a real highlight & gives the songs a lot more urgency than they had previously.

The only “Haunting The Chapel” track included is “Captor Of Sin” & it benefits greatly from the cleaner production afforded over the original recording. Tom’s vocals are harsher & more evil sounding than they were on “Show No Mercy” & you would honestly never know that this wasn’t a real live club gig on the evidence of his performance as he genuinely seems to be interacting with the crowd. I actually think this performance places him way ahead of the rest of the thrash front men metal fans had experienced to the time. His ability to balance sheer aggression with melody is unparalleled & his between-song banter is totally bad-ass & would definitely leave a live crowd riled up & ready to attack each other. The sound of the audience certainly leaves you feeling like they actually do too. These dudes sound like complete psychos throughout the recording & that’s pretty much in line with what my teenage self always imagined from a Slayer club crowd. If you want to hear what Hell sounds like then this is as close as you’re gonna get with the audience being mixed a little louder than you’d usually expect for a live release which seems to be a bit of bug-bear for some listeners but personally I really enjoy it & think it gives the E.P. a unique character.

Perhaps the fact that I was introduced to “Live Undead” before I’d ever heard “Show No Mercy” or “Haunting The Chapel” has had an impact on my overall feelings on this release but I have to say that I fucking love it. In fact, I’d go so far as to say that it just slightly eclipses “Haunting The Chapel” for my favourite Slayer release to the time. I honestly couldn’t give a fuck about how the recording came to be. I didn’t have any idea of those circumstances when I first became acquainted with “Live Undead” & I’m not sure it would have made a difference anyway. I just base my judgements on the music coming from those speakers & the way it makes me feel & on that basis alone it’s hard to deny that “Live Undead” is a showcase for the elite thrash metal of one of the greats of the genre when they were just hitting their straps. I’ll never get the opportunity to see them at this early stage of their career but this E.P. serves as a very nice insight into what a live Slayer experience might have been like at that point in time.

A bit of a grab for cash by Metal Blade, but too much early period Slayer is surely never enough.

If it wasn’t already apparent that Metal Blade owner Brian Slagel wanted to make the most of the burgeoning popularity of Slayer after the rushed release of the Haunting the Chapel EP, it certainly was three months later when Live Undead was released. Producing a live album for a band that has only one full length album to their name seems a bit superfluous in general, but to do so with rehearsal material rather than an actual concert just screams of greed. The Live Undead performance was played in the studio with a bunch of the bands friends in attendance and considering this fact was not mentioned anywhere on the album sleeve, it’s hard not to feel a little bit cheated. Still, this is Slayer we’re talking about and it’s very hard to refuse anything related to these guys from their early golden years. One look at the track listing and you realise that one full length album and an EP was more than enough for Slayer to have enough great material to fill a punishing set list. With tracks like Black Magic, Die by the Sword, The Antichrist and Captor of Sin already under their belt, the quality of the music itself was never going to be of concern.

The main thing that blights my enjoyment of Live Undead is the hooligans Slayer chose to hang out with. You’d think that the small scale environment would mean that audience participation would be negligible, when in fact the opposite is true. Whoever these dudes were crammed into that New York studio, they fucking loved Slayer! They scream and shout at the top of their lungs the entire time and from the crazed manner of these hollers, one can only assume there were several cases of beer consumed that day. I must admit that I often get frustrated with live albums where crowd involvement is limited to the short breaks between tracks and then entirely cut from the mix for the rest. Surely this technique isn’t the best way to give an indication of what experiencing a live concert is really like is it?! Well, listening to Live Undead is all the explanation I need for why bands and labels often use this method, as I seriously just want these guys to shut up. Their distracting whistles, screams and calls of Ssslllaaaayyyeeerrr are constant throughout the recording and really start to get on my nerves quickly. Anyway, I’ve whinged about that enough, what about the music.

Even at this very early stage, Slayer was a damn tight unit. Most tracks sound almost identical to the album versions, which is testament to the talent of the band. Araya spits his vocals out with serious conviction and aggression, giving a few of these tracks extra brutality that was perhaps missing on the debut. Of course the production is not fantastic and pales in comparison to the massive Decade of Aggression release that would arrive some seven years later, but everything is perfectly audible throughout if you ignore the possessed morons screaming in the background that are recorded at the same volume. Sadly Chemical Warfare is not included in the set, which makes me sad. The studio version did end up making an appearance on the CD version of Live Undead, which was released in 1987, but as incredible as that track is, I must question this decision given that one studio track stuck on the end of seven live ones stands out like Kerry King at a ballroom dancing competition. In the end I guess too much early Slayer is never enough, but Live Undead is certainly the least essential disc from this period.