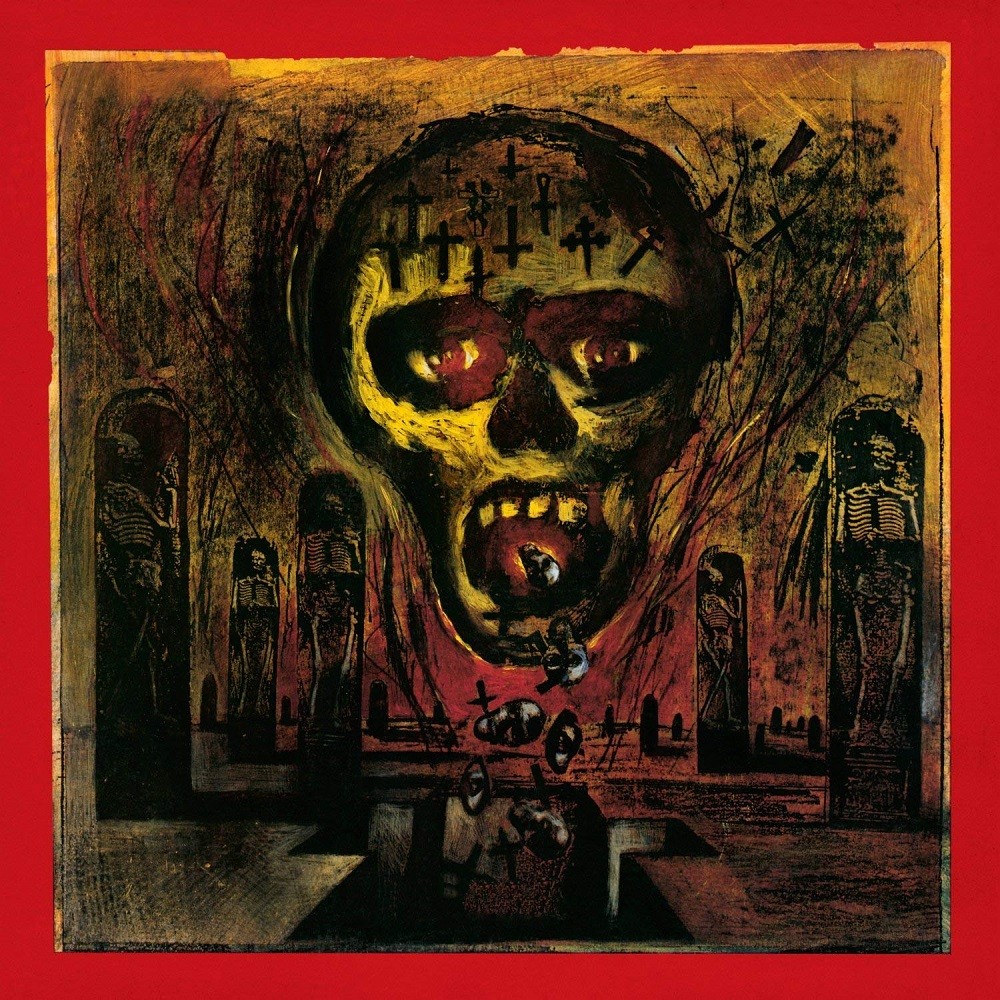 An amalgamation of all the things that make Slayer great and sadly, their last classic release.

Slayer’s previous release South of Heaven copped some criticism for lacking the energy and passion that the band had always been renowned for. While I personally found its slower, more melodic approach to be exactly what was needed after the outstandingly intense Reign in Blood, there’s no doubt that this disparagement caused the band no small amount of concern. It must have been tempting to ignore their recent venture and just reapply the Reign in Blood template all over again, but thankfully Slayer knew that wasn’t the answer that would give them a lasting relevance in the metal scene. In the end they decided to combine both approaches into a hybrid cocktail of Slayer’s finer elements, while maintaining the professional production and packaging that had worked so well in recent years. The result is that Slayer’s fifth full length album has it all, encapsulating everything great about the band, with mid-tempo melodies and grooves regularly injected with spurts of all out aggression. The album also amalgamates the lyrical themes of all their previous work, containing both the King/Hanneman driven satanic subject matter from their earlier material and the later Hanneman/Araya produced explorations of war, violence and death.

Yet, despite all the above efforts to mix the old with the new, there are various elements that required no alterations given their proven success. Released on October the 9th, 1990, Seasons in the Abyss was Slayer’s third major label release, with the same thriving line-up and recording team involved. Once again produced by Rick Rubin and Andy Wallace, the production is clean and powerful, with plenty of attention given to all performers. The album also continues the Slayer tradition of leaving next to no time between each track to the next, giving the whole forty plus minutes a continuous breathtaking flow, a facet they’d first instigated on Reign in Blood. There’s no doubt that at this stage of their career, the band put a lot of effort into making sure that their albums had a consistent quality and that each track was memorable in a positive way. The true reward comes in the live environment when thousands of fans go nuts after just the first note, chord or beat of the next track, before singing along to every word without ever deliberately learning them. I doubt there are many Slayer fans out there that couldn’t pick War Ensemble, Dead Skin Mask or the title track within the first five seconds, which is testament to their distinctive qualities.

Of note from a lyrical point of view are Dead Skin Mask, which was inspired by serial killer Ed Gein, and Expendable Youth, which covers gang wars and violence, but overall there are numerous topics covered without shifting the overriding tone of the album. Araya continues to improve his vocals and actually “sings” a lot more on Seasons in the Abyss, as opposed to the rabid, hollering that coated the band’s earlier material. Hanneman and King do exactly what they do best with the duo cranking out amazing Slayer riffs like they have an endless supply, and their combination with Lombardo’s awe-inspiring drumming never fails to deliver the goods. Unfortunately, this musical combination didn’t always result in smooth band unity, as would be apparent when Lombardo left Slayer due to conflicts over his hesitance to commit to long tours. However, the track Temptation does prove that internal disagreements do occasionally result in positive outcomes. The band never intended for the dual vocal lines that make up the verses so effectively. King and Araya disagreed on how the vocals should be done for the track, so they decided to record both versions before deciding. The result you hear on the album happened by accident after the first vocal track was not erased between takes but was kept for its haunting effect.

The ironic thing about Seasons in the Abyss is that after the backlash that South of Heaven received for not being brutal enough, it’s the lengthier and slower tracks on its follow-up that are generally considered the highlights. With the exception of the superb opener War Ensemble, it’s the more restrained Dead Skin Mask, Expendable Youth, Skeletons in Society and the huge closing title track that are the most memorable on the album, with the shorter, faster ones not making as much of a lasting impression. That being said, the rapid-fire Blood Red, Hallowed Point, Temptation and Born of Fire certainly contain the energy some of their fans missed on the predecessor, perhaps sating the desire for blood that burns within their average listener. Regardless, there really isn’t anything to complain about with Seasons in the Abyss. There are no fillers to speak of and no production issues holding it back. The mixture of old and new, and slow and fast, Slayer elements was a conscious effort by all involved and it paid off in a huge way. Fans and critics alike consider this polished and varied album to be the most rounded and complete of Slayer’s existence, if not as impactful as Reign in Blood. This is the last classic Slayer album and despite them finally getting the original line-up back together, I don’t think that’s likely to change.

1990 was a good year for metal.  Perhaps one of the more memorable ones for my time listening to metal over the past 30 years.  I spent hours as a teenager with this record and it remained my only exposure to Slayer for the best part of 3 years.  As such, its an album that holds massive nostalgic value for me and whilst it will never rival South of Heaven or Reign In Blood as my overall favourites from the discography it does offer some quality tracks and is one of the few albums I can play through track by track in my head.

As has been alluded to in other reviews, this was probably the last great Slayer record.  It it still had all the epic speed and intensity that had by now become standard offering for the group but it also offered real shows of maturity in terms of songwriting with a couple of tracks in particular standing out as picks from the record.  To start with, opening track War Ensemble is a classic Slayer track, full of rampant urgency and pressing persistence.  From the opening riff there's little time to draw breath and by the time it is over the doggedness of Blood Red continues the album's relentless opening salvo.  To open an album with such a sense of cruciality is bold as there is no intro, no building of atmosphere, just straight up head off and shit down your neck intensity.

Things take a more atmospheric turn with the brilliant fifth track Dead Skin Mask, with it's spoken word dialogue uttered over a molesting and mauling riff.  The child calling out towards the end of the track scared the living shite out of me as a teenager as the track played out a grisly homage to serial killer Ed Gein superbly.  It remains one of my favourite Slayer tracks to this day for its fine mix of atmospheric horror and macabre storytelling.

Things get right back to the weapon's grade levels of intensity with the barnstorming Hallowed Point with riffs literally crashing in and taking the face off anyone in striking distance.  For me though, after the catchy Skeletons of Society the album does go a little off the boil with Temptation feeling a tad clumsy in comparison to the rest of the tracks.  After the evilness of Born of Fire we get to the crowning glory of the album as the title track makes for a momentous closing to the record with six and a half minutes of well constructed thrash metal that builds like a doom track to start before going off into a vast and familiar Slayer soundscape.

It really only is the small lull towards the end of the record that keeps that remaining half star off the rating here, otherwise this is a perfectly constructed and masterful thrash record that sometimes gets unnecessary bad press.