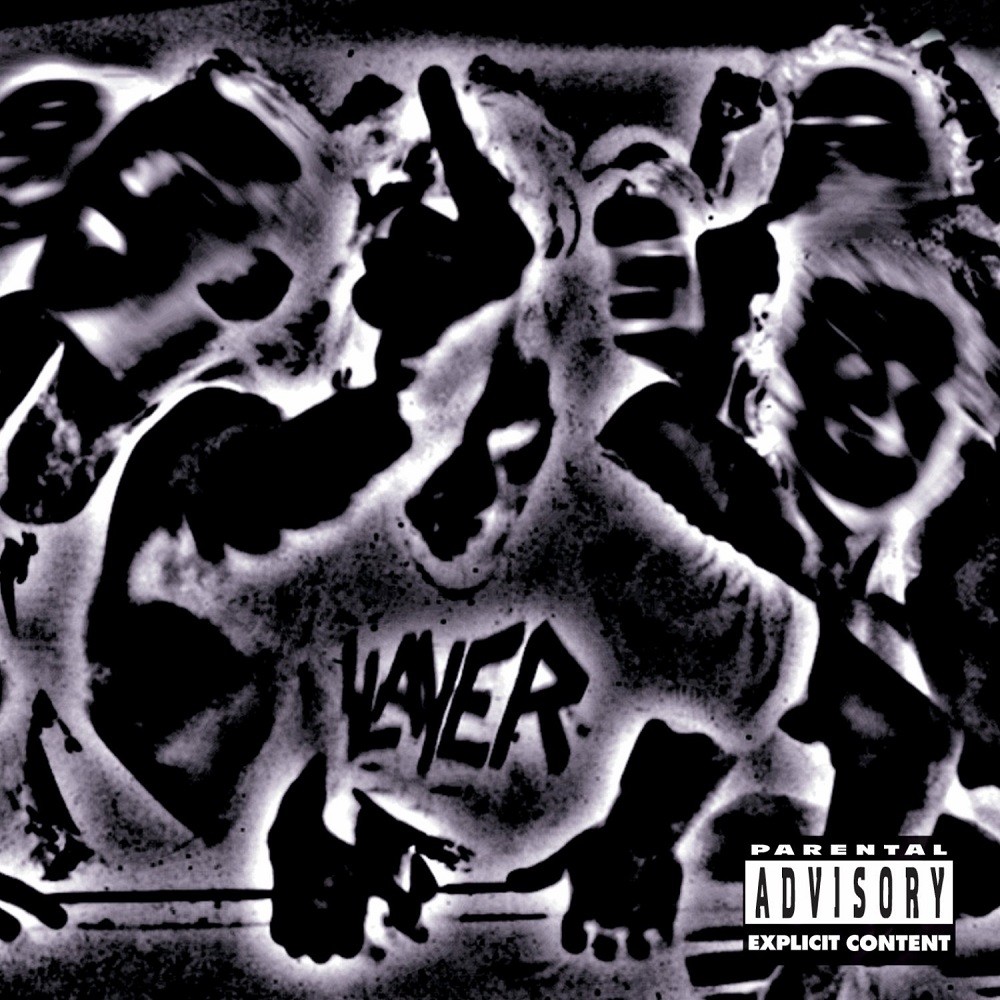 Here’s a question worth pondering. How much are a band responsible for the enjoyment of their fans? Are they obligated to stay within certain boundaries when creating material under a tried and tested moniker? If The Beatles had launched into grindcore halfway through Abbey Road, would they actually have broken some sort of virtual contract between band and fan that states “we will experiment and be creative, but we will never completely alienate you”? What about if Jimi Hendrix laid down his guitar and recorded sixteen variations of Mary Had a Little Lamb, then released it as Are You Experienced on the Recorder? Would it have been unreasonable for fans to be angry at Jimi personally? Now I’ll be the first to admit that Slayer releasing an entire album of hardcore punk isn’t exactly on par with the above imagined atrocities, but the question still seems valid. Fans of the band waited four long years for 1994’s mediocre Divine Intervention album and while I would have expected that the guys would have been keen to show that this Lombardo-less line-up still had what it took to create awesome thrash metal albums, another two year wait resulted n a piece of work that’s likely to please only the smallest minority of their fans. As disappointing as that was, it’s made even more distressing when you realise that Undisputed Attitude isn’t even the album the band set out to make.

The original idea for the album was for Slayer to pay tribute to the bands that “made Slayer what it is”. There’s no denying that punk played an important role in the creation of thrash metal, and Slayer were undoubtedly inspired by its high-octane energy and aggression when building their sound, but anyone who’s listened to their debut album Show No Mercy will know that the guys took onboard far more influences from traditional heavy metal than from punk. The original line-up of intended covers included tracks by Judas Priest, UFO, Deep Purple, Black Flag and even The Doors to go along with a small selection of hardcore bands. After a few rehearsals however, the band just couldn’t figure out how to make the heavy metal and rock tracks work and so a decision was made to focus entirely on punk. The result is a thirty-two-minute barrage of rebellious, aggressive punk tunes, with the majority being covers of apparently important bands such as Verbal Abuse, Minor Threat and Dr Know. I say apparently because I’ve never heard a single track by any of these bands and the only one on the entire album I have experienced previously is D.R.I.. I’m clearly in no position to be able to properly critique Undisputed Attitude and there’s no way that I would ever rate or review an album from this genre, were it not for the fact that the word Slayer is written across the front cover.

This of course brings me back to my original question. Does a band like Slayer have an obligation to their fans to release albums within certain boundaries? It might surprise you at this stage of my review that my answer is no. They can do whatever the fuck they want! Music would be a heck of a lot less exciting if bands were held to their fans’ wishes. But they must realise that the people listening to their albums have certain expectations which, if not delivered, will result in an inevitable backlash. Here is mine! Undisputed Attitude has a great punchy production and an unquestionable energy, with the quick-fire recording (three to four weeks) only adding to the urgency of it all. That’s about the only positive I can come up with however, as the music itself is one dimensional and simple to the point of complete boredom. The lyrics are immature to say the least and the delivery of them extremely monotonous. The two tracks written by Jeff Hanneman back in 1984 (Ddamm and Can’t Stand), which were originally intended for a side project called Pap Smear (with Dave Lombardo and Suicidal Tendencies guitarist Rocky George), do nothing to differentiate themselves from the rest (which I guess makes them a success). The only track I find remotely interesting is closer Gemini, which was written by King and Araya a few months prior to recording. It’s the only real Slayer track to be found on an album I’d rather not be subjected to again. Rant finished.

Sidenote: While I’d rather forget the year that was 1996 when it comes to thrash metal, it’s not likely to be a year that the members of Slayer will forget. During March of that year, fifteen-year-old Elyse Pahler’s body was discovered near her home in California. Elyse had been raped and murdered some eight months earlier by Jacob Delashmutt, Joseph Fiorella and Royce Casey, who then returned to the corpse several times to have sex with it. The body was only found after Casey confessed to the murder after converting to Christianity, and all three would eventually plead no contest, getting twenty-five years to life in prison for their acts of murder and necrophilia. Where does Slayer fit into this tragic story? Jacob, Joseph and Royce claimed to authorities that they murdered Elyse as part of a satanic ritual, as they needed to commit a “sacrifice to the devil” to give their heavy metal band, Hatred, the “craziness” to “go professional”. Elyse’s parents later accused Slayer of encouraging the murderers’ actions and brought a lawsuit against the band, stating that Slayer distribute harmful products to teens, encourage violent acts through their lyrics and that “none of the vicious crimes committed against Elyse Marie Pahler would have occurred without the intentional marketing strategy of the death-metal band Slayer”. The lawsuit was eventually dismissed in 2001, with Judge E. Jeffrey Burke stating, “I do not consider Slayer’s music obscene, indecent or harmful to minors”.

When I first heard this release back in 1996 I was very disappointed. Slayer was my all-time favourite band & they'd never failed me before but this time I was left feeling empty. In time I've come to find it a little more appealing but I don't think it's ever going to get regular revisits. Don't get me wrong. This is not a bad hardcore punk record. The Slayer sound & production works quite well & there's plenty of energy. Tom Araya's vocal style really suits the material too but ultimately I'm just not a fan of the hardcore punk genre. I listen to Slayer to experience the pinnacle of metal so this album was always going to be fighting a losing battle with me. Closing track "Gemini" is the only true Slayer material included & while it's a pretty decent song it also sticks out like a sore thumb amongst the rest of the stuff on offer so I have to question why they chose to include it at all. "Undisputed Attitude" will certainly appeal to hardcore punk fans as these guys really know what they're doing but if you're looking for that classic Slayer sound you may want to look elsewhere.