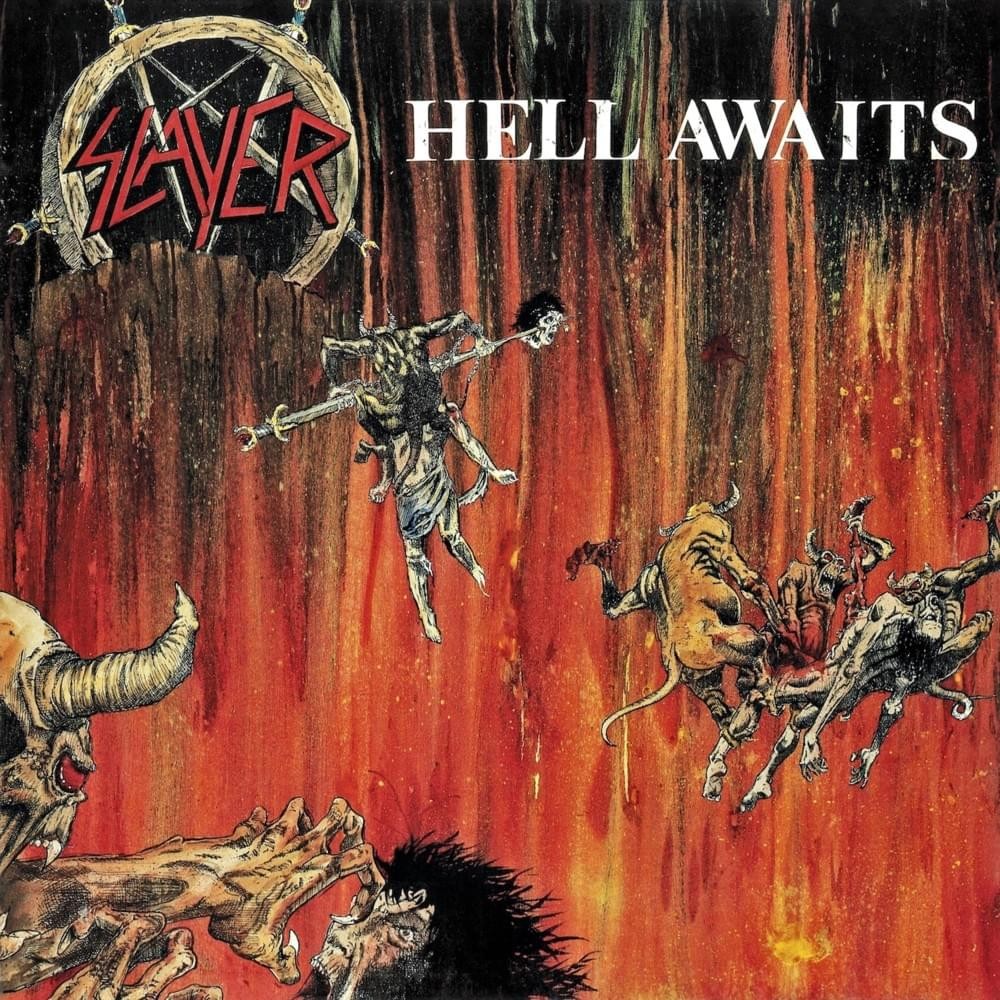 Slayer leave their influences behind and unleash an evil and aggressive maelstrom of thrash metal.

Slayer had been tremendously active since the release of their Show No Mercy debut album. Not only had they released the three track Haunting the Chapel EP and the Live Undead record, they’d also toured extensively with the likes of Venom and Exodus, all before the end of 1984. Guitarist Kerry King also played a few live gigs with Megadeth during the same period while Dave Mustaine was trying to find a second permanent guitarist. Mustaine assumed that King would become a full-time member of his band, and Slayer was clearly concerned with his involvement. Hanneman was even quoted at the time as saying “I guess we’re gonna get a new guitar player” in an interview. As it turned out, King left Megadeth after only five shows, causing a long running feud between the two legends that continues today. With the band still intact, Slayer entered the studio to record their second full length album in early 1985. This time around they’d have a decent recording budget which would allow them to hire professional assistance, a reward for the success they’d already brought to label Metal Blade Records after self-financing Show No Mercy. Hell Awaits was released in September 1985 and along with the step up in production, finalized the formation of a unique identity for Slayer that would stay with them for decades to come.

While Show No Mercy found Slayer imitating their favourite NWOBHM bands, albeit at higher speed and aggression, the Haunting the Chapel EP had really upped the ante on the darkness and pure thrash metal aspects of their sound. Hell Awaits would take this one step further in no uncertain terms and the whole package was given a morbid makeover. Albert Cuellar, who produced the iconic artwork for the Live Undead release, supplied one seriously attention-grabbing cover complete with demons in hell mutilating the bodies of the damned, and this alone suggested something much more sinister was contained within Hell Awaits. The satanic themed lyrics and imagery that had previously been utilised in moderation now took centre stage, suggesting King and Hanneman had been given full responsibility for that department, with Araya’s war and world issue themes nowhere to be seen. Tracks like Hell Awaits, Kill Again and Necrophiliac were more confronting, not to mention controversial, and fans lapped it up instantly. Musically the band had dropped the heavy metal aspects altogether, with no sign of melody, and added an increase in aggression to all elements of their sound. Monstrously evil riffs, chaotic leads, malice filled vocals and crushing drumming fill every moment of Hell Awaits and the true Slayer sound was at last fully formed.

The production on Hell Awaits is by no means perfect, but it was far superior to Show No Mercy. The bigger budget gave the band more freedom to record the way they wanted to, with Lombardo particularly happy to not have to overdub the cymbals, as he was forced to do on the debut. They also included some neat audio effects, with none more powerful than the ones used for the truly awesome intro. It’s unsurprising that Slayer would open most of their concerts for the next decade with Hell Awaits. Its increasingly audible build-up of feral guitar spasms and repetition of the words “join us” in reverse is both foreboding and excitement-inducing, and while it’s only around a minute in when a roar of “welcome back” blasts out of your speakers and the guitars and drums kick in, the vicious scene has truly been set. All that was needed to make Hell Awaits one of the greatest openings to any album in metal history was a decent riff or two and Slayer came up with four absolute ripsnorters back to back before the first line of lyrics are spat out. While this sort of inspired song structuring doesn’t persist for the album’s thirty-seven-minute running time, Hell Awaits unquestionably displayed a level of progression and complexity that would define their later material and inspire others in their wake.

Araya emits blasphemous lyrics at such velocity that it sounds like he’s struggling to keep up with the shredding riffs around him. He may not be passionate about the subject matter that his band mates placed in his hands, but you wouldn’t know it from his menacing performance. It’s also worth noting that his bass is more audible on Hell Awaits than is the norm for Slayer albums. He has a career long habit of merely playing along to the riffs rather than adding anything of substance, which often means he vanishes into the mix, but on Hell Awaits he’s given such volume that you can’t help but pay attention. Lombardo on the other hand really came into his own on this album and his newfound double bass skills are put to good use. The beefed-up production and improved recording circumstances helped him show the metal world just how much talent he possesses, and the scene awards were soon to come flowing in. But Slayer has always been based around awesome thrash riffs and King and Hanneman produce too many rippers to mention here along with their inimitable frenzy of leads. Each member of the band is close to the top of their game here and the result is damn good thrash metal in its purest form. Slayer would undoubtedly go on to produce better albums, but Hell Awaits is enormously significant and still entertaining twenty-five years on.

When Slayer’s debut album rose from Hell in 1983, there was really nothing like it, and it sat comfortably atop the heaviest, fastest, most evil records in the world. Times had changed, and for metal, that meant pushing boundaries. Many bands heard Slayer and those who didn’t try to do exactly what they did, tried to up the ante.

So when Slayer went to record their sophomore album, they didn’t create Show No Mercy vol. 2. They had been listening to Mercyful Fate, and were inspired to create more complex song structures, longer and more varied compositions. However, they would sacrifice none of their brutality in doing this. The complex song structures allowed them to capitalize on their ability to create a truly evil, infernal mood; this is captured best on the opener “Hell Awaits,” with its backwards chanting and plentiful mid-tempo sections between the assaults of speed. Dave employs double bass drumming on every track, rather than occasional bursts. Tom’s bark, while definitely solid on the debut, was perfected here. He rattled off vicious lines at a speed unheard of, and despite pushing his vocal chords to their aggressive limits, remained intelligible the whole time. For me, this is the Slayer album that actually took the longest to love, but that’s a testament to the depth and timelessness of the album itself.

Slayer didn’t exactly invent a new genre with this album, but despite the Thrash label, it was more important to the development of Death Metal than anything. Slayer abandoned most of their punk roots here (Though they’d bring them back for the next album) and the sound is unmistakably darker. Possessed’s Seven Churches is awarded the title of first Death Metal album, but it’s a short step from Hell Awaits, and had death growls been employed here, the music would sound right at home on a pure Death Metal record.