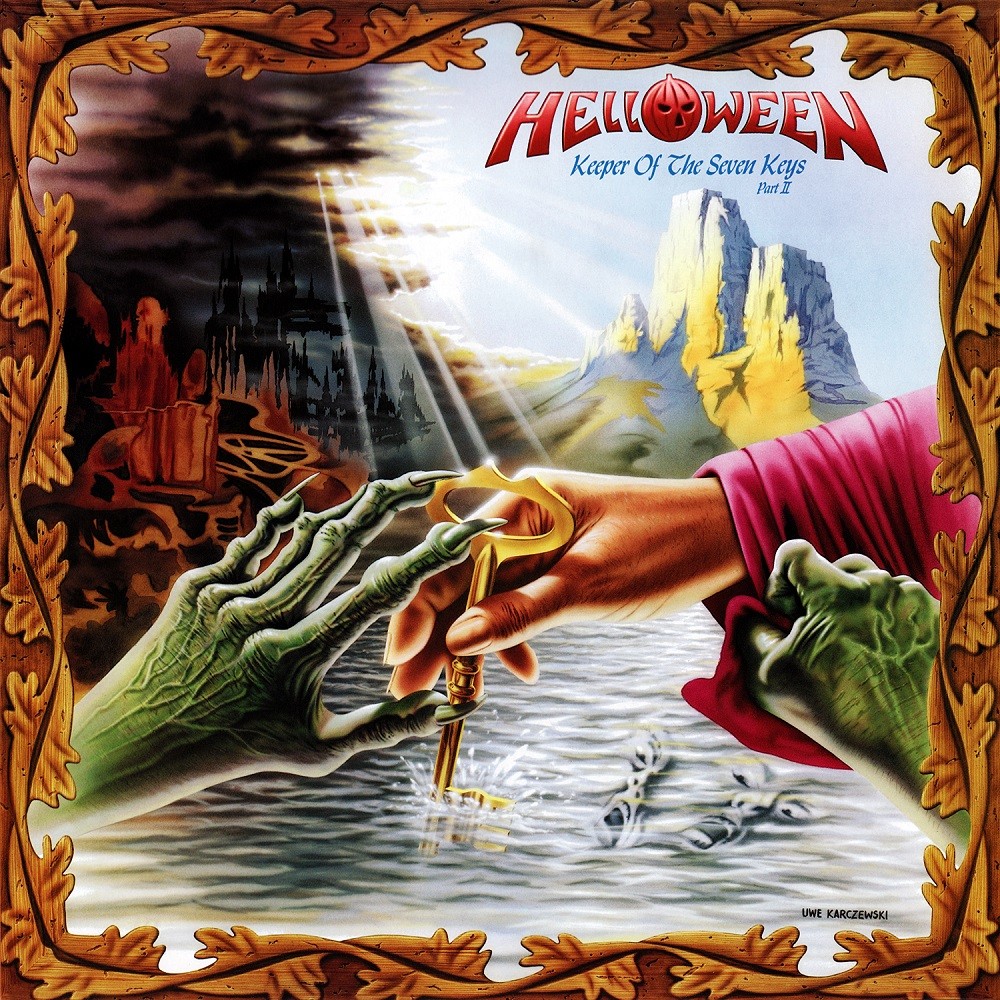 Power Metal has always been a very divisive subgenre with the metal community. This division has been a persistent issue since the genre's formation and boom during the late 1980s and into the 1990s. And Helloween are this genre tags most well known and respected band. Their debut E.P. as well as the three subsequent full length albums that followed, are considered high art by those who enjoy it.

Now, forgive me for being naive, but I've never cared for Helloween. I have always believed that when matched side by side with the artists that they were trying to invoke, Helloween always felt a step down. Their biggest love is clearly Iron Maiden, and that is a high bar to live up to for sure, so I don't blame them too much for that.

What I will say is that in comparison to the power metal bands that followed into the 1990s, Helloween did not age very well at all. And Keeper of the Seven Keys Part II  is no exception. The production and compositions on this album falls very flat very quickly. For starters, the guitars are not mixed all that well. Sure they sound fine, but many of the rhythmic passages feel undercooked and lacking a significant low end to really drive them forward. The melodic passages are much more enjoyable because the bass does sound pretty good throughout the entire project thanks to Markus using the fretless variety. Percussion is pretty standard by definition in Power Metal. And Michael Kiske does a very solid Bruce Dickinson impersonation here, but loses his individual identity pretty quickly.

As for the compositions, I found far too many times that the tempo changes and development of ideas felt forced. The tempo changes just show up out of nowhere with nothing to prepare them and the development tries overlaying some melodic counterpoint in the lead guitar or vocals, but doesn't introduce these ideas initially to make the combining of the two hit harder. And of course, the hooks. For as nice of a sound that Helloween may have, I cannot recall at least half of this album. I mean, the album starts off very well with "Eagle Fly Free" and I have a blast with "March of Time", but tunes such as "Rise and Fall", "Mr. Stein" and "We Got the Right" are just in one ear and out the other.

For comparison sake, I decided to listen to Queensrÿche's album of the same year, Operation: Mindcrime. And what I ended up finding was an album that was able to grip me and carry me along for the ride with greater consistency. As for Helloween, I won't deny that they do have a mostly enjoyable sound and I am not going to shun anyone for enjoying them. But Keeper of the Seven Keys Part II offers a lot less today than it did back in 1988 and Blind Guardian easily surpassed them entering the 1990s.

Although the name is misleading, this album and part 1 are not two-part concept albums, and actually seem to be completely unrelated in terms of themes. This album, in my opinion, is superior and much better represents the genre of Power Metal.

While Part 1 abandoned the band’s Speed Metal energy and aggression in favor of complete melody, this album brings back the intense speed of the debut while retaining extremely melodic and uplifting songwriting, resulting in a concrete example of fully formed Power Metal. This album, like Part 1, is incredibly diverse, both in terms of themes and songwriting, with incredibly poppy numbers sitting between hyper speedy power assaults. Thankfully this album is much more consistent quality-wise, apart from the silly Dr. Stein every song is very strong.

Another note – they really went off the wall stylistically here. The lyrics are insane as are some of the sounds they throw in. It’s kind of off putting at times, but on the other hand it’s one of the most fun-sounding records I’ve ever heard. Definitely one of the first and best examples of metal not being dark in any sense.

I've never listened to Helloween. Really, never! Not even during my power metal taste from my high school years (not that I ever was in high school). Perhaps the band was a bit too old for my taste, and I'm sure there were newer bands like DragonForce that saved me from a lifetime supply of radio pop sh*t. I think adding in Helloween as the first band of my Ultimate Metal Family Tree band challenge was a great decision, because now I can hear whether or not this truly is an immortal album in power metal.

After the speedy Walls of Jericho, the Keeper of the Seven Keys albums took the band's influences from the mid-80s eras of Iron Maiden and Judas Priest and refined them with a fantasy twist, still shocking the metal scene for over 3 decades. O.G. power metal fans would never skip any song in the album, though I might for a few songs.

The album starts with "Invitation", a keyboard-symphonic intro that would later inspire the symphonic metal genre to come years later. Then we head to the catchy melodic power metal classic "Eagle Fly Free". A great start to the power metal action, though the next few songs don't reach that classic level. The next track "You Always Walk Alone" just stands in the middle, quality-wise. However, it's still better than the next two weaker tracks.

The lousy "Rise and Fall" shouldn't exist in this album. If I was an executive, I would tell Helloween to take that song out of the album. Really, it's a song that even during my teen power metal years, I would never like it no matter how much I try. The vocals, guitars, and sound effects in that song make it more worth being a B-side or put in the humorous Pink Bubbles Go Ape. "Dr. Stein" doesn't help much. That one I would've like years ago when I was more into the melodic side of power metal, but now I can barely tolerate it. Why was that released as a classic single? It hasn't aged well, and the sound effects aren't worth it! The excellent classic song "We Got the Right" makes up for those mistakes with one of my favorite performances from vocalist Michael Kiske. The inventive guitar work is excellent, and the bass and drums are well-crafted.

"March of Time" is a strong technical melodic power metal tune. "I Want Out" is without a doubt one of the most recognizable songs by the band, maybe of power metal! It's been covered by various power metal bands including Gamma Ray (guitarist Kai Hansen's other band after getting out of this one), HammerFall, Sonata Arctica, Lord, and Seventh Wonder. An excellent classic! The 13 and a half minute title epic is magnificent. Nothing else to say except it can't surpass the previous album's "Halloween" (which I listened to once because of Dark Moor's cover of that song). The CD bonus track "Save Us" is good but ruins the ending the album could've had with the aforesaid title epic.

Let me just summarize KOT7K Part 2 by saying this album really is great! I can see how it changed the world of metal music, but I might not give another spin until say a couple years later if I somehow have a big taste change back to classic power metal. A few songs in here made me give this album 4.5 stars instead of the 5 stars the older power metal fans would give, but I still understand its shocking impact. Just ignore those "meh" songs and you have an essential power metal classic album in your hands!