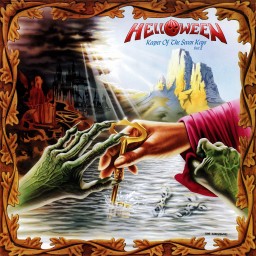 Power Metal has always been a very divisive subgenre with the metal community. This division has been a persistent issue since the genre's formation and boom during the late 1980s and into the 1990s. And Helloween are this genre tags most well known and respected band. Their debut E.P. as well as the three subsequent full length albums that followed, are considered high art by those who enjoy it.

Now, forgive me for being naive, but I've never cared for Helloween. I have always believed that when matched side by side with the artists that they were trying to invoke, Helloween always felt a step down. Their biggest love is clearly Iron Maiden, and that is a high bar to live up to for sure, so I don't blame them too much for that.

What I will say is that in comparison to the power metal bands that followed into the 1990s, Helloween did not age very well at all. And Keeper of the Seven Keys Part II  is no exception. The production and compositions on this album falls very flat very quickly. For starters, the guitars are not mixed all that well. Sure they sound fine, but many of the rhythmic passages feel undercooked and lacking a significant low end to really drive them forward. The melodic passages are much more enjoyable because the bass does sound pretty good throughout the entire project thanks to Markus using the fretless variety. Percussion is pretty standard by definition in Power Metal. And Michael Kiske does a very solid Bruce Dickinson impersonation here, but loses his individual identity pretty quickly.

As for the compositions, I found far too many times that the tempo changes and development of ideas felt forced. The tempo changes just show up out of nowhere with nothing to prepare them and the development tries overlaying some melodic counterpoint in the lead guitar or vocals, but doesn't introduce these ideas initially to make the combining of the two hit harder. And of course, the hooks. For as nice of a sound that Helloween may have, I cannot recall at least half of this album. I mean, the album starts off very well with "Eagle Fly Free" and I have a blast with "March of Time", but tunes such as "Rise and Fall", "Mr. Stein" and "We Got the Right" are just in one ear and out the other.

For comparison sake, I decided to listen to Queensrÿche's album of the same year, Operation: Mindcrime. And what I ended up finding was an album that was able to grip me and carry me along for the ride with greater consistency. As for Helloween, I won't deny that they do have a mostly enjoyable sound and I am not going to shun anyone for enjoying them. But Keeper of the Seven Keys Part II offers a lot less today than it did back in 1988 and Blind Guardian easily surpassed them entering the 1990s. 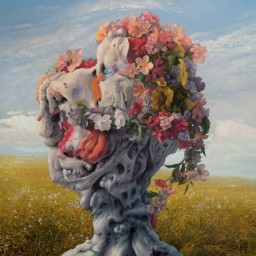