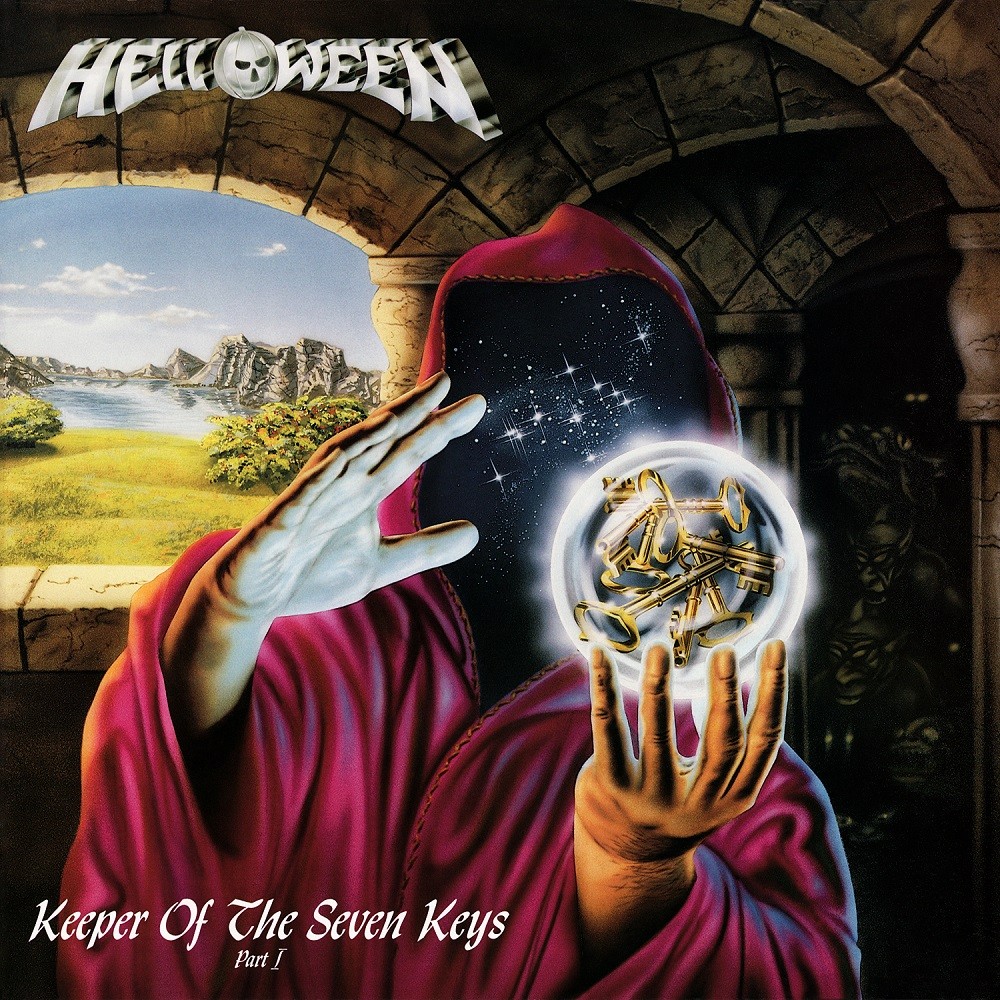 See, if I had gained appeal to the earlier 80s metal 5 years ago when my taste in power metal was more dominant, I would've definitely loved Helloween to bits. Now, having discovered this band late into a time when I care more about the heavier modern metal from my other clans (Gateway, Infinite, Revolution), the appeal has worn off slightly. I still enjoy an album like this, but not enough for a full-time dive into the rest of the band. But there's one thing I can't ignore about this album...

It's what many would consider a legend! The Keeper of the Seven Keys duo of Helloween albums started the genre I once totally loved that is European power metal. While not the absolute best album for me today, Part 1 is worth enjoying for straight catchy choruses. Sure there are poppy melodies, ridiculous lyrics, and cheesy vocals, but this record is committed to power and glory. For those wondering about the other weak part which is the album's length; two instrumentals and 6 songs in 37 minutes, the two Keeper parts were meant to be a 2-CD album, but their record label insisted that they record the first part and not record Part 2 until a year later as a separate album.

It starts with the beautiful memorable intro "Initiation". Then the first real song "I'm Alive" is straight power metal to blow your mind away with a then-new extraordinary metal genre. A great opening song to kick a**! "A Little Time" has a little time to slow things down for something more diverse, adding progressive influences in the middle inspired by Pink Floyd. Enjoyable, but nothing too new.

"Twilight of the Gods" is probably my favorite here with amazing bass, straight riffing, and melodic singing. A perfect prototype of the European power metal sound founded in this album! "A Tale That Wasn't Right" may be a soft ballad, but it's honestly emotional and surprisingly not so cheesy. A good slow break after going so fast earlier.

"Future World" is closer to happy partying heavy metal. Some might consider it the album's perfect single, but for me, it's just a silly embarrassment with not much profoundness in the lyrics. A rather poorly mixed track... "Halloween" makes up for that by a lot as the album's diverse 13-minute epic, with the most talent from every member of the band. So entertaining, atmospheric, and epic all at once! This is pretty much one of the first non-progressive metal tracks to reach that kind of length, kept interesting with mystical atmosphere to enjoy. It's probably the band's theme, and certainly covered by Dark Moor for a tribute album! "Follow the Sign" is an unnecessary outro. Of course, there are several bonus tracks in the expanded edition including two re-recordings, two shorter edits, and two B-sides, but I've described enough.

All in all, I can definitely see why this album is a classic and why some tracks deserve to be popular. This is the fast diverse energy of the European power metal they pretty much invented. There's so much talented power to pardon the bad lyrics and album's incompleteness. Anyone looking for where melodic power metal began, you've found it!

Favorites: "I'm Alive", "Twilight of the Gods", "A Tale That Wasn't Right", "Halloween"

Kind of mixing their first album and Fates Warning’s output, Helloween play fast, technical and progressive music here, but also make room for softer, catchier numbers. The aggression of their debut has been traded in for uplifting triumph. The album is a very eclectic package despite only having 6 full songs, and one would not want for variety here. The problem there is that the material is not very consistent, with their highs being fantastic and the lows just okay. The new vocalist is a welcome addition, but even he has some pitchy moments and questionable vocal melodies between the usually solid performance.

The track “Halloween” is actually a talking point in itself, being one of the most progressive epics in all of Metal at the time. At over 13 minutes, the song shifts through so many movements, it’s about as eclectic as the rest of the album. The difference here is that the track is very consistent throughout, full of the band’s best riffs and greatest vocal performance on the album. Really, there couldn’t be a better way to sing about Halloween.