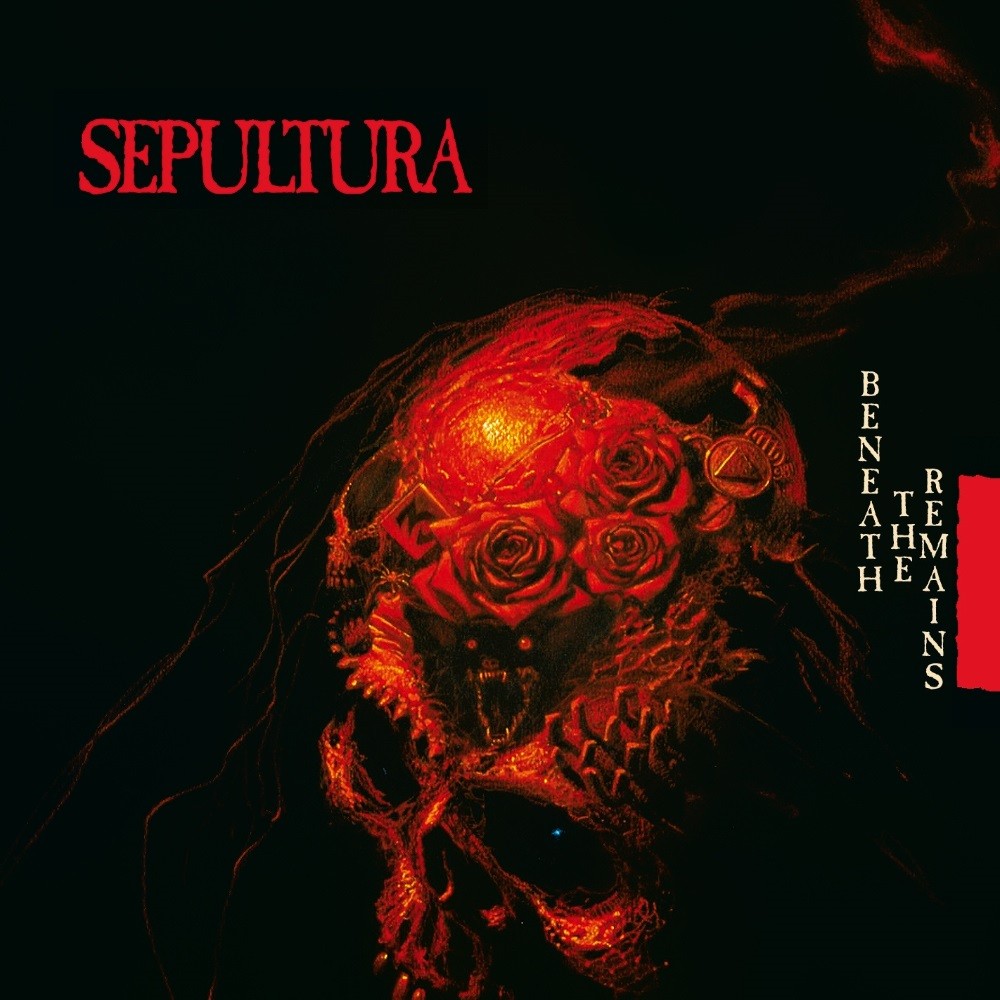 I have had an on/off relationship with Sepultura. Their Chaos AD album was my very first CD purchase and is an album I am still extremely fond of. However, their Roots and Against albums did little for me and I lost interest in the band. Beneath the Remains was released four years prior to Chaos AD and is a different-sounding record to that 1993 album. Based heavily on the Metallica / Megadeth sound BtR is classic 80's thrash metal with heavy, powerful riffs. A lot of people claim a death metal presence in here as well, but apart from maybe the vocals I'm sorry, I don't hear it. Igor Cavalera is a fantastic metal drummer and here puts in an exemplary performance behind the kit, propelling the songs along as much as Max and Andreas Kisser's riffs. The production was handled by Scott Burns and is excellent, Igor in particular benefitting from his expertise. Max Cavalera's vocals are powerful and are uniquely his own - being one of those singers you recognise immediately wherever you may hear him. The songs are fairly complex and the playing reasonably technical, but they still gallop along at a pace without becoming stacatto or disjointed as can happen with overtly technical metal. The 'A' side's four tracks in particular are exceptionally strong and the 'B' side doesn't quite maintain the momentum completely successfully, but this is just a matter of comparison and it's five tracks are still pretty damn good.
South America long remained a bastion for thrash metal even beyond the point where the rest of the world seemed to have abandoned it. Sepultura and this album in particular, are probably the main reason for that as bands from that part of the world attempted to emulate their local heroes and kept the thrash flame alive in the mountains and river deltas of the south american continent. That as much as anything pays testament to the value of the band and this album in particular.

A huge step up in production and songwriting quality, Beneath the Remains is an exhilirating thrash metal classic.

Sepultura’s second full length album Schizophrenia had finally given the band the international attention they deserved. In February 1988, Max travelled to New York to negotiate a deal with Roadrunner Records, which would surely give the band the type of budget and distribution that had simply not been available to them in their native Brazil. We can only speculate what occurred between Max and the label representatives behind doors, but we do know that it took them an entire week to come to an agreement. Despite Roadrunner offering a seven record deal to the band, they were clearly not certain that Sepultura were a profitable addition to their roster. They gave the band a peculiarly small budget ($8000) with which to record their first Roadrunner backed album. On the positive side, this did give them the opportunity to use a better studio than the limiting Estudios where all their material had been recorded so far, so the band booked Nas Nuvens Studio in Rio de Janeiro. What this miniscule budget didn’t allow for was the cost of a decent producer, but the metal gods were clearly smiling upon Sepultura at this time. After his stellar work with great death metal bands such as Obituary, Death and Morbid Angel, Scott Burns could easily demand large amounts of cash to produce albums, but his interest in travelling to Brazil and working with a non-English speaking band caused him to accept a measly $2000 for the job.

This was a vital decision for Sepultura as Burns brought with him a wealth of experience, helping the band to take the next step up in professionalism and quality. With the help of a translator, Sepultura and Burns worked between the hours of 8pm and 5am from the 15th to the 28th of December 1988 to record what would become Beneath the Remains. I’ve only recently noticed that there are a few websites around that suggest Andreas Kisser performed all bass on the album as opposed to Paulo Jr., but I have no definitive proof to say whether that’s truth or myth. Either way, once the tracks were recorded, Burns flew the result back to the States, where he personally mixed and mastered the album at the infamous Morrisound Studio in Florida. I assume that it was during this stage that a bunch of other Morrisound clients, including John Tardy from Obituary and Kelly Shaefer from Atheist, performed the gang style background vocals for Stronger Than Hate. Apparently Shaefer wrote all the lyrics for the track too and I can only assume this relationship was created through his association with Burns. Beneath the Remains would officially be released on the 5th of September 1989 and would be the first of four Sepultura albums to have cover artwork by Michael Whelan. This particular piece, entitled Nightmare in Red, holds far more complexity than what the viewer might initially see, and is strikingly set against a pitch black background for optimal effect.

Beneath the Remains was immediately met with international acclaim on release and listening to it over twenty years later it’s not hard to hear why. The step up in production and the finely tuned songwriting gave the album a consistent force that their previous albums could only display in patches. The band had evolved further away from death metal into a more pure style of thrash, but while there is little argument from a technical point of view, the Morrisound production combined with Max’s gruff vocals and Igor’s intense drumming style still give Beneath the Remains a death metal feel overall. The musicianship is first class with Igor marking himself as one of metal’s elite drummers with this album while Andreas and Max flawlessly execute exciting, memorable thrash riffs throughout. Andreas’ leads are fantastic and I’m not sure I’ve ever given him the credit he deserves for the simple reason that he doesn’t draw attention to himself. Every solo plays an important role in the surrounding track rather than simply show off the ability of the performer, and there really isn’t any filler material on Beneath the Remains whatsoever. It’s one classic track after another, with the likes of the title track, Inner Self, Stronger Than Hate, Slaves of Pain and Primitive Future all vying for highlight status. I can’t even consider not giving Beneath the Remains five stars which is not something I can say about anything Sepultura have released in the past fifteen years at least.

Sepultura was already delivering top tier riffs on their sophomore Schizophrenia, but unfortunately that album was plagued by awful production. Max’s English wasn’t great either, resulting in some awkward delivery in some places. Here, Sepultura finally get to solid ground and bring all of the strengths they already had to a more professional release. The production here isn’t anything to write home about, but it’s leagues better than what they were working with before. The monstrous riffs are back, but the rhythm section opts to change things up here and there. Instead of nonstop Thrash beats, there are slower and more technical moments, hints of their future Groove sound, yet they never steep into boring or repetitive territory.

Beneath the Remains doesn’t sound too different from other Death tinged Thrash of the late 80’s, but Sepultura start to add a political, conscious message here that sets them apart from the Satanic imagery of other bands. Max finally gets his voice down and writes some good lyrics here. A prime example of the heavier end of Thrash, and one of the finest albums released at the end of the decade.

I am a big fan of what I term to be "golden runs" of albums. A series of albums by the same band that show continued development and progress on each release, often taking what starts as a very raw and primitive sound that can rely on little more than attitude to carry it through a debut release and then watch that grow into a more refined yet by no means less threatening prospect.

An example of such a band is Sepultura. Their releases from 1985 through 1991 are a consistent and incremental improvement with each release. From the crudity and vulgarity of Bestial Devastation to the rabid and and yet systematic assault of Arise, the band's sound, stature and reputation grew steadily. By the time 1989 rolled around they had a record deal, a fledgling Scott Burns sat in the producer's chair and a hastily written album to deliver.

They missed their first recording deadline for this record. They simply did not have enough material written by the time Roadrunner had signed off on the deal. Despite years of waiting for the big contract to become a reality, Sepultura weren't actually ready when the time came.

This could so easily have been a disaster. Running late on the timeline, with a producer who had never done the job solo before (let alone outside of Morrisound Studios back home in Florida) all with a language barrier to overcome to boot. The fact that anything got recorded at all is a real feat in itself.

Beneath The Remains sent Sepultura into the upper stratosphere of not just thrash metal but metal in general. Hailed as a rival to Reign In Blood at the time (it isn't to my ears btw) the raw brutality of the riffing style of the band came alive in the hands of a good producer in a decent studio. The fury and range of the vocal and rhythmic abilities of the Cavalera brothers were captured superbly and the excellence of their songwriting shone for the first time.

The essence of many albums on that land on "best of" lists is that they not only represent landmark releases for the year for me but also landmark releases for the bands also. Sepultura had one more trick up their sleeve when they released Arise some two years later, an album which was the very pinnacle of their powers. But Beneath The Remains wiped the floor with all other thrash releases in 1989 and was a release from a band truly hitting their stride.