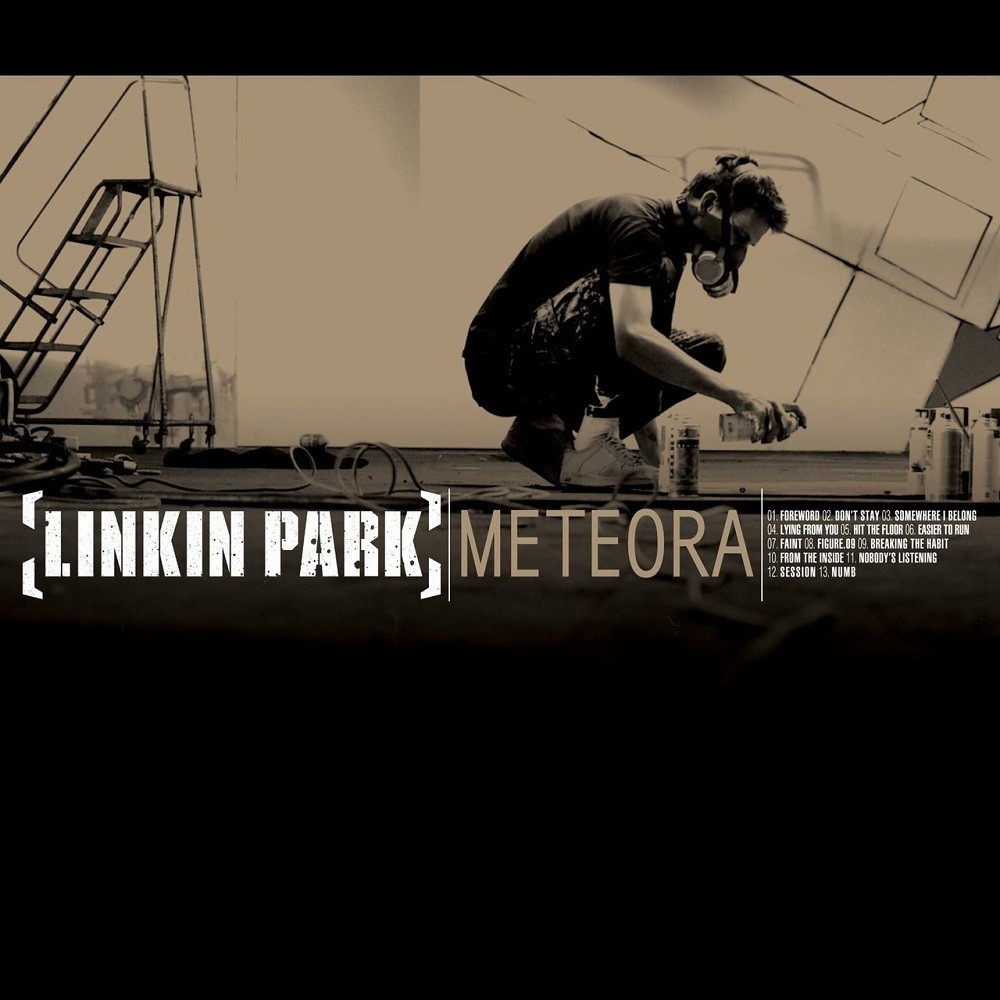 Linkin Park's second studio album, released in 2003, comes at a time when nu metal, which the band helped popularize at the turn of the century, was in full decline. Fed up with the repetitive song structures, whiny lyrics and image-pandering "pop bands", fans were either drifting away from the fad, or moving on to pastures heavier. But 'Meteora' ensures that the genre would go out with a huge bang.

The band were all in their early twenties when their 2000 debut album, 'Hybrid Theory', made them one of the biggest acts on the planet. And three years later, you can see how they've matured as songwriters. While the music and lyrical themes are similar as before, there's just something in the songs that sound more polished and refined.

Taking the "less is more" mentality to the limit, the band have really hit their stride with their sound. Most of the songs barely hit the three minute mark, and the arrangements are almost identical in each track. But the Californian six-piece do it with such gusto that it's hard not to be impressed. In particular, vocalists Chester Bennington and Mike Shinoda have formed a duo that has become instantly recognizable, with both men's respective styles complimenting each other perfectly.

Highlights include 'Somewhere I Belong', 'From the Inside', 'Faint', 'Breaking the Habit', 'Don't Stay' and 'Easier to Run'. And of course, there's the absolute monster hit 'Numb', that has remained one of the bands most popular tracks. Even the unusual hip hop-inspired 'Nobody's Listening' is catchy, and really highlights the chemistry between the two singers.

While 'Hybrid Theory' had some absolute bangers, it also had its fair share of fillers. Which is where 'Meteora' is an improvement, in that it's a lot more consistent with a lot of really strong tracks. In fact, my only real complaint is that some of the songs could have been a bit longer. Regardless, 'Meteora' is a fantastic album that gave nu metal one last shot at showing the world what it was capable of, and sales in excess of 25 million copies says that they did the genre proud.

Linkin Park was a band with elements of many genres combined into one back then. Turntable scratching, heavy yet simple riffing, big bass bursts, metalcore screaming, and fast meaningful rapping are all combined into their modern popular style of nu metal. They released their breakthrough debut Hybrid Theory, and they continued what they had in their greater second effort Meteora! This album is in some ways a sequel to Hybrid Theory. Just like that debut, Meteora is around 37 minutes long with 12 songs (this album has an intro that doesn't count), each at a length range from two and a half minutes to slightly over three and a half. However, each song continuously blends into one another, much more than their debut. You might be annoyed if you just wanna hear one song, but it's great because it sounds like a concept album to me.

Basically, they're on the opposite side from System of a Down when it comes to alt-metal creativity. They're still in their own box, lacking any bridges extended with soloing. The band members can be so modest, not showing off their playing abilities. The stronger points are the good drumming and, of course, the vocals. Mike Shinoda continues his incredible poetic rapping and also put the songs together well as co-producer, while Chester Bennington has great singing range (RIP, my great dude). This album is pretty great, slightly better than Hybrid Theory while still not pushing the envelope a lot, and I'm almost completely over my pre-real-metal days of this band.

The "Foreword" is a short unnecessary intro, but a neat start. "Don't Stay" is the real opening song with great heaviness. This is another song where Brad Delson tunes down to drop B tuning (also used in the debut's "With You" and "Runaway", I think), instead of the usual E-flat/drop D-flat (to appear later), and it's great! Chester does an awesome mix of singing and screaming. The scratching is awesome as well. "Somewhere I Belong" is more melodic with incredible emotion. There's powerful guitar along with great vocals alternating between rapping and singing. The lyrics are a bit forced and unable to flow well, but the song is still awesome. "Lying From You" has the best guitar riffing here with greatly intense sound. However, Mike's rapping seems to spike in tone which is annoying. So are the otherwise cool bass bombs. "Hit the Floor" is also annoying in the vocals, but Chester's smooth singing in the last line of the chorus is greatly performed. The guitars explode but never beyond its simple point. A low point in this album...

However, "Easier To Run" has slower drama. Chester sings in beautiful peace, and the same can be said for Mike's rapping. The guitars have nice flow. The drum beat is interestingly single yet having some complexity. Everything is put together without being forced. "Faint" is a sudden change of mood that can get you pumping and jumping. The drums are faster with nice guitar layers, though not reaching its strong point until the bridge. Great single! "Figure .09" begins with interesting turntabling and tapping, and the guitars stay solid. Mike's rapping starts smoothing in the verses until the intense bridge with Chester screaming. Pretty good! "Breaking the Habit" is a step towards their later material, with the vocals being only Chester's singing with more emotion, along with digital effects. Excellent single, but not enough to make the high-quality half.

"From the Inside" is not the most popular song of the album, but my absolute favorite here. This song takes on a heavier side of rock, as Chester sings smoothly in the verses (along with Mike's rapping), gets coherently stronger in the chorus, and finally reaching the repetitive yet good brutal bridge (in the same level as the "SHUT UP!!" bridge from "One Step Closer". The guitar is not really the best, but everything else makes up for it. "Nobody's Listening" is a different departure from their earlier material. It opens with a strange Eastern flute loop and programmed beat. The lyrics are great, though the song is too experimental for my interest. Speaking of experimentation, "Session" is a two-minute digital-sounding interlude with nice piano and scratching from Joe Hahn. It's this album's "Cure for the Itch"! "Numb" is the second-best song saved for last, and probably their most successful song ever! The song can be found anywhere in the public, and even my friends from the outside world like it. Chester does melodic singing throughout the verses and chorus while getting rough in the bridge. The piano is awesome. The guitar sounds weak, but I don't care. "Numb" is Linkin Park's ultimate anthem!

All in all, Meteora is a slightly better effort by the ultra-popular Linkin Park, thanks to powerful guitar, strong lyrics, great vocals, and NOT the limited uniformity. Once again I enjoy all 5 singles along with 3 other songs. The only weak songs are the promo single "Lying From You" and the remaining 3 songs (4 with the "Foreword"). Sadly, all albums after would not have as much heaviness as this album and Hybrid Theory. If you love Hybrid Theory, you can't miss Meteora. Might not sound the best, but it's worth it....

Nu-metal is a subgenre that I have criticized quite extensively in the past and it is clear to see why. For starters, much of the appeal of this music is towards adolescent teenager who want to rage at their parents because they didn't receive their allowance money for the week. And it helped harbor in the next "Kyle" generation. You know the meme; the guy who just drank five tall cans of Monster Energy and punches holes into drywall. That's the image of nu-metal for me.

And for a while, Linkin Park fit into that mold as well. This L.A. based group had the DJ scratching as well as Mike Shinoda's rapping vocals. And they were etched together with some very sticky hooks from Chester Bennington as he flip-flopped between clean singing and harsh screams. The debut record Hybrid Theory is one of the highest selling heavy metal albums of all time, but it still felt very amateurish. Songs like "One Step Closer" and "Papercut" felt a lot like lyrics you might read in a thirteen year old private diary. Some hooks were fine, and the anger felt justified, but even today, it is not an album I want to visit more than I have to.

In 2003, the band decided to grow up and create what I still view as the best display of nu-metal that I have ever heard. This album felt like it came from a place of wanting and perhaps desperation. Is it catered to a younger, immature audience? Of course it is. But the stickiness of the melodies and the greater attention to maturity was promising, even if the growth ended up taking this group to questionable places and, unfortunately, led to this bands demise.

One thing that Linkin Park were impeccable at was creating mammoth hooks. Whether it be the titanic "Faint", or the more subdued "Somewhere I Belong" or "From The Inside", this record sticks with you. But where they managed to improve dramatically from Hybrid Theory to Meteora is the control. For one, the guitars sound much better during the album's more restrained moments, while still being able to pack a huge punch the way that they did on Hybrid Theory's most intense moments. Chester has a dynamic vocal range as his melodic singing during "Breaking The Habit" and especially "Numb" are far more controlled, before he enters into the heights of his vocal ranges during the choruses. And heck, even the DJ scratches and other synth effects don't feel as intrusive or bloated as the debut's most contentious moments.

Lyrically, there isn't much to say. Linkin Park were still nu-metal and the occasional screams of Chester on "Lying From You" and "Faint" are just what a thirteen year old me would have wanted, as opposed to the constant barking of a Corey Taylor in Slipknot. But this album is far less angry and more introspective and almost existential. There are themes of resentment towards a partner on "From The Inside" and "Numb", while "Breaking the Habit" and "Easier to Run" see our protagonist in a very bad place. A character that desperately needs help from someone, even though they feel like no one is there to support them. It is quite haunting to think about these lyrics when the fate of Chester Bennington was created in large part because of these thoughts of alienation and loneliness.

As I said off the top, nu-metal has a bad reputation and most of it is deserved. Linkin Park's biggest sin is that they became the prototypical next generation of nu-metal in the early 2000s, and their music was inescapable. I don't know how many others are going to feel the same way about Meteora as I do, and I am willing to accept that; it is a very timely piece after all. But this album is the apex of what nu-metal was. The rap-rock crossover was never stronger than this, going so far as to call on Jay-Z with the Encore tapes just a year later. This is a part of me that I will never be able to be rid of, and I'm glad it was this instead of something else.